A Brief History of MANPADS: Syria Edition : syriancivilwar. Schaftenheimen comments on What is even happening in Syria right now? 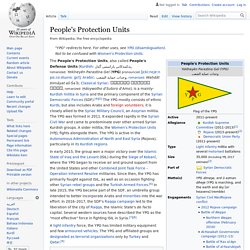 The YPG was formed in 2011. It expanded rapidly in the Syrian Civil War and came to predominate over other armed Syrian Kurdish groups. A light infantry force, the YPG has limited military equipment and few armoured vehicles. History[edit] 2004: Early origins[edit] Free Syrian Army. Riad al-Asaad stated in October 2011 that the Free Syrian Army (FSA) has no political goals except the removal of Bashar Assad as president of Syria.[20][21] The FSA has also claimed that the conflict is not sectarian, that they have in their ranks Alawis who oppose the government, and that there will be no reprisals if it falls.[22] On 23 September 2011, the Free Syrian Army merged with the Free Officers Movement (Arabic: حركة الضباط الأحرار‎, Ḥarakat aḑ-Ḑubbāṭ al-Aḥrār) and became the main opposition army group.[8][23][24] By July 2012, there were over 100,000 defectors from the armed forces reported, according to activist and media sources.[25] About a year prior, American intelligence sources gave estimates of more than 10,000 defectors.[26][27] The actual number of soldiers defecting to the Free Syrian Army is unknown.[28][29] The FSA operates throughout Syria, both in urban areas and in the countryside. 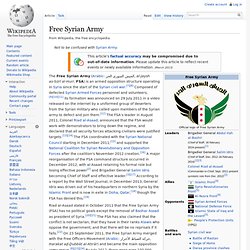 History[edit] Origin[edit] Formation[edit] Syria's Children. Disturbing Satellite Images Show How The Lights Have Gone Out In Syria. Official: After 134 days of fighting, the Kurdish city Kobanê has been liberated and is free from ISIS. : worldnews. Drought helped cause Syria’s war. Will climate change bring more like it? Francesco Femia and Caitlin Werrell are co-founders of the D.C. 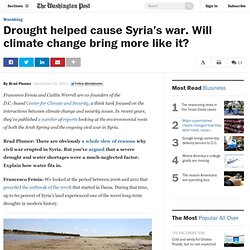 -based Center for Climate and Security, a think tank focused on the interactions between climate change and security issues. In recent years, they've published a number of reports looking at the environmental roots of both the Arab Spring and the ongoing civil war in Syria. Brad Plumer: There are obviously a whole slew of reasons why civil war erupted in Syria.

But you've argued that a severe drought and water shortages were a much-neglected factor. Explain how water fits in. Francesco Femia: We looked at the period between 2006 and 2011 that preceded the outbreak of the revolt that started in Daraa. Did climate change contribute to the Syrian conflict? This drought — combined with the mismanagement of natural resources by [Syrian President Bashar] Assad, who subsidized water-intensive crops like wheat and cotton farming and promoted bad irrigation techniques — led to significant devastation. So what would that mean? Answers about the Syrian crisis. Syria crisis: UN receives Syria chemical treaty papers. 12 September 2013Last updated at 13:09 ET The BBC's Jeremy Bowen was in the town of Maaloula The UN has confirmed it has received documents from Syria on joining the Chemical Weapons Convention, which outlaws their production and use. 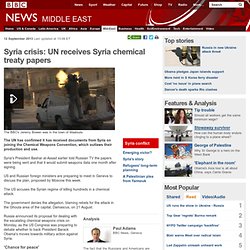 Syria's President Bashar al-Assad earlier told Russian TV the papers were being sent and that it would submit weapons data one month after signing. US and Russian foreign ministers are preparing to meet in Geneva to discuss the plan, proposed by Moscow this week. Arguss comments on Why does the president seem so personally interested in action against Syria? Syria in Five Minutes.