US of A and Syria

A U.S. strike on Syrian civilians, subsequent cover-up, and questions about how the U.S. wages war. U.S. military commanders covered up an airstrike over Syria that killed several dozen civilians, dishonestly portraying it as a successful attack against ISIS fighters and ignoring firm recommendations—filed by military lawyers—to investigate the strike as a war crime. 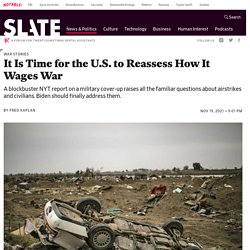 The attack and subsequent cover-up—revealed in a long, extensively documented story in this weekend’s New York Times—took place in 2019, during the final phase of the U.S. and allied campaign to oust the Islamic State from its self-declared caliphate in Syria. The Times report comes a few months after the final U.S. drone strike in Afghanistan in August, which Pentagon officials touted as halting a terrorist attack—but which in fact, as another Times investigation soon revealed, killed 10 civilians, none of whom had any connection to terrorists. The Syria Strike Was International Security Theater. It was designed to look as if it would keep us safer, while actually doing nothing of the sort. 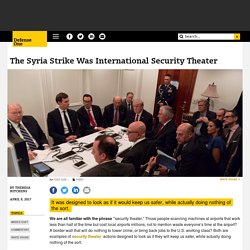 We are all familiar with the phrase “security theater.” Those people-scanning machines at airports that work less than half of the time but cost local airports millions, not to mention waste everyone’s time at the airport? A border wall that will do nothing to lower crime, or bring back jobs to the U.S. working class? Both are examples of security theater: actions designed to look as if they will keep us safer, while actually doing nothing of the sort. Seven Disturbing Implications of Trump's Syria Strike. When the Electoral College elevated Donald Trump to the presidency, it conferred on him the awesome life-and-death powers that attend the office. 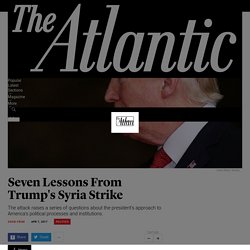 It was inevitable that President Trump would use those powers sooner or later. Now he has. Here’s What US Missiles Hit At the Syrian Airbase. And why Shayrat Airfield’s runways weren’t one of the targets. 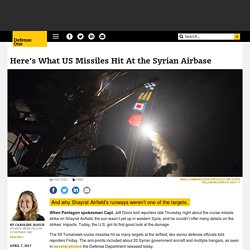 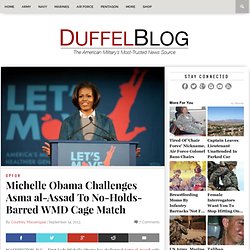 “Asma al-Assad. Whatchagonnado when the Let’s Move! Coalition goes wild on YOU?” Said the First Lady to television cameras broadcast worldwide. Syria Intervention Plan Fueled by Oil Interests, Not Chemical Weapon Concern. On 21 August, hundreds – perhaps over a thousand – people were killed in a chemical weapon attack in Ghouta, Damascus, prompting the U.S., UK, Israel and France to raise the spectre of military strikes against Bashir al Assad’s forces which, they say, carried out the attack. 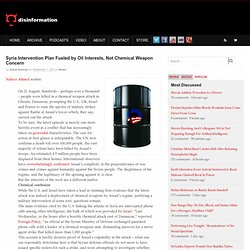 “Experts” Who Are Always Wrong About Everything Want to Bomb Syria. The Weekly Standard has an open letter explaining that blowing up lots of stuff in Syria is a great idea: The signatories on the letter addressed to President Obama inlcude Senator Joe Lieberman, Bernard-Henri Levy, Karl Rove, Bill Kristol, Elliott Abrams, Leon Wieseltier, and many others. 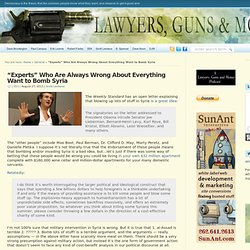 The “other people” include Max Boot, Paul Berman, Dr. The Arab world has harbored fantasies about the supernatural power of the United States - Conflict & Intl. Politics - Heinrich Böll Foundation. US Praises Massacre Of Syrian Civilians Without Use Of Chemical Weapons. Syrian President Bashar al-Assad WASHINGTON D.C. – Department of Defense and White House officials praised the actions of the Syrian government for their mass slaughter of defenseless civilians through non-chemical means this weekend. 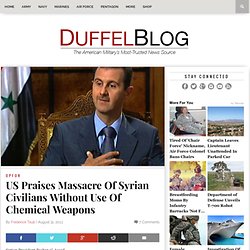 “When we heard that there was another incident in a small suburb outside Damascus,” said Pentagon spokesman Maj. Daniel Michaels in a press conference, “There was great consternation that it may have been another use of chemical weapons of mass destruction by the desperate Assad loyalists.” U.S. 'planned to launch chemical weapon attack on Syria and blame it on Assad' Leaked emails from defense contractor refers to chemical weapons saying 'the idea is approved by Washington'Obama issued warning to Syrian president Bashar al-Assad last month that use of chemical warfare was 'totally unacceptable' By Louise Boyle PUBLISHED: 14:16 EST, 29 January 2013 | UPDATED: 14:16 EST, 29 January 2013 Leaked emails have allegedly proved that the White House gave the green light to a chemical weapons attack in Syria that could be blamed on Assad's regime and in turn, spur international military action in the devastated country. 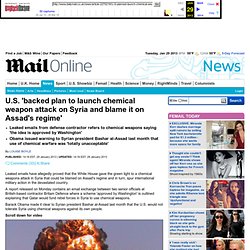 A report released on Monday contains an email exchange between two senior officials at British-based contractor Britam Defence where a scheme 'approved by Washington' is outlined explaining that Qatar would fund rebel forces in Syria to use chemical weapons. Barack Obama made it clear to Syrian president Bashar al-Assad last month that the U.S. would not tolerate Syria using chemical weapons against its own people. Scroll down for video. History Lessons the West Refuses to Learn. In the aftermath of the First World War, Britain and France famously created the modern Middle East by carving up what had been the Ottoman Empire. 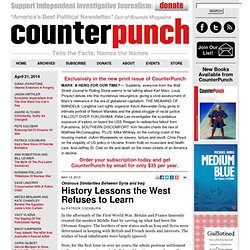 The borders of new states such as Iraq and Syria were determined in keeping with British and French needs and interests. The wishes of local inhabitants were largely ignored. Now, for the first time in over 90 years, the whole postwar settlement in the region is coming unstuck. External frontiers are no longer the impassable barriers they were until recently, while internal dividing lines are becoming as complicated to cross as international frontiers. In Syria, the government no longer controls many crossing points into Turkey and Iraq. Jon Stewart Takes Apart GOP Warmongers on Syria. Lest we forget, an attack on Syria is an attack on Iran and a threat to the Shanghai Cooperation Organization. Via chycho United States involvement in Syria has nothing to do with a repressive regime.

After all, in 2002 the United States willingly used Assad’s regime to torture Maher Arar, a Canadian citizen, when they renditioned him to Syria from New York. The world was also quite grateful to Syria for accepting 1.5 million refugees created by the US invasion of Iraq, especially considering that for approximately the same period the United States had only accepted 7,000 Iraqi refugees. What’s happening in Syria is part of a bigger picture, a grand chessboard if you’d like, and what’s happening there is definitely not the end game. In 2006 Syria signed a defense agreement with Iran. CIA Providing Intelligence To Syrian Rebels, Wall Street Journal Says. The US Central Intelligence Agency has been feeding information to select rebel fighters in Syria to try to make them more effective against government troops, The Wall Street Journal reported Saturday.