So now we know: Russia is as powerless in Syria as the West  WHO ARE SYRIA’S WHITE HELMETS? Exclusive: U.N. says Syria combatants stymie aid effort. Insight: After Assad, Syria democrats learn to fear Qaeda. Syria: Nerve gas attack near Damascus kills 1,300 including women and children. Activists claim 1,300 killed in government rocket strike on residential areaIf true, it would represent the worst known use of chemical weapons since Saddam Hussein gassed thousands of Kurds in the town of Halabja in 1988Chemical warheads hit suburbs of Ain Tarma, Zamalka and JobarThey hit just before dawn as families lay sleepingA UN team is in Syria to probe chemical weapons use by President Assad Many countries have called for an immediate investigationFrench Foreign Minister has called the attack an 'unprecedented atrocity' William Hague said hopes attack will 'wake up some' who support AssadClaims come as refugees flood into Iraqi Kurdistan. 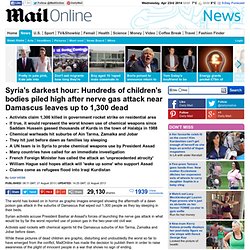 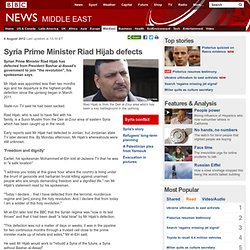 Mr Hijab was appointed less than two months ago and his departure is the highest-profile defection since the uprising began in March 2011. State-run TV said he had been sacked. Riad Hijab, who is said to have fled with his family, is a Sunni Muslim from the Deir al-Zour area of eastern Syria which has been caught up in the revolt. Early reports said Mr Hijab had defected to Jordan, but Jordanian state TV later denied this. Syria has begun moving its chemical weapons stockpile out of storage, U.S. warns. Syria has undeclared arsenals of sarin nerve agent, mustard gas, cyanideU.S. officials fear Assad may want to use weapons against rebels or civiliansOthers believe he is trying to safeguard stockpile from his opponents By Graham Smith Published: 14:58 GMT, 13 July 2012 | Updated: 16:37 GMT, 13 July 2012 Syria has started to move part of its chemical weapons arsenal out of storage facilities, according to U.S. officials. 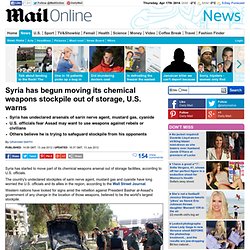 The country's undeclared stockpiles of sarin nerve agent, mustard gas and cyanide have long worried the U.S. officials and its allies in the region, according to the Wall Street Journal. Syria massacre: More than 250 dead as 'every family has had members killed' The massacre in Tremseh would be the worst yet since the rebellion against President Bashar al-Assad began 17 months agoCivilians were allegedly killed 'execution-style' with shots to the head while others were shelled by tanks and helicopter gunshipsWitnesses say bodies were scattered in surrounding fields, rivers and houses By Mark Duell Published: 04:42 GMT, 13 July 2012 | Updated: 01:42 GMT, 14 July 2012 Militia loyal to Syrian president Bashar al-Assad were accused of the massacre of more than 200 civilians yesterday after helicopter gunships and tanks attacked a village. 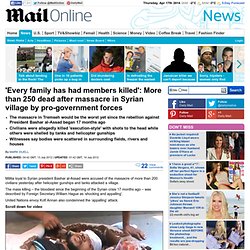 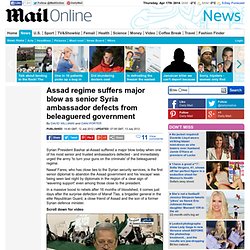 Syria suffers more mass defections as top army officers and their families arrive in Turkey. By Daily Mail Reporter Published: 08:52 GMT, 25 June 2012 | Updated: 23:49 GMT, 25 June 2012 Tensions increased between Turkey and Syria last night as Ankara called for Nato to class the shooting down of one of its fighter jets as an attack on the whole military alliance. 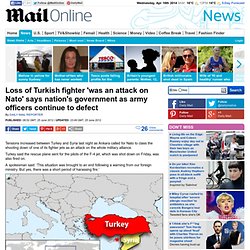 Turkey said the rescue plane sent for the pilots of the F-4 jet, which was shot down on Friday, was also fired on. A spokesman said: ‘This situation was brought to an end following a warning from our foreign ministry. But yes, there was a short period of harassing fire.’ The Idiot's Guide to Fighting Dictatorship in Syria While Opposing Military Intervention. [Writing this in Beirut is apt, where there is a deep polarization between those who would die for the Syrian regime and those who just want it to die, at any cost. 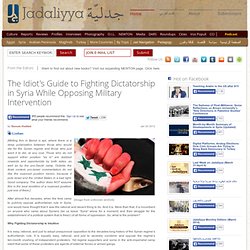 Those who do not support either position "as is" are dubbed cowards and opportunists by both sides, as well as by the pro-Saudi camp. Outside the Arab context, pro-Israel commentators do not like the nuanced position herein, because it puts Israel and the United States in a bad light. Good company. The author does NOT assume this is the best rendition of a nuanced position: just one of them.] After almost five decades, when the time came to publicly oppose authoritarian rule in Syria, one would have thought that it was the rational and decent thing to do. Why Fighting Dictatorship Is Intuitive It is easy, rational, and just to adopt unequivocal opposition to the decades-long history of the Syrian regime’s authoritarian rule. While there may be a grain of truth in this argument, it is empty. Bear with me for a moment here. Why Putin backs this vile tyrant in Syria. By Ian BirrellUPDATED: 22:49 GMT, 6 February 2012 Bloodshed: President Bashar al-Assad will stop at nothing to retain power for his corrupt and blood-stained regime With each day, the Syrian tragedy grows deeper. 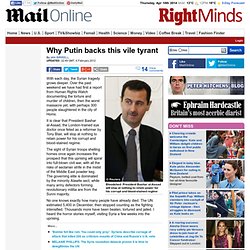 Over the past weekend we have had first a report from Human Rights Watch documenting the torture and murder of children, then the worst massacre yet, with perhaps 300 people slaughtered in the city of Homs. It is clear that President Bashar al-Assad, the London-trained eye doctor once feted as a reformer by Tony Blair, will stop at nothing to retain power for his corrupt and blood-stained regime. Syria bloodshed: Russia wants to give war a chance. By Alexander BootUPDATED: 13:32 GMT, 6 February 2012 Russia's veto of the UN resolution on Syria is much in the news, with most commentators (of whom Ian Birrell is perhaps the most incisive) highlighting the nature of the relationship between the two countries as the explanation for this apparently subversive action. 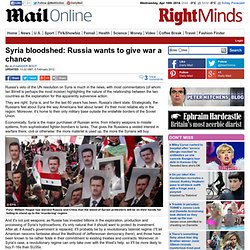 They are right: Syria is, and for the last 60 years has been, Russia's client state. Strategically, the Russians feel about Syria the way Americans feel about Israel: it's their most reliable ally in the region. Moreover, it's home to their only military base outside the erstwhile borders of the Soviet Union. Economically, Syria is the major purchaser of Russian arms, from infantry weapons to missile systems, from sophisticated fighter-bombers to tanks. Arab Spring? This is turning into the winter of Islamic jihad. By John BradleyUPDATED: 23:53 GMT, 22 November 2011 The Arab Spring is rapidly turning into a winter of chaos and oppression. 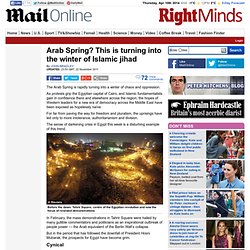 As protests grip the Egyptian capital of Cairo, and Islamic fundamentalists gain in confidence there and elsewhere across the region, the hopes of Western leaders for a new era of democracy across the Middle East have been exposed as hopelessly naïve. For far from paving the way for freedom and pluralism, the uprisings have led only to more intolerance, authoritarianism and division.