Russia’s relentless and vicious campaign in NW Syria, where millions of civilians and IDPs live and could be forced to flee en mass, continues. The leader of the force that dominates that area has a new speech. A new &amp; dangerous chapter is looming. De. The White Helmets: Fighting for life in Syria's vicious civil war. A great city that once held more than two million people is on the edge of surrender after five years of siege and starvation. 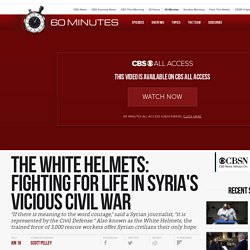 Aleppo was the center of the rebellion against the Syrian dictatorship of Bashar al-Assad. When our story first aired in December, Assad and his Russian ally, intensified their air strikes against Aleppo's dense neighborhoods. For civilians, under this bombardment, the greatest fear is to be buried alive -- to suffocate or bleed to death in the rubble of their own home. Their only hope is the Syrian Civil Defense, a self-appointed, all Syrian, volunteer force of rescue workers who call themselves the White Helmets. To support the White Helmets, visit their website The airstrikes, day and night, obliterate apartments and shatter the nerves. 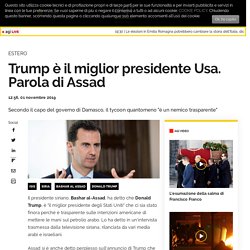 Syria accidentally shot down a Russian military plane. Battle for Syria's last major rebel bastion on hold as Putin and Erdogan meet to discuss next moves. The leaders of Turkey and Russia are meeting in Sochi on Monday for hastily arranged talks over the fate of Syria’s last major rebel stronghold. 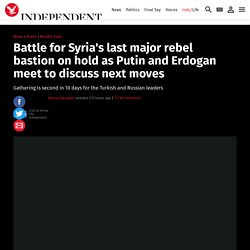 For now the impending offensive on Idlib province, touted for weeks by Damascus and its Russian and Iranian backers, appears to be on hold as a result of Turkish diplomatic agitation and military manoeuvres. Turkey is struggling to prevent an onslaught by pro-Damascus forces on the rebel-held Idlib province, but its moves may have also escalated the potential dangers of the conflict. Turkey, Russia, Iran have reached an "agreement in principle. Diplomats from Iran, Russia, Turkey meet UN envoy on Syria. GENEVA (AP) — The U.N. envoy for Syria hosted key diplomats from Iran, Russia and Turkey on Tuesday to discuss work toward rewriting the country’s constitution, amid concerns about a possibly devastating military offensive on rebel-held Idlib province. 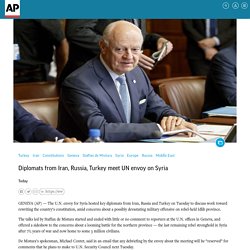 The talks led by Staffan de Mistura started and ended with little or no comment to reporters at the U.N. offices in Geneva, and offered a sideshow to the concerns about a looming battle for the northern province — the last remaining rebel stronghold in Syria after 7½ years of war and now home to some 3 million civilians. De Mistura’s spokesman, Michael Contet, said in an email that any debriefing by the envoy about the meeting will be “reserved” for comments that he plans to make to U.N. Security Council next Tuesday. The ministry said the Turkish, Russian and Iranian officials would hold more talks on the issue at a “technical level.” Syria war: Why does the battle for Idlib matter? Image copyright AFP The war in Syria could be about to enter its final stage, as Syria and its ally Russia gear up for an all-out assault on the rebel-held province of Idlib. 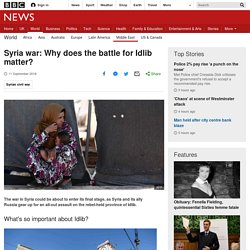 What's so important about Idlib? The province is the last major stronghold of the rebel and jihadist groups which have been trying to overthrow Mr Assad for the past seven years. The UN says Idlib is home to some 2.9 million people, including 1 million children. Syria war: Russia rejects Turkey's calls for Idlib truce. Media playback is unsupported on your device Russian President Vladimir Putin has rejected Turkey's calls for a truce to prevent a "bloodbath" in north Syria. 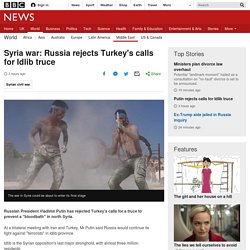 At a trilateral meeting with Iran and Turkey, Mr Putin said Russia would continue its fight against "terrorists" in Idlib province. Idlib is the Syrian opposition's last major stronghold, with almost three million residents. Syrian military forces, backed by Russia and Iran, are poised to launch a major offensive there soon. Syria summit in Iran may decide Idlib military offensive. TEHRAN, Iran (AP) — The presidents of Iran, Russia and Turkey will meet Friday in Tehran to discuss the war in Syria, with all eyes on a possible military offensive to retake the last rebel-held bastion of Idlib. 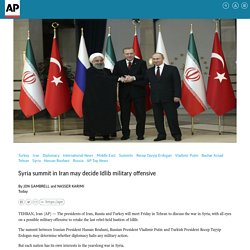 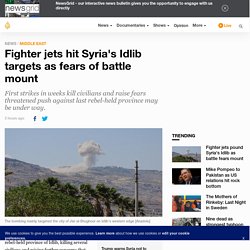 The strikes on Tuesday came as the United Nations urged Russia, a Syrian government ally, and Turkey, which backs certain rebel groups in Idlib, to help avert a "bloodbath". A full-scale military offensive would be devastating for the nearly three million people living in the province, including many rebels and civilians who were bussed out of other areas as they came back under government control. At least 24 raids - the first in three weeks - hit the area on Tuesday morning, Al Jazeera's Stefanie Dekker reported from Antakya, in neighbouring Turkey, citing activists who said "they saw Russian and Syrian regime warplanes in the sky".

The Syrian volunteer rescue workers known as the White Helmets have become the target of an extraordinary disinformation campaign that positions them as an al-Qaida-linked terrorist organisation. 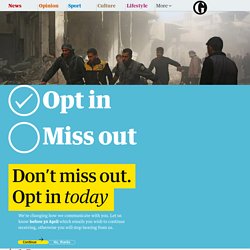 The Guardian has uncovered how this counter-narrative is propagated online by a network of anti-imperialist activists, conspiracy theorists and trolls with the support of the Russian government (which provides military support to the Syrian regime). The White Helmets, officially known as the Syria Civil Defence, is a humanitarian organisation made up of 3,400 volunteers – former teachers, engineers, tailors and firefighters – who rush to pull people from the rubble when bombs rain down on Syrian civilians. Assad’s rape victims break their silence. UNRWA deeply concerned about the escalation of fighting and fate of thousands of Palestine refugees in Yarmouk camp and surrounding areas. Profile: Who is Bashar al-Assad? Syrian President Bashar al-Assad inherited power in July 2000, a month after his father, military strongman Hafez al-Assad died. 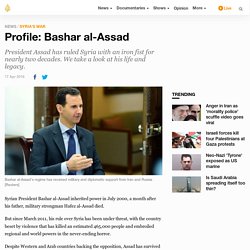 But since March 2011, his rule over Syria has been under threat, with the country beset by violence that has killed an estimated 465,000 people and embroiled regional and world powers in the never-ending horror. Despite Western and Arab countries backing the opposition, Assad has survived seven years of war and refuses to step aside. La «resistenza» dei cristiani nella Siria che non trova pace. L’anti-imperialismo degli idioti. Guido Olimpio - Un punto su forze straniere in Siria.... Before and after: satellite pictures of airstrikes in Syria. The governments of the US, UK and France say 105 missiles were launched at three sites in Syria as part of a coordinated operation early on the morning of 14 April, at around 4am local time. The air and sea strikes were a response to an alleged chemical attack in Douma a week before, which killed at least 42 people and injured hundreds.

Him Shinshar chemical weapons storage site The chairman of the US joint chiefs of staff, Gen Joseph Dunford, said Him Shinshar was “the primary location of Syrian sarin and precursor production equipment”. A total of 22 missiles from France, the United Kingdom and the United States hit this site, including eight British Storm Shadow missiles and nine American Tomahawk missiles. The MoD said the facility was a former missile base, located around 15 miles west of Homs, where the Syrian regime was believed to keep a stockpile of chemical weapon precursors, which can be used to make blister agents such as mustard gas or nerve agents such as sarin. Rights researchers say thousands forcibly disappeared in Syrian prisons - Egypt Independent. Paris–Coinciding with the tenth anniversary of the death of former Syrian president Hafez al-Assad’s and the nomination of his son Bashar for presidency, a number of Syrian human rights researchers backed by Freedom House have released a report on the situation of citizens forcibly disappeared within the country’s prisons.

The report concentrates on forced disappearances over the last three decades (1979-2009) primarily as a human rights issue, but also as an issue that relates to democratic change. The authors of the report believe the situation of the prisoners must be raised internationally. They also say dealing with the issue will help Syria along the path to democracy and demonstrate openness on the part of the regime. However, according to the report, democratic transition cannot happen unless a set of conditions are met. FULL TEXT: French declassified intelligence report claiming Assad behind Syria gas attacks - Syria. France concluded after technical analysis of open sources and "reliable intelligence" that a chemical attack on Douma on April 7 was carried out by Syrian government forces, a declassified intelligence report showed on Saturday.

Here is the full declassified national assessment provided by the French foreign ministry in English: I. SEVERAL LETHAL CHEMICAL ATTACKS TOOK PLACE IN THE TOWN OF DOUMA IN THE LATE AFTERNOON OF SATURDAY,7 APRIL 2018, AND WE ASSESS WITH A HIGH DEGREE OF CONFIDENCE THAT THEY WERE CARRIED OUT BY THE SYRIAN REGIME. >> U.S., France and U.K. strike Syria over chemical attack ■ There's only one show in town right now: A battle between two superpowers>> Following the Syrian regime’s resumption of its military offensive, as well as high levels of air force activity over the town of Douma in Eastern Ghouta, two new cases of toxic agents employment were spontaneously reported by civil society and local and international media from the late afternoon of 7 April.

No, US strikes on Syria will not start World War III. Once upon a time, when Barack Obama was US president and after the Assad regime gassed over 1,000 civilians to death in August 2013, Donald Trump tweeted, "Why do we keep broadcasting when we are going to attack Syria [sic]. Why can't we just be quiet and, if we attack at all, catch them by surprise? " Yet, when faced with a similar chemical weapons attack perpetrated by the regime and its allies this month, Trump took to Twitter once again, doing exactly what he warned against, this time tweeting, "Russia vows to shoot down any and all missiles fired at Syria. Get ready Russia, because they will be coming, nice and new and 'smart! ' You shouldn't be partners with a Gas Killing Animal [sic] who kills his people and enjoys it! " So, just for the record, according to President Trump, foreign policy under Obama should have been masked in secrecy. Not unexpectedly, various commentators in the West again jumped at the opportunity to declare the start of World War III on social media.

Guido Olimpio - Valutazione iniziale. Trump ha parlato... Statement by Secretary James N. Mattis on Syria > U.S. DEPARTMENT OF DEFENSE > News Release View. Good evening. As the world knows, the Syrian people have suffered terribly under the prolonged brutality of the Assad regime. On April 7th, the regime decided to again defy the norms of civilized people, showing callous disregard for international law by using chemical weapons to murder women, children and other innocents. We and our allies find these atrocities inexcusable. As our commander in chief, the president has the authority under Article II of the Constitution to use military force overseas to defend important U.S. national interests. Top brass: Missiles of US, allies steered clear of Russian air defenses. Un ragionamento freddo su Assad. Assad takes control of town hit by chemical attack; Russian military police deployed - Syria. Syrian government forces have taken full control over the town of Douma, the last rebel stronghold in the eastern Ghouta enclave outside Damascus, Russian news agencies reported on Thursday, citing a Russian military official.

"The raised state flag over a building in the town of Douma has heralded the control over this location and therefore over the whole of eastern Ghouta," Major-General Yuri Yevtushenko, head of the Russian peace and reconciliation center in Syria, was quoted as saying. >> The Preventable War Crime: How the West Failed to Prevent One Syrian Chemical Attack After Another | Analysis << Russian military police have been deployed in the Syrian town of Douma as of Thursday, RIA news agency reported, citing Russia's defence ministry.