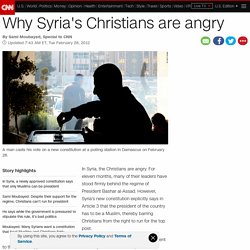 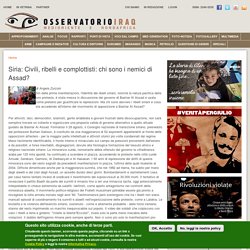 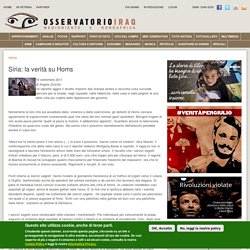 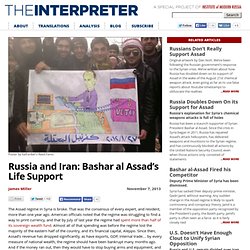 That was the consensus of every expert, and resident, more than one year ago. Afghanistan, Iraq, Libya, and now Syria: Cheer-leading Another Blood Bath in the Name of Peace. “Any time bombs are used to target innocent civilians it is an act of terrorism.” 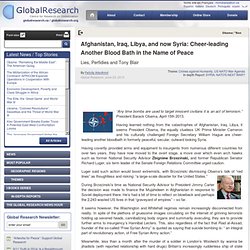 President Barack Obama, April 15th 2013. Having learned nothing from the catastrophes of Afghanistan, Iraq, Libya, it seems President Obama, the equally clueless UK Prime Minister Cameron and his culturally challenged Foreign Secretary William Hague are cheer-leading another bloodbath in formerly peaceful, secular, outward looking Syria. Having covertly provided arms and equipment to insurgents from numerous different countries for over two years, they have now moved to the overt stage, a move over which even arch hawks such as former National Security Advisor Zbigniew Brzezinski, and former Republican Senator Richard Luger, six term leader of the Senate Foreign Relations Committee urged caution. Most Syrians voted for new constitution: Minister. Syrian President Bashar al-Assad and his wife, Asma, cast their ballot in the capital, February 26, 2012. Almost 90 percent of Syrian voters have said 'yes' to the country’s new constitution, says Interior Minister Mohammad Ibrahim al-Shaar. 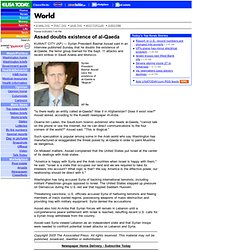 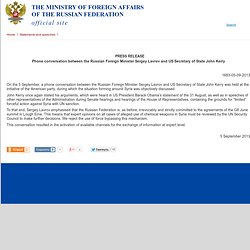 John Kerry once again stated his arguments, which were heard in US President Barack Obama’s statement of the 31 August, as well as in speeches of other representatives of the Administration during Senate hearings and hearings of the House of Representatives, containing the grounds for “limited” forceful action against Syria with UN sanction. To that end, Sergey Lavrov emphasised that the Russian Federation is, as before, irrevocably and strictly committed to the agreements of the G8 June summit in Lough Erne. Complications abound for Syrian chemical disarmament. Both politically and logistically, getting rid of Syria’s chemical weapons would be a long and difficult process. 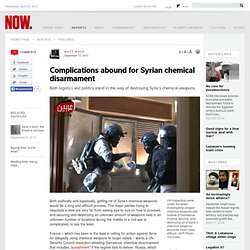 The major parties trying to negotiate a deal are very far from seeing eye-to-eye on how to proceed, and securing and destroying an unknown amount of weapons held in an unknown number of locations during the middle of a civil war is complicated, to say the least. France – which has been in the lead in calling for action against Syria for allegedly using chemical weapons to target rebels – wants a UN Security Council resolution detailing Damascus’ chemical disarmament that includes “punishment” if the regime fails to deliver. Russia, which floated the weapons handover idea, wants neither a full UNSC resolution nor any threat of force if Syrian President Bashar al-Assad flouts any future deal. Sources: Syrian rebels plan chem attack on Israel from Assad-controlled territories. Look With Your Own Eyes: The Videos of the Chemical Attacks in Syria Show Tampered Scenes.

The videos presented by the US Intelligence Community as evidence have staged scenes. 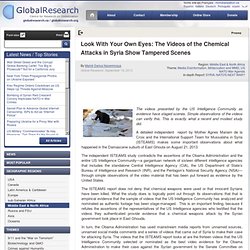 Simple observations of the videos can verify this. This is exactly what a recent and modest study did. A detailed independent report by Mother Agnes Mariam de la Croix and the International Support Team for Mussalaha in Syria (ISTEAMS) makes some important observations about what happened in the Damascene suburb of East Ghouta on August 21, 2013. The independent ISTEAMS study contradicts the assertions of the Obama Administration and the entire US Intelligence Community—a gargantuan network of sixteen different intelligence agencies that includes the standalone Central Intelligence Agency (CIA), the US Department of State’s Bureau of Intelligence and Research (INR), and the Pentagon’s National Security Agency (NSA)—through simple observations of the video material that has been put forward as evidence by the United States. 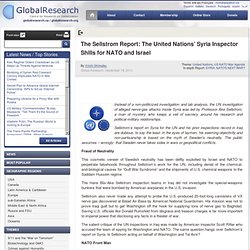 Sellstrom’s report on Syria for the UN and his prior inspections record in Iraq are dubious, to say the least. U.N. report on sarin attack in Syria points to Assad, envoys say. A United Nations report concluding that chemical weapons were used in Syria on Aug. 21 contains evidence pointing to Syrian President Bashar Assad's forces as the perpetrators, the U.S. and British ambassadors to the world body said Monday. U.N. Secretary-General Ban Ki-moon declined to say whether rocket fragments and other physical evidence collected from a Damascus suburban area by U.N. investigators made it clear whether it was the Assad regime or the rebels fighting him who launched the sarin gas attacks.

But U.S. Ambassador Samantha Power and British U.N. envoy Mark Lyall Grant stated unequivocally that the inspectors' findings confirmed their conclusions that it was Assad who was behind the worst chemical weapons attack in 25 years. DOCUMENT: U.N. report on chemical weapons use in Syria. The Full Story on Why Obama Backed Down on Syria. EN DIRECT. Syrie: Revivez toute la journée du 6 septembre. Will Congress Authorize A Strike On Syria? Posted: 09/04/2013 9:00 am EDT Last update: Friday, Sept. 13, 2013, 10:44 am EDT. Wall Street Journal Op-Ed Draws Scrutiny Over Writer's Ties To Syrian Rebel Advocacy Group.

Russian chemical weapons compromise: What's in it for Assad? But Assad may have more to gain than Russian goodwill by embracing the chemical-weapons compromise. Putin again warns Netanyahu hands off Syria. Israeli Prime Minister Binyamin Netanyahu spent three hours with Russian President Vladimir Putin at his residence in the Black Sea resort of Sochi, Tuesday, May, 14. He came for a last-ditch attempt to head off the supply of advanced Russian anti-air S-300 missile systems to Syria. Instead, the Russian leader turned the conversation around to focus implicitly on Israel’s air strikes against Damascus on May 3 and May 5. Syria Chemical Weapons: Who was behind the East Ghouta Attacks? By Yuram Abdullah Weiler “He who permits himself to tell a lie often finds it much easier to do it a second and a third time, till at length it becomes habitual; he tells lies without attending to it, and truths without the world’s believing him.” – Thomas Jefferson, 1785 By design, the final report of the United Nations Mission to investigate allegations of the use of chemical weapons in the Syrian Arab Republic did not address the question of who was responsible for the August 21, 2013 gas attack in the suburbs of Damascus.