Here Is The YouTube "Start A False Flag War With Syria" Leaked Recording That Erdogan Wanted Banned. Who Was Behind the Syrian Sarin ‘False Flag’ Attack? by Justin Raimondo. It’s in somewhat dubious taste to start off a column by saying "I told you so," but in this case that’s the shortest and indeed only way to convey my reaction to Seymour Hersh’s piece in the London Review of Books revealing that the chemical attack which nearly triggered a full-scale US military operation against the Assad regime was a false flag incident engineered by the Turks. 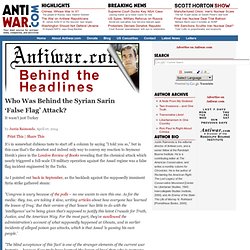 As I pointed out back in September, as the backlash against the supposedly imminent Syria strike gathered steam: "Congress is wary because of the polls – no one wants to own this one. As for the media: they, too, are taking it slow, writing articles about how everyone has ‘learned the lesson of Iraq.’ But their version of that ‘lesson’ has little to do with the ‘intelligence’ we’re being given that’s supposed to justify this latest Crusade for Truth, Justice, and the American Way. Leaked Audio Recording: Turkey Plans False Flag Attacks to Create Pretext for “Humanitarian” War on Syria. In a devastating exposure of the criminality of the US-led proxy war in Syria, Turkish officials have been caught planning an attack on their own forces to manufacture a pretext to attack Syria. 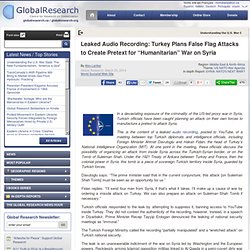 This is the content of a leaked audio recording, posted to YouTube, of a meeting between top Turkish diplomats and intelligence officials, including Foreign Minister Ahmet Davutoglu and Hakan Fidan, the head of Turkey’s National Intelligence Organization (MIT). At one point in the meeting, these officials discuss the possibility of organizing an attack from inside Syria across the Turkish-Syrian border, or on the Tomb of Suleiman Shah. Under the 1921 Treaty of Ankara between Turkey and France, then the colonial power in Syria, this tomb is a piece of sovereign Turkish territory inside Syria, guarded by Turkish forces. Leaked Audio Recording: Turkey Plans False Flag Attacks to Create Pretext for “Humanitarian” War on Syria.

Turkey’s False Flag Plan: What you’re not being told. Podcast: Play in new window | Download by James CorbettBoilingFrogsPost.com April 1, 2014 Late last week, a conversation between high-ranking Turkish officials was leaked online purporting to expose a plan that had been devised to use a staged attack on a Turkish target in Aleppo as a pretext to start a war with Syria. 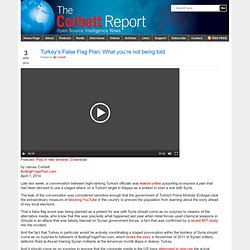 Turkey shuts off YouTube after 'Syria invasion plan' leak. Did Powerful Elements in Turkey Plan a False Flag Attack to Drag the Country into War with Syria? April 1, 2014 | Like this article? 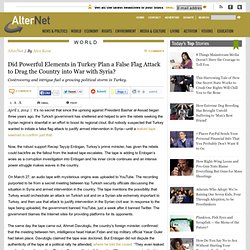 Join our email list: Stay up to date with the latest headlines via email. It’s no secret that since the uprising against President Bashar al-Assad began three years ago, the Turkish government has sheltered and helped to arm the rebels seeking the Syrian regime’s downfall in an effort to boost its regional clout. But nobody suspected that Turkey wanted to initiate a false flag attack to justify armed intervention in Syria—until a leaked tape seemed to confirm just that.

Now, the robust support Recep Tayyip Erdogan, Turkey’s prime minister, has given the rebels could backfire as the fallout from the leaked tape escalates. On March 27, an audio tape with mysterious origins was uploaded to YouTube. The same day the tape came out, Ahmet Davutoglu, the country’s foreign minister, confirmed that the meeting between him, intelligence head Hakan Fidan and top military official Yasar Guler had taken place. Turkey Blocks YouTube After Leak of Syria Incursion Planning. Tomb of Suleyman Shah. Syria Crisis and the Tomb[edit] On 5 August 2013, the Syrian civil war prompted Turkish Prime Minister Recep Tayyip Erdogan to state that, "The tomb of Suleyman Shah [in Syria] and the land surrounding it is our territory. 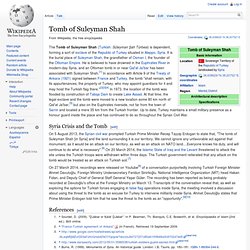 We cannot ignore any unfavorable act against that monument, as it would be an attack on our territory, as well as an attack on NATO land....Everyone knows his duty, and will continue to do what is necessary".[6] On 20 March 2014, the Islamic State of Iraq and the Levant threatened to attack the site unless the Turkish troops were withdrawn within three days. The Turkish government reiterated that any attack on the tomb would be treated as an attack on Turkish soil.[7] On 27 March 2014, recordings were released on Youtube[8] of a conversation purportedly involving Turkish Foreign Minister Ahmet Davutoğlu, Foreign Ministry Undersecretary Feridun Sinirlioğlu, National Intelligence Organization (MİT) head Hakan Fidan, and Deputy Chief of General Staff General Yaşar Güler.

Turky & The Syrian War (2014) DN! Sy Hersh Reveals Potential Turkish Role in Syria Chemical Strike That Almost Sparked U.S. Bombing. AMY GOODMAN: As Syria continues to remove its chemical weapons arsenal under the monitoring of the United Nations, a new article by the Pulitzer Prize-winning journalist Seymour Hersh questions what happened last year in the Syrian city of Ghouta, when hundreds of Syrians died in a chemical weapons attack. 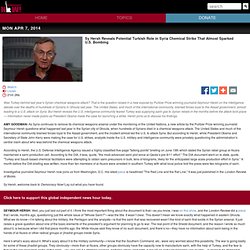 The United States and much of the international community blamed forces loyal to the Assad government, and the incident almost led the U.S. to attack Syria. But according to Hersh, while President Obama and Secretary of State John Kerry were making the case for U.S. strikes, analysts inside the U.S. military and intelligence community were privately questioning the administration’s central claim about who was behind the chemical weapons attack. According to Hersh, the U.S. Defense Intelligence Agency issued a highly classified five-page "talking points" briefing on June 19th which stated the Syrian rebel group al-Nusra maintained a sarin production cell.