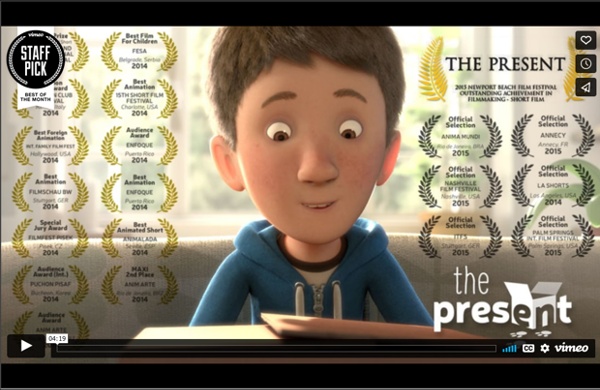 Lost Property by Åsa Lucander Ever since I saw the opening sequence of Pixar’s Up (you know the part I’m talking about), it seems like I’ve noticed a shift in animation—less hijinks, more sentimentality. The cynic in me wants to reject this trend—it feels like so many animators (especially those hoping to work for Disney’s animated behemoth) are crafting shorts that are aren’t just aiming for your heartstrings, but are figuratively trying to rip them out of your chest. It can all come across as a bit manipulative—feeling sad for the sake of feeling sad. But, occasionally, a short comes my way that manages to warm my cold, black heart.

The ‘Active Shooter’ Is Never Far Away Photo Thirty-two hours after Omar Mateen began murdering people with a Sig Sauer MCX rifle at Pulse nightclub in Orlando, Fla. — the deadliest mass shooting in modern American history — an entrepreneur named Jeffrey Isquith arrived at the Merchandise Mart in Chicago, a cavernous Art Deco building overlooking the Chicago River, for the NeoCon trade show, which bills itself as “North America’s most important design exposition and conference for commercial interiors.” The show would bring the official debut of a product that his company, Ballistic Furniture Systems, had been developing for five years: bullet-­resistant panels that could be fitted inside chairs, cubicles and doors. That morning, several manufacturers of commercial furniture — the kind you find in hospital waiting rooms, offices and hotel lobbies — were rolling out models using the new technology.

Our Everloving Quest to Control Our Lives By Leo Babauta Almost our entire lives are spent in a quest to gain control, security and comfort in our lives. Unfortunately, we never really get it, so we keep trying, relentlessly. Movie Talk: Un hombre triste se pone feliz – My generation of polyglots Movie talk on the fly Recently a teacher asked me to describe how I do movie talk with my classes. I believe that Movie talk is most effective when planned out so that target structures are recycled, but thinking about Krashen’s argument for non-targeted CI has led me to feel better about all of the Movie talks that I do on the fly. Lawnmower Parents Are the New Helicopter Parents This post was contributed by a WeAreTeachers community member who wishes to remain anonymous. Recently, I was called down to the main office in the middle of my planning period. I needed to pick up an item that a parent dropped off for their child. Thinking it was something like an inhaler or money for dinner, I was happy to go retrieve it. When I got to the front office, the parent was holding out a S’well bottle for me.

The Seven Best Short Films for ELT Students - Kieran Donaghy I’ve been writing lesson plans designed around short films for my website Film English for six years. Teachers often ask me how I find the short films I use in my lesson plans. The answer is quite simple: I’ve watched literally thousands of short films and developed an instinct for the type of engaging and simple short films which will work in the ELT classroom. In this article I’d like to share what for me are the seven best short films for the language classroom. The psychology of narcissism - W. Keith Campbell Interested in learning more on narcissism? Here are the abstracts for two good papers: Narcissism at the crossroads: Phenotypic description of pathological narcissism across clinical theory, social/personality psychology, and psychiatric diagnosis and Grandiose and vulnerable narcissism: A nomological network analysis. These papers describing vulnerable and grandiose narcissism can be found on Google scholar or at your local university library. The clinical description of narcissistic personality can be found in the . But, for a quick overview, there are web resources like those found at the Mayo Clinic website or at this Medscape link. There are also some wonderful books on the topic of narcissism.

Sometimes it takes the words of others to soothe our own soul. If you’re feeling anxious or have an anxious child, write a few of these down or print them out and keep them handy. 1. “The greatest weapon against stress is our ability to choose one thought over another.” ~William James 2. Simon’s Cat–Santa Claws MovieTalk – Williamson CI & TPRS Here are resources for doing a MovieTalk with the Simon’s Cat video called “Sa nta Claws.” A good one to do with Christmas coming soon! Tim Dowling: my youngest doesn’t look old enough to work in a pub Shortly after we moved house and a few weeks after he turned 18, my youngest son took himself down the road to the pub by the train station and applied for the job advertised on the sandwich board outside. He didn’t look old enough to be in a pub, much less work in one, but they hired him anyway; he remains their youngest employee by some margin. I went in there once, just to see him standing behind the bar. It was both impressive and a little disturbing, like watching a monkey smoke a pipe. A year later, on his 19th birthday, I am trying to find a present for him at a French airport. Celebrations are being delayed until my arrival home, unless a local air traffic controllers’ strike foils my plans.