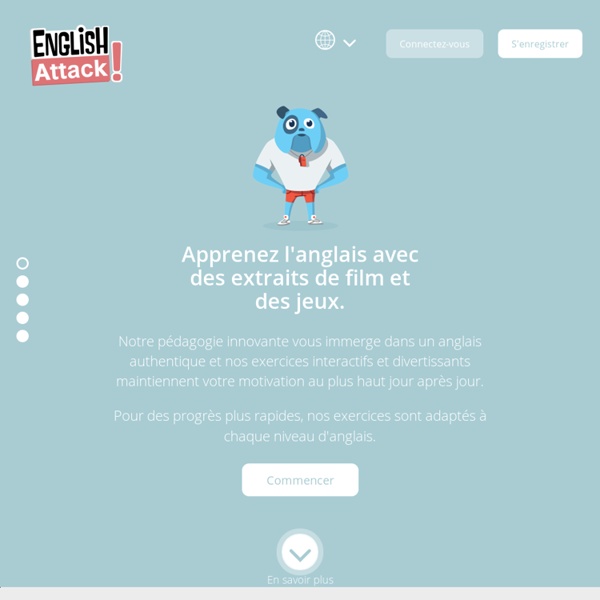 Lifetime videos to learn English An appealing sitcom comedy, combined with a clear language focus to practice daily conversations. Lifetime is a three-level video comedy-drama for elementary, pre-intermediate, and intermediate students. Each level consists of seven episodes with a language focus, and an emphasis on communication. Your Secret This EFL lesson is based around a short film called Your Secret. What I like most about the film is that it involves the viewers and encourages them to take an active and creative part. I would ask all teachers who use Film English to consider buying my book Film in Action as the royalties which I receive from sales help to keep the website completely free. Language level: Pre-intermediate (A2) – Intermediate (B1) Learner type:Teens and adults Time: 60 minutes

Are you a Good Language Learner? In this post-method era, when so many approaches and methods to language teaching have come and gone, where reflective teachers are no longer thinking in terms of which ‘label’ to follow or which apostle to bow to, it has become more and more evident that TEFL needs to stop contemplating its own navel and turn to general education theories and principles of learning, to reflect on thinking skills, cognitive abilities and the learners’ emotional make up, to embrace technology as a tool and not as the panacea for all ills. In this context, good learner studies conducted in the late 70’s and 80’s have become much more relevant and worth revisiting. Many of the studies were conducted in Canada, with notable names and studies listed below in a sample bibliography. photo taken by Marisa Constantinides at CELT Athens Good Language Learners …

Icebreakers for Teens One of the first steps in forming a group is having the participants find commonality, and you can do this with icebreaker games. Teenagers often find icebreakers a fun way to introduce themselves, especially if they are self-conscious about speaking in front of a group. Top Ten Icebreakers for Teens You can use the following icebreakers for teens as written, or you can alter them to fit the number of participants you have or the theme of the group. #1 Human Bingo Take a pile of note cards, and write a teen's name and a question on it. Cambridge English exams - Information and practice tests for IELTS, First (FCE), Advanced (CAE), Preliminary (PET) and other Cambridge exams Cambridge English (also known as ESOL) is a department of Cambridge University. Their English exams Proficiency (CPE), Advanced (CAE), First (FCE), Preliminary (PET) and Key (KET) are recognised around the world by thousands of employers, universities and government ministries as proof of ability to use English. Cambridge developed the IELTS exam in conjunction with the British Council and IELTS Australia. Cambridge ESOL have a range of business English examinations including BULATS and BEC. Cambridge ESOL also helped to develop the Common European Framework of Reference for Languages (CEFR) — an internationally recognised level of language ability.

School Start 7-9 ⋆ WebEnglish.se Check also New Teacher Introductions in Teach by Calendar August 19th Warm-up Welcome to a New School Year (4:27) Video clip with powerful messages to live up toBack to School Expectations Vs. Reality! (4:54) A funny vlog by a high-schooler to show what to expect of the school yearEMINEM GOES BACK TO HIGH SCHOOL (6:06) Eminem tells about his years at schoolKid President’s Pep Talk (3:54) Motivational video for students and teachers alike 52 Get to Know You Questions! This past week there was a group of people coming over and I was in charge of the "get to know you" game. I remembered that I had see something like this on Pinterest, where you write all over a ball and then you toss the ball around and whatever question your thumb lands on you have to answer. I got a ball and filled it with "get to know you" questions. I started out writing kind of smaller than I probably should have, so I ended up having to write a TON of questions. Luckily my mom was able to help me come up with some of them. I thought I would share the list.

My English Blog Incredible sites to improve your fluency using these common expressions. Do and Make Collocations Expressions with make: Basic Difference between DO and MAKE Use DO for actions, obligations, and repetitive tasks.Use MAKE for creating or producing something, and for actions you choose to do.DO generally refers to the action itself, and MAKE usually refers to the result. For example, if you “make breakfast,” the result is an omelet! Using Silent Video in the EFL Classroom This video is the BOMB! It is captivating, absorbing, a story par excellence but also SILENT! Yes, silent films are great for getting students to produce language — and after all is said and done, that most often is the hardest thing to do, getting the students speaking and learning language by just communicating. That is our job, to get the students so absorbed in the communicative act that they forget they are learning. When we forget and are not consciously fixated on the language – we learn so much more!