5 Classic Cartoons They Don't Want You To See 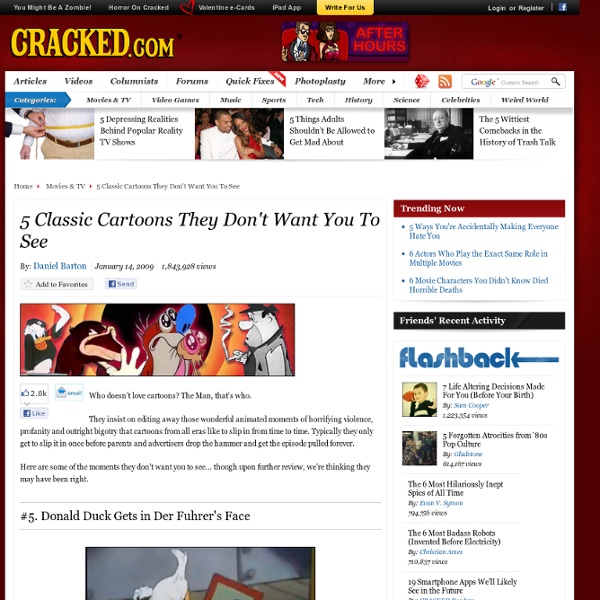 Who doesn't love cartoons? The Man, that's who. They insist on editing away those wonderful animated moments of horrifying violence, profanity and outright bigotry that cartoons from all eras like to slip in from time to time. Typically they only get to slip it in once before parents and advertisers drop the hammer and get the episode pulled forever. Here are some of the moments they don't want you to see... though upon further review, we're thinking they may have been right. Donald Duck Gets in Der Fuhrer's Face The Cartoon: Donald Duck was basically the anti-Mickey Mouse. What many people don't know is that Donald Duck's rise to fame came in 1943 when Disney decided to him dress up like a goddamn Nazi and make fun of the Axis in the animated short "Der Fuhrer's Face": What The Fuck? Yes, this cartoon makes fun of Nazis, but it's still pretty fucking offensive. "Der Fuhrer's Face" was just one in a line of seven Pro-US and Pro-Army shorts done by Disney at the time". The Fallout: Holy shit.

5 Amazing Performances From Actors Who Weren't Acting We believe it was Frank Capra who said, and we're paraphrasing here, "If you want to film someone looking genuinely terrified, you have to scare the shit out of them. If you want your actors to cry, make them sad. And above all else, never tell them what's going on." Directors have been taking those wise words to heart ever since. #5. Previously on Alien, an astronaut was face-raped by an alien. What sells that scene isn't the creature effects, or the fact that if you were an audience in 1979, it was the absolute last freaking thing you expected to happen right then. If you think the other actors' horrified and shocked reactions were convincing, it's probably because they, like their characters, had absolutely no idea what was about to occur. "Yeah, I'm looking forward to many more long days of shooting." So the rest of the cast showed up on set knowing only that the script for this particular scene read, "The thing emerges." "Hey, it does have teeth and a moving head!" #4. #3.

8 Movie Special Effects You Won't Believe Aren't CGI We mean no disrespect to the digital effects artists working in Hollywood, but sometimes it feels like computer-generated (CG) effects haven't improved in 10 years. Every blockbuster seems to have at least one big effects scene that looks like it was lifted from a PS3. So maybe we need to stop and appreciate the mind-blowing scenes that were done the old-fashioned way -- with stunts, models and borderline insanity. The Dark Knight -- The Big Chase Scene It was a chase that destroyed the Batmobile, a Joker-themed semi, a dump truck, a paddy wagon, multiple cop cars and God knows how many bystander vehicles. Batman on a motorcycle. Two specific points during the insane car chase at the halfway point of The Dark Knight are so over-the-top they seem like they would have had to be computer-generated, if for no other reason than they would have killed the stunt drivers. The first is when the Batmobile first shows up to take out the Joker's convoy. Why? CGI is for squares. "Bam. Or Hobbitvision.

The 15 Worst Album Covers of All-Time We don't expect much from album covers. Wear something revealing if you're a pop starlet. If you're Prince, just make sure to wear something. Guns n' Roses- Appetite for Destruction The cover art for a band's debut album is especially important. Luckily for Axl and company, someone talked some sense into them and this cover was replaced with the with the now famous five-skull cross emblem. Birth Control - Operation Feeding infants to a giant insect isn't an effective form of birth control, primarily because, you know, you've already given birth. Boned - Up at the Crack Well Boned, we probably shouldn't be surprised at this point. The Scorpions - Lovedrive This is the album cover equivalent of a bad political cartoon that nobody quite understands. Pooh-Man - Funky as I Wanna Be We might be willing to believe that your nickname has nothing to do with poop. The Frivolous Five - Sour Cream and Other Delights Try not to think about it for too long; the screaming might wake your neighbors.

4 Famous Pop Culture Moments Everyone Remembers Incorrectly I pride myself on having a fairly good memory. Not when it comes to directions, phone numbers, people's birthdays or what my friends look like, mind you; I'm just talking about important things, like pop culture. The parts of my brain that are supposed to be dedicated to remembering where I parked my car, math and whether or not I left my front door unlocked have been reassigned to focus on random bits of pointless TV and movie trivia, because I work for a website that covers pop culture in exhaustive detail (and because I don't actually have anything worth stealing, so really, who cares if my door's unlocked?). It always throws me for a loop, then, when I discover that one of my long-held, previously unquestioned beliefs about pop culture is completely and utterly wrong. These are just a few of the pop culture truths that I need to remind myself of occasionally ... (See Dan as a damn Jedi in Cracked's new Star Wars mini-series.) #4. The Thing You Remember But Actually ... Nope! #3. Nope.

8 Classic Movies That Got Away With Gaping Plot Holes Yeah, even Kane. The greatest film of all time, according to those monocle-wearing types who refuse to even consider Robocop for the title. The Plot: A bunch of reporters try to figure out the meaning of Charles Foster Kane's last words. "Rosebud." The Hole: No one was around to hear them. Now, no one's suggesting that journalists in the 40s weren't good at getting scoops. Kane's nurse, arriving several minutes too late for the movie to make any fucking sense And if they really are just that good, you think they'd also know the twist ending, that Rosebud was his sled (what kind of weirdo names his sled anyway? So the next time some film critic is getting all up in your face, picking holes in your favorite movie, hit them with that, and watch them curl up into a ball and weep like a child. You may not have seen this one if you're the type who refuses to watch movies from before you were born. It's not quite true that no one cared about this plot hole. Subtext: Suck it, Issac!

6 Insane Sequels That Almost Ruined Classic Movies Hollywood may be a soulless machine of sequels, prequels, remakes and ripoffs, but there are some movies that even they won't touch -- some because they are undisputed classics that would only be cheapened by a sequel, and some because there's simply no rational way to continue the story. Well, it turns out that if they've left those movies alone, it's not for lack of trying. Here are six absolutely real and completely insane proposed sequels that were fortunately never made: #6. David Fincher's classic serial-killer flick Se7en has a pretty closed ending: Out of the four main characters, one is shot in the head, one is presumably institutionalized and another one now fits in a small box. In 2002, New Line Cinema grabbed a screenplay by the writer of Ocean's Eleven about a clairvoyant doctor who helps the FBI catch a serial killer and rewrote it as a sequel for Se7en, replacing the protagonist with Morgan Freeman's character from the first film. "Because eat me, that's why." #5. Uh-oh.

6 Classic Movies (That Narrowly Avoided Disaster) Nothing good in life comes easy, not even in Hollywood. The truth is if you go behind the scenes of some of your favorite movies you'll find fuck-ups, failures and bleeding ulcers. If you needed any further proof that perseverance can lead to great things (or at least, a shitload of money), check out the stories behind... Ah, Star Wars (we're talking about the first film - and don't give us any of that "Episode IV" shit, either). The film served as a coming out party for such stars as bearded, nerdy director George Lucas, ruggedly handsome actor Harrison Ford and... and... Harrison Ford and...friends. Well, it worked wonders for Ford and Lucas, anyway. Why We Almost Never Got to See it This production was pretty much a disaster from the first step. We can't imagine why Ford thought this was weird. Over the course of filming, the budget ballooned from $8 million to $11 million (big money back then, especially for a film the studio didn't think could earn it back). Mechanical sharks suck.

7 Classic Disney Movies Based On R-Rated Stories Left on his own, Tarzan receives a telegram that reveals him as the rightful heir to Clayton's estate and all the property that comes with it (which includes Jane, because women are things). Instead of saying the word, kicking Clayton out of his own house and claiming Jane for tax purposes, he chooses to stay silent, thinking that Jane is happy being with Clayton. And... that's it. He simply sacrifices his happiness for Jane's misery. The Disney Happy Ending: Children learn an important lesson in the actions of the celibate antagonist, Frollo: If you are sexually frustrated by a wayward gypsy, just set her on fire and everything will work itself out. There's no way he doesn't have a boner right now. Meanwhile, Quasimodo the hunchback watches from his bell tower, held back by chains but also by his crippling lack of self worth. The Original Ending: Like Kipling, Victor Hugo wasn't big on that Hollywood bullshit. ...Nobody. Romance! Do you have an idea in mind that would make a great article?

5 Ways Stores Use Science to Trick You Into Buying Crap A big chunk of the world economy runs on human weakness. Peer pressure, vanity, insecurity, the fact that we just cannot resist the sight of melted cheese -- all of these will make us fork over our cash. And really, we're fine with that. But what you may not know is that there are some other, much weirder scientific principles that factor into what you buy. You might not know about them, but the people selling you things sure as hell do. You Move in Predictable Patterns You step in the front door of your nearest chain grocery store. This is the only sheep-based image we'll use this article. This is because, after years of analysis of how humans move in a store, they've found that we're as easy to predict as animal migrations. Grocery stores are laid out to lead you around a set path you didn't even know you were following. "Boy, those fresh carrots sure did help me forget that everything in this aisle has been dead for weeks." And sweet lady Boxed Wine. Why It Works: Freaking barbarians.

The 8 Most Violent Falls Ever Survived on YouTube If you follow the laws of physics, gravity causes an object to fall at 9.8 meters per second squared. But there is no law on the Internet. Every day people upload videos of their friends smashing into the ground with a force far beyond the capabilities of our Earth's gravitational pull. In order to study this phenomenon and explain what science can't, I've developed a nearly mathematical system of collision analysis called Shit Eaten vs. Thinkable Impact, or SETI. To find the SETI of a person, cat or fat person's fall, you simply take the amount of their Shit Eaten and divide it by the Thinkable Impact that should have occurred if physics were behaving itself. SETI: 0 percent Yes, it's an amazing impact, and this man's prostate probably deployed out the back of him like an airbag, but given his rate of speed and trajectory, that's exactly what should have happened. #8. SETI: 52 percent YouTube has no shortage of fat women riding mechanical bulls, and the reason for this is obvious. #7.