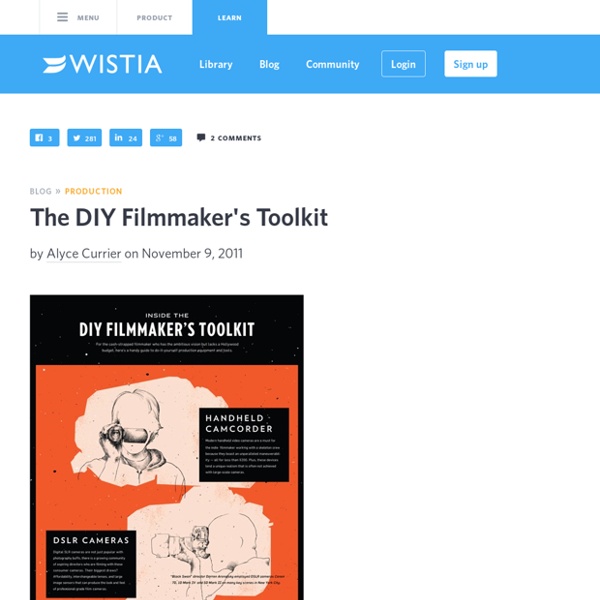 Screenplay Basics - Scripped - StumbleUpon A Scripped Compendium by Johnathan Carr Traditional storytelling recounts past events, whereas screenwriting is locked in the present - thus you may not deviate from PRESENT TENSE. You may also be tempted to describe every inch of the world you're creating - don't! Take comfort in the idea that a screenplay is not meant to have any literary value. Steven Soderbergh: State of Cinema First of all, is there a difference between cinema and movies? Yeah. If I were on Team America, I’d say “Fuck yeah!” [laughter] The simplest way that I can describe it is that a movie is something you see, and cinema is something that’s made.

photography by Angus R Shamal A self portrait of Stanley Kubrick with his daughter, Jack Nicholson and the crew @ the set of The Shining. A selection of some of the most awesome Behind-the-scenes shots I’ve seen from some famous movies found at aintitcool.com. Back when set designs were huge and hand made, when special effects where mechanic and photographic and film stars were risking their lives on the set. on the set of Fritz Lang’s Metropolis — the actress inside the Maria robot taking a breather. The Empire Strikes Back - filming the Crawl.

mental_floss Blog » 15 Film Production Credits Explained Ever wonder what all those strange credits are when they roll by at the end of a film? I used to, until I moved to LA, where I started meeting Best Boys and Dolly Grips with their kids when I took my son to the playground—yes, Hollywood, where you meet Gaffers and Armourers at your average Saturday night house party. So I started asking questions, and here's what I've learned: 1. Boom Operator No, this job has nothing to do with explosives or pyrotechnics.

AC's Top 20 Anime of the Decade & Behind The Nihon Review This has been a decade of mixed reactions for some people. A handful may see it as a period of renaissance, paying tributes to giant robots and classic mecha of the 80s and 90s in the form of instances such as Tengen-Toppa Gurren Lagann and Gundam SEED. Others see it as the period of the rise of subcultures, and the saturation of genres created as groundwork from previous decades. Observations on film art The Adventures of Prince Achmed. Kristin (with some help from David) here: David and I have been offering this greatest-of-90-years-ago series almost as long as this blog has existed. For earlier annual entries, see 1917, 1918, 1919, 1920, 1921, 1922, 1923, 1924, and 1925. I approached 1926 with the assumption that it would present a crowded field of masterpieces; surely it would be difficult to choose ten best films. Instead it turned out that some of the greatest directors of the era somehow managed to skip this year or turn in lesser films.

Quentin Tarantino Lists His Favorite Films Since 1992 Yup, we mentioned Quentin Tarantino last week, and we’re doing it again this week because Rosario has unearthed this nice clip. In six snappy minutes, Tarantino (director of Pulp Fiction, Reservoir Dog, Inglorious Basterds, etc) lists his favorites films made since 1992 — when he, himself, started making films. You’ll know some of these titles, but likely not others. Related Content:

The Path To The New Model: Join The Community > Hope for Film It is easy to speak and to write of community, but how do we actually work together to make it better? We are dispersed across the globe, some professional, some amateur, but all driven by passion for a more diverse and ambitious film culture. We have the tools. We have the know how, but we still have a long road before us. Stepping down the path requires us to put one foot in front of the other, and make some progress, even if it might be in the wrong direction.

How to read a movie Above: Hitchcock's "Notorious" (1946). Bergman on strong axis. Grant at left. Bergman lighter, Grant shadowed. Grant above, Bergman below.