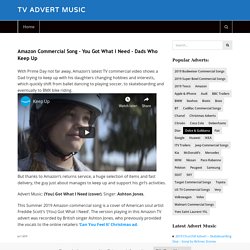 But thanks to Amazon’s returns service, a huge selection of items and fast delivery, the guy just about manages to keep up and support his girl’s activities. Advert Music: (You) Got What I Need (cover). Singer: Ashton Jones. This Summer 2019 Amazon commercial song is a cover of American soul artist Freddie Scott’s ‘(You) Got What I Need’. The version playing in this Amazon TV advert was recorded by British singer Ashton Jones, who previously provided the vocals to the online retailers ‘Can You Feel It’ Christmas ad. Jul 1 2019. Want to try a Movie Talk? Get to know Fritz! – I Heart Input. Hey guys, I know that I have talked about Movie Talks before. 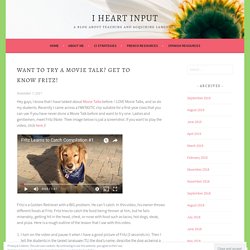 I LOVE Movie Talks, and so do my students. Recently I came across a FANTASTIC clip suitable for a first-year class that you can use if you have never done a Movie Talk before and want to try one. Ladies and gentlemen, meet Fritz (Note: Thee image below is just a screenshot. If you want to play the video, click here.)! Fritz is a Golden Retriever with a BIG problem. I turn on the video and pause it when I have a good picture of Fritz (3 seconds in). Here is why this video is so great to use if you are doing a Movie Talk for the first time: Everyone who has watched this video, whether a student or an adult, has LOVED it. Any other simple, repetitive videos out there that are suitable for Movie Talks? Like this: Like Loading... ORMIE THE PIG - ANIMATION. Simon's Cat 'Let Me In!'. ‫بيتي - مهما كثرت العقبات لا تيأس، تفنن في اللامبالاة..□□ Berthaaaaaa!!!! □□ - Sharon the clucker. 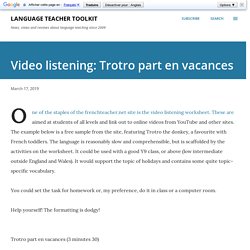 These are aimed at students of all levels and link out to online videos from YouTube and other sites. The example below is a free sample from the site, featuring Trotro the donkey, a favourite with French toddlers. The language is reasonably slow and comprehensible, but is scaffolded by the activities on the worksheet. It could be used with a good Y9 class, or above (low intermediate outside England and Wales). It would support the topic of holidays and contains some quite topic-specific vocabulary. 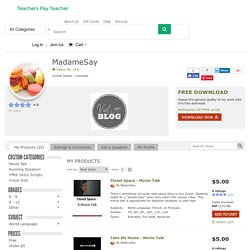 I currently work at a public charter school in the Denver Metro area where we use a CI/TPRS focus. I have been trained in CI/TPRS in courses taught by Blaine Ray, Carol Gaab, Stephen Krashen, and Beniko Mason. I started using CI/TPRS in the fall of 2017, and it's so exciting to see my students grow with this method. I teach lower level students (French 1 and 2) in middle school and high school. CI/TPRS. Yet to be added JYA, Université de Paris IV (La Sorbonne), History // B.A. MONOPRIX_#LaitDroleLaVie. Frigolos. Tomato Festival: □ La Tomatina □ - Easy Spanish - Spanish Festivals #1. Simon’s Cat–Santa Claws MovieTalk – Williamson CI & TPRS.

Here are resources for doing a MovieTalk with the Simon’s Cat video called “Sa nta Claws.” 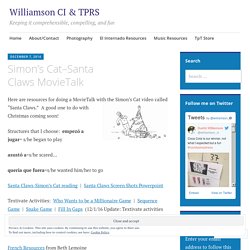 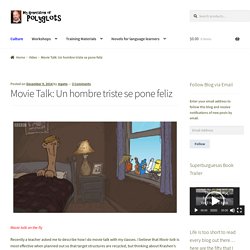 I believe that Movie talk is most effective when planned out so that target structures are recycled, but thinking about Krashen’s argument for non-targeted CI has led me to feel better about all of the Movie talks that I do on the fly. Nonetheless, even with my impromptu movie talks, I am still recycling target structures by relying on the super sixteen verbs that are posted on my wall. Here is an in-depth (perhaps tedious!) Description of how I stretched a 44 second video into a 55 minute lesson with my level 1 students… and we could have kept going!! 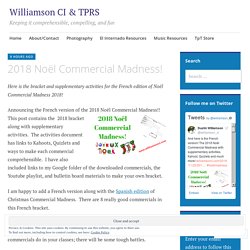 Announcing the French version of the 2018 Noël Commercial Madness!! This post contains the 2018 bracket along with supplementary activities. The activities document has links to Kahoots, Quizlets and ways to make each commercial comprehensible. I have also included links to my Google folder of the downloaded commercials, the Youtube playlist, and bulletin board materials to make your own bracket. I am happy to add a French version along with the Spanish edition of Christmas Commercial Madness. Movietalk Database. Smythe Movie Talks (screenshots!) – Google Drive. Aproveitem 2 minutos do vosso fim de... - Associação ARRISCAR. 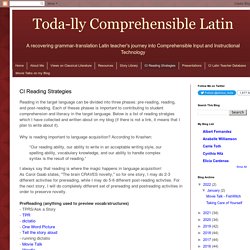 Each of theses phases is important to contributing to student comprehension and literacy in the target language. Below is a list of reading stratgies which I have collected and written about on my blog (if there is not a link, it means that I plan to write about it). Why is reading important to language acquisition? Graphic Novel Training Part 6: More Pre-Teaching with Carrie Toth! Log In To log back in, start by finding your school. 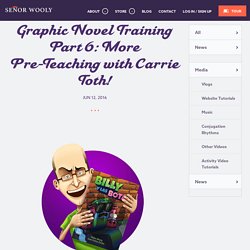 Don't see it? Tell your teacher to contact us, and we'll get it fixed right away. Don't see your teacher? Les chroniques de Mathurin Moreau. MovieTalk101 - Database - Write Christy.Miller to Contribute! How Do I do MovieTalk? Movietalk is the single best, simplest add-on to t.p.r.s. there is. You can do it; your colleagues who don’t use tprs/ci can do it; here is How To Do MovieTalk! All you need is a way to show a video/Internet clip in your class. A) if you have done a story, find a short video– animated film, commercial, public-service ad, clip from a movie– which will let you say your target structures. There are a zillion suggestions on yahoo’s moretprs listserv; some of my favorites include — Birdbox Studios’ youtube offerings (animated– many available) — “Chicken or the Egg?” B). C) Turn sound OFF. D) Play 10-20 seconds of the video. E) Now, point and start making statements, and then circling them. The beauty of MovieTalk is that you can target not only your specific structures but also anything else the students have already seen..

F) When the circling runs out of steam, play 10-30 more seconds of video, then pause and repeat.