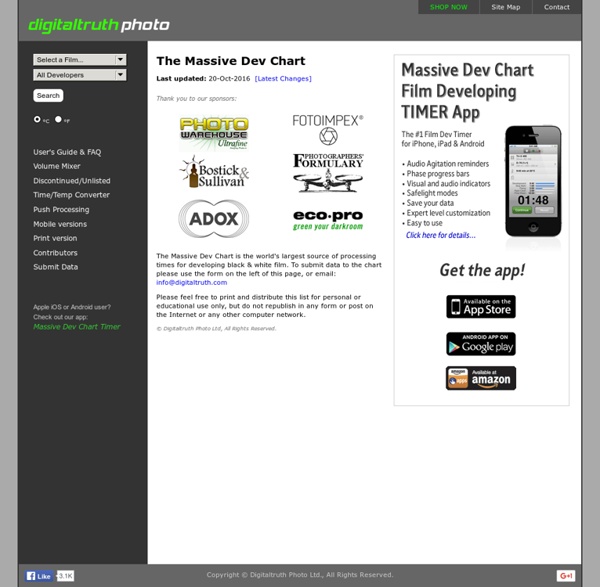 10 Photography Quotes that Every Photographer Should Know In this post Hákon Ágústsson shares some great photography quotes and explains why they’re worth knowing. Take note of and remember the following photography quotes. It’s always worthwhile to learn from masters. “The wisdom of the wise and the experience of the ages are perpetuated in quotations”. – Benjamin Disraeli 1. “ You don’t take a photograph, you make it. – Ansel Adams Full awareness of what makes a good photo is essential in taking great photographs.

Beloved High-Speed Film Camera Faces Extinction For more than five decades, the Charles A. Hulcher Co. filled an important niche in the camera world. Their cameras, which shot up to 100 frames per second, were used to make photos of everything from Space Shuttle launches to Major League Baseball games. 'The camera cannot lie' - meaning and origin of this phrase Meaning Literal meaning. Origin Printed photographs began to be available to the general public around the mid 19th century. When this phrase was coined, which appears to be just a few years later, the view that a photograph was a faithful representation of a scene, in a way that a subjective painting could never be, was a reasonable one. DX encoding 135 Film Cartridge with DX barcode (top) and DX CAS code. The CAS code shows this is (top row) ISO 125 film, (bottom row) 24 exposures, +3/−1 f-stop exposure tolerance. The DX barcode reads 017563, showing DX number 109-12, 24 exposures. DX (Digital indeX) encoding is an ANSI and I3A standard, originally introduced by Kodak in March 1983, for marking 135 and APS photographic film and film cartridges. It has several parts, a latent image DX film edge barcode on the film below the sprocket holes, a code on the cartridge used by automatic cameras, and a barcode on the cartridge read by photo-finishing machines.

Features — Photograd As your project is ongoing, what is the next step? More journeys! In my free time I am still working on Liznojan, it is a project that needs solitude and time. The chlorophyll process « Chlorophyll Process Writer / Tiffany Pereira Photography / Tiffany Pereira and Binh Danh The chlorophyll process is an organic alternative photography process akin to the anthotype process. However, instead of printing on the crushed extract of fruit or plant matter, the prints are bleached by sunlight directly onto the surface of leaves using a positive. Tiffany Pereira shares her experience with this process. Binh Danh – Holding #2From the Immortality: The Remnants of the Vietnam and American War seriesChlorophyll print and resin15 5/8 x 13 1/2 inches 2009 Sunlight, Water and Leaves: Using the pigments of the life-giving photosynthesis process to develop images

Photos from the Real Life Version of 'The Beach' This article originally appeared on VICE Germany Last year, photographer Rebecca Rütten spent three months in a secluded hostel on a tropical island, where a group of backpackers found their utopia. She documented the daily excesses of these scantily dressed free spirits, predominantly from the western parts of the globe and privileged enough to be able to escape normal life for months at a time. Rebecca tried to keep her objective distance as a photographer, but obviously she didn't want to miss the party either. The only way to get close to her subjects was to become part of this group of hedonists who try to find the meaning of life by playing drinking games and fucking each other a lot. She turned those months into a book called Never-Never Land, which starts out with idyllic shots of an untouched rainforest and a pig splashing in the sea.

this photographer made a nude zine of her tumblr friends and tinder matches Fia Yaqub was big on Tumblr before she started sharing her own photography. Her feed of beautiful nudes arranged in tasteful color-coordinated groupings attracted a following that included legendary fashion photographer Nick Knight. While Fia was in her second year at Salford University in the UK, Knight reached out to her and asked her to take over the SHOWstudio Tumblr for a time. Instagram, though, has been less helpful for someone interested in nude photography. "I get my images removed a lot," Fia tells me over the phone from Manchester. "I posted one last night and I knew it was going to get removed and it's already gone.

a new book of unpublished photographs of a young amy winehouse captures her in happier times Amy and Charles formed a friendship during the course of shooting and the portraits show a happy, healthy and relaxed Amy which are in contrast to the barrage of tabloid images that marked her last years. We spoke to Charles about working with Amy and the responsibility of preserving a friend's memory. Your shots are really beautiful and a reminder of happier times for Amy. Why did you wait thirteen years to publish them?

deanna templeton captures the perfect pleasure of skinny dipping The previous owner of artists Deanna and Ed Templeton's house in Huntington Beach, California was an elderly lady. As a result, their swimming pool is just the right size for someone a little over five feet tall to accomplish small laps in. "It's shallow, not that long, and shaped like a peanut," says Deanna. In her new book, The Swimming Pool (due for release through Um Yeah Arts in June), Deanna captures eight summers worth of visiting skinny dippers — friends, and later, friends of friends — suspended in the pool's turquoise water.