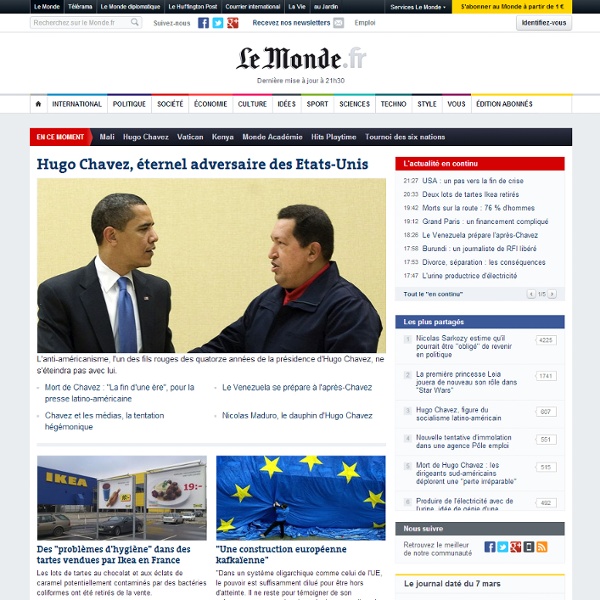 Stunning Bronze Age statuette with a tattooed face and a bone mask found in Siberia 'Given that the discovery is 5,000 years old, you can imagine how important it is to understand the beliefs of the ancient people populating Siberia', said Vyacheslav Molodin. Picture: Novosibirsk Institute of Archeology and Ethnography The discovery was made this summer inside the mass burial of people from Odinov culture in Vengerovsky district of Novosibirsk region, Western Siberia. The small - about a palm size - statuette found in situ by the team of Novosibirsk Institute of Archeology and Ethnography had a mask depicting a bear made of a horse vertebrae. ‘This is without a doubt the find of the season, the find that any world museum from the Hermitage to the Louvre museum would love to exhibit’, said professor Vyacheslav Molodin, head of the Ust-Tartas 2 expedition. ‘We’ve never come across anything like this, despite our extensive knowledge of the Odinov culture’s burial rites.

learn french Welcome to the “Phonetique” site. It is aimed at learners of French as a foreign language, but can also be used by native French speakers. On these pages, you will be able to hear all the sounds of the French alphabet, and those of the international phonetic alphabet. The Relationship Between Facebook and Privacy: It's Really Complicated: Tech News « The tension between Facebook and its users — and governments, and advocacy groups — over privacy is one of the biggest thorns in the company’s side right now, as it tries to balance the demands of the network (and of advertisers) with the desires of users, and with the law. And all of this is taking place in an environment where the very meaning of what is “private” and what is “public” is being redefined, by Facebook and other online giants such as Google, and even users themselves sometimes can’t decide what information they want to share with the world and what they don’t. Over the past few weeks, the social network has been caught at the center of a privacy maelstrom, with consumer groups attacking it — 15 of them filed a formal letter of complaint with the Federal Trade Commission late yesterday — senators sending threatening letters, and growing numbers of users canceling or deactivating their accounts over privacy concerns. And privacy?

Transfert Tshirt Mode JC de Castelbajac, Hugo Boss, Nina Ricci, Kenzo, Delphine Murat, Martin Margiela, David+, Paul & Joe, YSL, Cacharel, Les Nereides, Chanel, Ralph Lauren. Sportswear WHO (secretly) changed their definition of “Herd Immunity” Kit Knightly The World Health Organization has changed the definition of “herd immunity” on the Covid section of their website, inserting the claim that it is a “concept used in vaccination”, and requires a vaccine to be achieved. Both of these statements are total falsehoods, which is demonstrated by the WHO’s own website back in June, and every dictionary definition of “herd immunity” you can find. To quote the WHO’s own original definition:

EcoMate2000 Electronic Dictionary of Finance EN/FR FR/EN With the financial jargon becoming more and more complex for native and non-native speakers alike, there is a need for up-to-date multilingual reference tools. After several years of in-depth, meticulous lexicographical research EcoLinguae is now in a position to present a rich and comprehensive bilingual online translating and explanatory dictionary of economy, banking, business and finance. With more than 6850 entries per language, the dictionary tackles all domains of today's business life, from the most recent Stock Exchange instruments to corporate and trade finance, risk management, accounting, credit practices and custody. EcoMate2000 is now available for online consultation here.

Internet censorship Internet censorship is the control or suppression of what can be accessed, published, or viewed on the Internet. It may be carried out by governments or by private organizations at the behest of government, regulators, or on their own initiative. Individuals and organizations may engage in self-censorship for moral, religious, or business reasons, to conform to societal norms, due to intimidation, or out of fear of legal or other consequences.[1]