Being French and all

Parisians carry on shopping as mass graves are exhumed below their feet. To the shoppers scrutinising the racks of newly arrived spring lingerie on the ground floor of the Monoprix store on the busy Boulevard Sebastopol, there was little to suggest anything unusual. 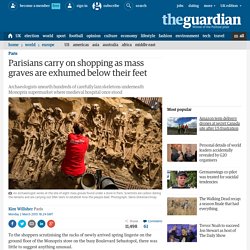 As they queued for baguettes, croissants and loaves at the boulangerie counter – also on the ground floor – most were blissfully unaware that a few metres below them archaeologists were brushing away centuries of sand and dirt to reveal hundreds of skeletons in a series of mass graves. “It’s rather a bizarre thought,” Pierre, a retired civil servant, told the Guardian as he clutched his bread stick on Monday. France faces ‘litmus test’ for freedom of expression as dozens arrested in wake of attacks. A string of at least 69 arrests in France this week on the vague charge of “defending terrorism” (“l’apologie du terrorisme”) risks violating freedom of expression, Amnesty International said. 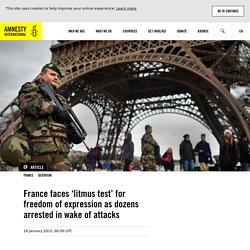 All the arrests appear to be on the basis of statements made in the aftermath of the deadly attacks against the magazine Charlie Hebdo, a kosher supermarket and security forces in Paris on 7 and 9 January. “In a week in which world leaders and millions around the world have spoken out in defence of freedom of expression, the French authorities must be careful not to violate this right themselves,” said John Dalhuisen, Europe and Central Asia Programme Director at Amnesty International. Paris anti-terror rally: all religions, ages and nations in massive show of unity. It was the day Paris united. 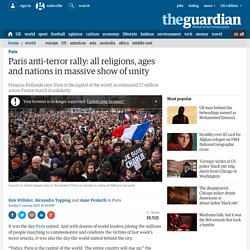 And with dozens of world leaders joining the millions of people marching to commemorate and celebrate the victims of last week’s terror attacks, it was also the day the world united behind the city. “Today, Paris is the capital of the world. The entire country will rise up,” the French president, François Hollande, said. It was the first time since the liberation of Paris in August 1944 that so many people – the interior ministry said there were too many to count but most estimates put it at somewhere between 1.5 million and 2 million – took to the streets of the city. An estimated 3.7 million took to the streets across the whole country. Je Suis Nico. c63d9640-868b-4334-a4f0-d4c4d7800793-bestSizeAvailable.jpeg (JPEG Image, 160 × 214 pixels) 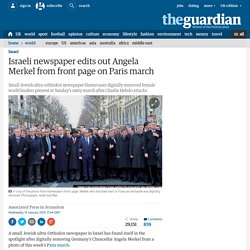 World leaders had linked arms to march in Paris against terrorism after Islamic extremists killed 17 people. At the march, Merkel stood in the front row between the French president, François Hollande, and Palestinian president, Mahmoud Abbas. But readers of the Hamevaser newspaper’s Monday edition didn’t know, as she had been digitally removed, leaving Abbas standing next to Hollande. Israeli media joked it was meant to bring Abbas closer to Israeli premier Binyamin Netanyahu, who was standing nearby. Charlie Hebdo: Turkey will block web pages featuring front cover. A Turkish court has ruled to block some web pages featuring the cover of the French satirical magazine Charlie Hebdo. 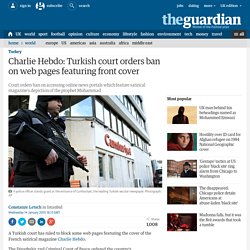 The Diyarbakir 2nd Criminal Court of Peace ordered the country’s telecommunications authority to ban access to some online news portals showing Charlie Hebdo’s latest front cover, which depicts an image of the prophet Muhammad. The semi-official Anadolu news agency said the court ordered the ban on Wednesday morning. Charlie Hebdo : « C’est dur d’être aimé par des cons » ‘Je suis Charlie’? No, You’re Not, or Else You Might Be Dead. One of the spontaneous social-media reactions to the Charlie Hebdo massacre today was the Twitter hashtag #JeSuisCharlie("I am Charlie"). 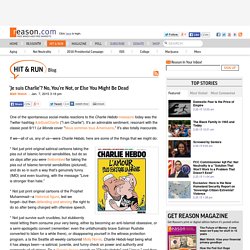 It's an admirable sentiment, resonant with the classic post-9/11 Le Monde cover "Nous sommes tous Americains. " It's also totally inaccurate. If we—all of us, any of us—were Charlie Hebdo, here are some of the things that we might do: * Not just print original satirical cartoons taking the piss out of Islamic-terrorist sensibilities, but do so six days after you were firebombed for taking the piss out of Islamic-terrorist sensibilities (pictured), and do so in such a way that's genuinely funny (IMO) and even touching, with the message "Love is stronger than hate. " * Not just print original cartoons of the Prophet Muhammad—a historical figure, lest we forget—but then defending and winning the right to do so after being charged with offensive speech. Hunt for Charlie Hebdo killers switches to rural France. As day broke in France on Friday, tens of thousands of French police and soldiers resumed their hunt for two Parisian brothers suspected of the massacre at the Charlie Hebdo magazine. 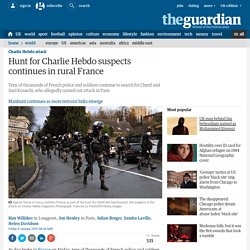 The focus of the pursuit had already shifted from the streets of the capital to the woods and marshes of rural Picardy the previous day. With helicopters buzzing overhead, black-uniformed members of the police special counter-terrorist unit, Raid, rolled along the country roads in armoured cars, combing the wooded hills of the area and going on foot from house to house in a cluster of villages east of the town of Villers-Cotterêts, 70 miles north-east of the capital. Residents in the villages of Longpont and Corcy were told to stay at home while the hunt was under way. John Lewis boss: ‘France is sclerotic, hopeless and downbeat … it’s finished’ John Lewis’s managing director has described France as “sclerotic, hopeless and downbeat” and advised British entrepreneurs doing business in the country to pull out. 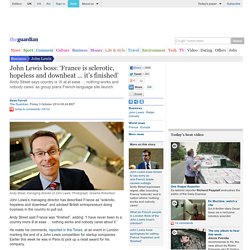 Andy Street said France was “finished”, adding: “I have never been to a country more ill at ease … nothing works and nobody cares about it.” He made his comments, reported in the Times, at an event in London marking the end of a John Lewis competition for startup companies. Earlier this week he was in Paris to pick up a retail award for his company. The 'flaws' of French democracy. 11 June 2014Last updated at 19:05 ET. 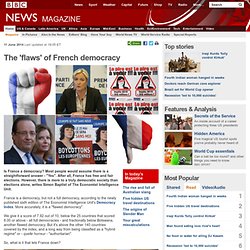 Amélie film director snubs Broadway adaptation. Paris stages &#039;festival of errors&#039; to teach French schoolchildren how to think. Late in the 19th century, while investigating chicken cholera, Louis Pasteur infected some birds with bacteria that he confidently believed would kill them. 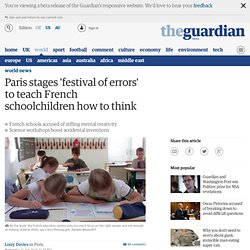 Spécialiste de physique des particules, il menait ses recherches au Cern, qui héberge le grand collisionneur de hadrons (LHC). News Desk: D.S.K. in Jail: The View from Paris. This was the only story on French cable TV news this morning: Dominique Strauss-Kahn, chief of the International Monetary Fund, was reported to be “entirely nude” when a “chambermaid” entered his “three thousand dollar a night suite” at the Times Square Sofitel, at which point he “precipitated” himself on her, then “precipitated” her onto the bed, forcing her to perform “une fellation,” until she fought free of him, and “escaped,” calling the police, while he threw on some clothes and, leaving behind his cell phone and other “personal effects,” he “fled” to J.F.K. International Airport, where he was ensconced on an Air France jet minutes before takeoff for Paris when detectives stopped the flight, and removed him to a “commissariat in Harlem,” where he was held on suspicion of attempted rape and involuntary imprisonment in connection with a sexual assault.