Food in France. History - geography. Euro 2016: the complete guide to every squad and every player in France. Émissions et podcasts de France Culture. French Culture & Etiquette. The French Culture Wars Continue. A few weeks ago, Laurence Rossignol, France’s minister for families, children, and women’s rights, went on a morning talk show, where the host presented her with a series of advertisements for new apparel “adapted for Muslim traditions,” such as headscarves (foulards) and full-body bathing suits, or “burkinis.” 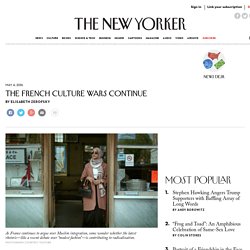 The first image showed a young woman with a screen-printed silk scarf knotted around her head and neck, her lips in a pout tinted the same color as her oversized pale pink coat. The host asked for Rossignol’s opinion on European retailers, such as H & M and Dolce & Gabbana, that are cultivating a niche market in what they call “modest fashion.” Rossignol replied that it was irresponsible for companies to make and market such clothing, and that they share in a duty to help free Muslim women from cultural and religious pressures to cover their bodies. “Of course there are women who choose to wear the veil,” Rossignol said. French Culture: Customs & Traditions. Most people associate French culture with Paris, which is a center of fashion, cuisine, art and architecture, but life outside of the City of Lights is very different and varies by region.

France doesn't just have different cultures; the word "culture" actually comes from France. "'Culture' derives from the same French term, which in turn derives from the Latin colere, meaning to tend to the earth and grow, cultivation and nurture," Cristina De Rossi, an anthropologist at Barnet and Southgate College in London, told Live Science. A guide to French education. This guide to education in France, from primary school to higher education, will help you enrol your child into the French education system. 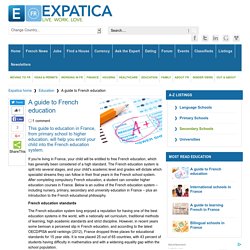 If you're living in France, your child will be entitled to free French education, which has generally been considered of a high standard. The French education system is split into several stages, and your child's academic level and grades will dictate which specialist streams they can follow in their final years in the French school system.