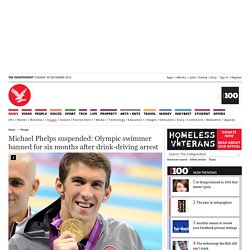 Phelps was arrested early last Tuesday in Baltimore, Maryland, for drunk-driving and speeding. Police said his blood-alcohol content was almost double the legal limit. USA Swimming executive director Chuck Wielgus said in a statement that Phelps had violated the organisation’s code of conduct. “It is our responsibility to take appropriate action based on the individual case. Michael’s conduct was serious and required significant consequences,” Mr Wielgus said. Scott Blackmun, CEO of the US Olympic Committee, said Phelps’s suspension was “appropriate”, adding: “We are grateful that nobody was hurt and appreciate the speed at which USA Swimming and Michael took action.” Olympic swimmer Michael Phelps heading to rehab after second DUI arrest: "I am extremely disappointed" Olympic swimmer Michael Phelps is heading to rehab after his second DUI arrest in 10 years. 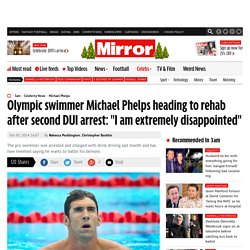 The sportsman has admitted he's "extremely disappointed" with himself and wants to make up for his past mistakes. Taking to Twitter, he wrote: "The past few days have been extremely difficult. "I recognize that this is not my first lapse in judgment, and I am extremely disappointed with myself. I'm going to take some time away to attend a program that will provide the help I need to better understand myself. " He added: "Swimming is a major part of my life, but right now I need to focus my attention on me as an individual, and do the necessary work to learn from this experience and make better decisions in the future. " It comes after he was recently charged with driving under the influence after being pulled over by police in Maryland, USA, on September 30.

One Direction songwriter dismisses plagiarism claims. Paramore singer Hayley Williams and her guitarist boyfriend Chad Gilbert took to Twitter.com last week (ends28Sep14) to point out similarities between the song and a track called It's Not Your Fault by his band New Found Glory. 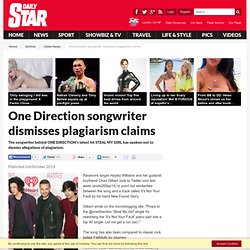 Gilbert wrote on the microblogging site, "Props to the @onedirection 'Steal My Girl' single for reworking the 'It's Not Your Fault' piano part into a top 40 single. Let me get a cut (sic). " The song has also been compared to classic rock ballad Faithfully by Journey. However, Julian Bunetta, who co-wrote Steal My Girl with One Direction members Liam Payne and Louis Tomlinson, insists any likeness is accidental.

He tells MTV, "When we sat down and played the piano lick, nobody had any references in their head about what they wanted to write or anything and then I saw all the things (comments) about that (Journey song). Harry Potter star Rupert Grint: The 'ridiculous' money I was paid tested my friendships. The 26-year-old actor speaks Harry Potter, money, Broadway and the future in an exclusive interview with the Mirror Swapping higher education for Hogwarts, pocket money for pay packets and school corridors for red carpets, Rupert Grint’s childhood was anything but regular. 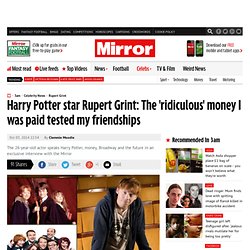 And after 10 years in the hit Harry Potter movies, the young star earned enough money never to have to work again. Exactly how much money, though, is a good question – Rupert says he doesn’t have a clue. While he and his co-star Emma Watson are estimated to each have been paid around £25million for the eight films, he still, to this day, reckons he does not know the full amount. “It was kind of ridiculous what we got,” he says. “And I must admit I don’t actually know how much I earned – the exact number. “I’ve always known it was kinda ‘there’, and I’ve got quite an active involvement in stuff like that now, but I don’t really know the exact figures. How Teenagers Consume Media: the report that shook the City.

Radio Most teenagers nowadays are not regular listeners to radio. 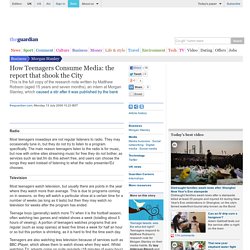 They may occasionally tune in, but they do not try to listen to a program specifically. The main reason teenagers listen to the radio is for music, but now with online sites streaming music for free they do not bother, as services such as last.fm do this advert free, and users can choose the songs they want instead of listening to what the radio presenter/DJ chooses. Television Most teenagers watch television, but usually there are points in the year where they watch more than average. 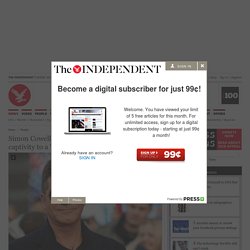 Last week, Cowell apologised for a planned segment filmed by spin-off show The Xtra Factor, during which the final six boys of the competition were seen attending a dolphin show and swimming with the animals.