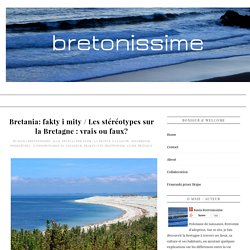 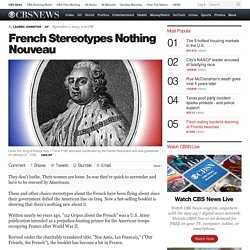 Their women are loose. In war they're quick to surrender and have to be rescued by Americans. These and other choice stereotypes about the French have been flying about since their government defied the American line on Iraq. Now a hot-selling booklet is showing that there's nothing new about it. Written nearly 60 years ago, "112 Gripes about the French" was a U.S.

Revived under the charitably translated title, "Nos Amis, Les Francais," ("Our Friends, the French"), the booklet has become a hit in France. As a history lesson, the book shows that once the euphoria of liberation from Hitler's army wore off, it wasn't all chocolates, chewing gum and kisses that were being exchanged between the French and the GIs.

In question-and-answer format, it lists 112 impressions among the GIs about the French that its author debunks, explains or, in rare cases, confirms. If the French seem unwashed (criticism No. 45), it's because the Germans hogged the soap, the book explains. What's True About French Stereotypes? Author: Maggie Lonsdale BA (hons) - Updated: 20 April 2011| Comment Are stereotypes about the French really true? 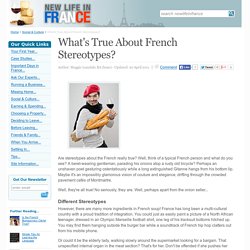 Well, think of a typical French person and what do you see? A beret-wearing gentleman, parading his onions atop a rusty old bicycle? Perhaps an unshaven poet gesturing ostentatiously while a long extinguished Gitanne hangs from his bottom lip. Well, they're all true! Different Stereotypes However, there are many more ingredients in French soup! Or could it be the elderly lady, walking slowly around the supermarket looking for a bargain. Perhaps it is the silver-haired biker with the regulation sideburns and cowboy boots. Or maybe it is the middle aged woman who serves you at the boulangerie. The 10 most hilariously wrong stereotypes about French people. Intercultural differences and misunderstandings ; stereotypes ; French-bashing ; anti-americanism.

Website lists Americans’ top 10 prejudices about the French – The Connexion. AMERICANS see the French as hairy communists who don’t wash but who are also chic and sophisticated, says a French news site. 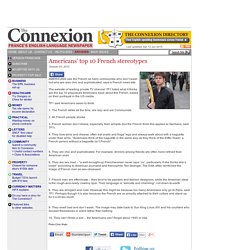 The website of leading private TV channel TF1 listed what it thinks are the top 10 prejudices Americans have about the French, based on their portrayal in the US media. Top Myths About France and the French People. Which French Stereotype Are You? French stereotypes: arrogant and good in bed? Bien sûr! Let's not throw out the cliches with the bathwater. 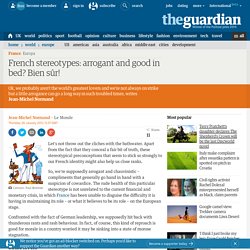 Apart from the fact that they conceal a fair bit of truth, these stereotypical preconceptions that seem to stick so strongly to our French identity might also help us close ranks. So, we're supposedly arrogant and chauvinistic – compliments that generally go hand in hand with a suspicion of cowardice. The rude health of this particular stereotype is not unrelated to the current financial and monetary crisis, in which France has been unable to disguise the difficulty it is having in maintaining its role – or what it believes to be its role – on the European stage.

Confronted with the fact of German leadership, we supposedly hit back with thunderous rants and rash behaviour. In fact, of course, this kind of reproach is good for morale in a country worried it may be sinking into a state of morose stagnation. Strike lovers Well, only the rich get richer, and the ever-rebellious Gaul will see in that particular allegation a kind of tribute. 55 National Stereotypes that will Ruin or Make your Day.

Inspired by an idea of Mon earlier on this post, I searched the net far and wide to find the most common stereotypes about Nationalities. 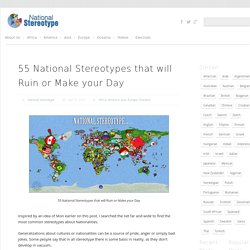 Generalizations about cultures or nationalities can be a source of pride, anger or simply bad jokes. Some people say that in all stereotype there is some basis in reality, as they don’t develop in vacuum. To give a more serious definition: “National Stereotype is a system of culture-specific beliefs connected with the nationality of a person. This system includes beliefs concerning those properties of human beings that may vary across nations, such as appearance, language, food, habits, psychological traits, attitudes, values etc.” True cold-blooded scientists warn, that “National character stereotypes are not even exaggerations of real differences: They are fictions.”

But why judge, before we know what we are talking about? Please take everything below with a grain of salt; as I only summed up what others wrote on the internet.