EPOCH 03/04/11 Guangzhou Continues Battle with Ractopamine, ‘Lean Meat Powder’ A worker checks pigs to be transported to South China's Guangdong Province on a truck in 2007 in Yichang of Hubei Province, China. 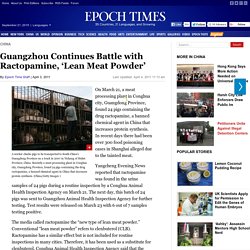 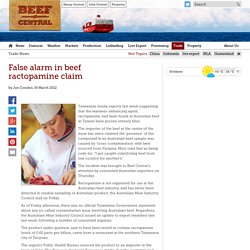 The importer of the beef at the centre of the issue has since claimed the ‘presence’ of the compound in an Australian beef sample was caused by ‘cross-contamination’ with beef sourced from Panama. Most read that as being code for, “I got caught substituting beef from one country for another’s.” The incident was brought to Beef Central’s attention by concerned Australian exporters on Thursday. MSNBC 25/01/12 Dispute over drug in feed limiting US meat exports. Updated on March 23: The FDA on March 14 issued a statement in response to this report, saying it had reviewed its previously published adverse drug effect numbers on ractopamine. 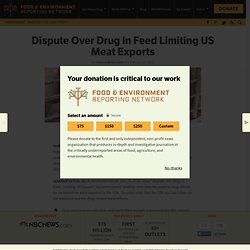 After excluding reports of ineffectiveness, meat abnormalities and fertility abnormalities, it said the number of animals with reports of adverse effects was 160,917. The story reflects this recent analysis by the FDA. CORNUCOPIA 31/10/13 Ractopamine: The Meat Additive on Your Plate That’s Banned Almost Everywhere But America. [Note: Don't panic, go organic! 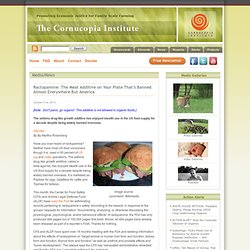 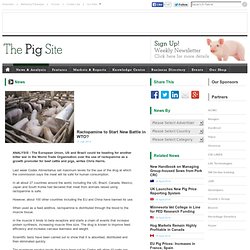 11 July 2012 ANALYSIS - The European Union, US and Brazil could be heading for another bitter war in the World Trade Organisation over the use of ractopamine as a growth promoter for beef cattle and pigs, writes Chris Harris. Last week Codex Alimentarius set maximum levels for the use of the drug at which the commission says the meat will be safe for human consumption. PIG PROGRESS 17/04/13 Rapid tests for ractopamine in pork meat. As international debate continues on the use of the feed additive ractopamine, Neogen Europe Ltd. has launched easy 10 minute tests to detect ractopamine in animal and animal feed samples. 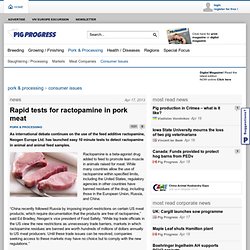 Ractopamine is a beta-agonist drug added to feed to promote lean muscle in animals raised for meat. While many countries allow the use of ractopamine within specified limits, including the United States, regulatory agencies in other countries have banned residues of the drug, including those in the European Union, Russia, and China. “China recently followed Russia by imposing import restrictions on certain US meat products, which require documentation that the products are free of ractopamine,” said Ed Bradley, Neogen’s vice president of Food Safety. FOOD SAFETY NEWS 04/06/13 Smithfield Sale Raises New Questions About the Future of Ractopamine. The sale of Smithfield Foods, the United States’ largest pork producer, to Shuanghui International, China’s largest meat company, raises new questions about the future of ractopamine, a controversial growth-promoting drug that is widely used in U.S. pork production and has long been the subject of trade disputes. 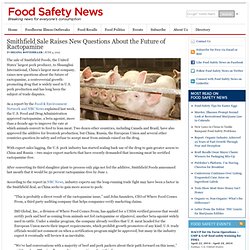 As a report by the Food & Environment Network and NBC News explained last week, the U.S. Food and Drug Administration approved ractopamine, a beta-agonist, more than a decade ago to improve the rate at which animals convert to feed to lean meat. Two dozen other countries, including Canada and Brazil, have also approved the additive for livestock production, but China, Russia, the European Union and several other countries question its safety and refuse to accept meat from animals raised on the drug. After converting its third slaughter plant to process only pigs not fed the additive, Smithfield Foods announced last month that it would be 50 percent ractopamine-free by June 1. 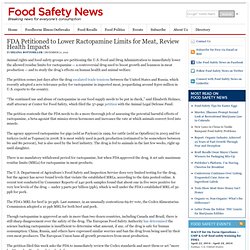 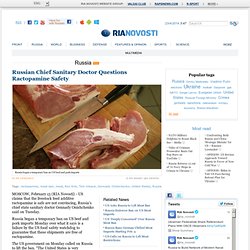 Russia began a temporary ban on US beef and pork imports Monday over what it says is a failure by the US food safety watchdog to guarantee that these shipments are free of ractopamine. The US government on Monday called on Russia to lift the ban. “The United States is very disappointed that Russia has taken action to suspend all imports of US meat, which is produced to the highest safety standards in the world,” US Trade Representative Ron Kirk and US Agriculture Secretary Tom Vilsack in a joint statement on Monday. Onishchenko said: “We are taking that opinion into account, but it does not suit us. NATIONAL HOG FARMER 20/02/13 Senators Call for Action on Ractopamine Meat Ban. A bipartisan group of lawmakers is pressing trade officials to quickly resolve Russia's recent ban on U.S. meat, according to a report from The Hill’s On the Money Blog. 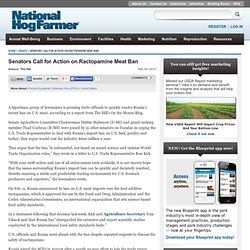 Senate Agriculture Committee Chairwoman Debbie Stabenow (D-MI) and panel ranking member Thad Cochran (R-MS) were joined by 31 other senators on Tuesday in urging the U.S. Trade Representative to deal with Russia’s import ban on U.S. beef, poultry and turkey, they argue would cost the industry $600 million a year. They argue that the ban “is unfounded, not based on sound science and violates World Trade Organization rules,” they wrote in a letter to U.S.

This ban has overridden a decision by the UN’s global food standards body the Codex Alimentarius Commission to allow its use under strict limits. A Council communiqué said a clear message needed to be sent to meat traders, given there was a risk the new standard fixed by the Codex could be considered as “a de facto authorisation of ractopamine”, leading some countries to raise questions about EU policy. The 16-year-old ban would therefore stay. PIGSITE 26/10/12 Europe Slams Codex over Ractopamine Decision. Fri, 26 Oct 2012 GLOBAL - The Council of the European Union has hit out at Codex Alimentarius over its decision to set maximum residue levels of ractopamine in beef and pork because the decision was made by a slim majority of two votes. The council says that Codex standards should be set by consensus rather than a slim majority, because consensus is "a fundamental principal of the organisation". By ignoring this principle, the European Council believes that Codex has undermined the credibility and the potential for universal acceptance of its standards.

The council said that Codex Alimentarius is a risk management body that should take into account all relevant factors relating to the risk to human health through the food chain. FOOD SAFETY NEWS 01/02/13 Russia to Ban U.S. Meat Over Ractopamine Residues This Month. Russia will ban U.S. pork and beef imports starting this month over concerns about ractopamine, a veterinary drug commonly used in North America to boost growth and leanness that is increasingly controversial overseas, according to Russian media reports. “Since the violations continue and we are finding ractopamine in meat shipments from the USA, we plan starting February 11 to impose restrictions on the import of this product,” Sergei Dankvert, the chief of Russian veterinary and food safety service, Rosselkhoznadzor, told Interfax. U.S. trade and agriculture officials have rebuked Russia’s position as retaliatory and unscientific.

“The United States is very concerned that Russia has taken these actions, which appear to be inconsistent with its obligations as a member of the World Trade Organization,” said Agriculture Secretary Tom Vilsack, in December when Russia first announced it would test beef and pork imports for the drug. The U.S. NATIONAL HOG FARMER 12/07/10 Human Safety of Ractopamine Reaffirmed by Scientific Body. The Codex Alimentarius Commission (Codex) has reaffirmed the human safety for Elanco’s feed ingredient compound ractopamine during its 33rd session in Geneva, Switzerland, by holding the MRLs (maximum residue limits) at Step 8 with a work plan. “This consensus decision respects that the Codex independent scientific advice body, the joint FAO/WHO Expert Committee on Food Additives (JECFA), has confirmed the human safety standards for ractopamine three times,” says Jeff Simmons, president of Elanco. “We trust the work plan will provide an opportunity for members to rise above, and bridge across, national preferences and fulfill their role in establishing international food safety standards.”

Delegates to the Codex Commission were considering final adoption of the ractopamine international food safety standards based upon the scientific risk assessment provided by JECFA, which issued a report in May 2010. Additional information is available at www.elanco.com. NATIONAL HOG FARMER 17/08/10 Ractopamine Fed to Finishing Pigs Lowers Environmental Impact.

Improvements in lean growth and feed efficiency when ractopamine hydrochloride is fed to finishing pigs are well documented. Research was conducted to determine if the improvements in nutrient utilization can lead to a demonstrable reduction in the environmental footprint of pork production, specifically water utilization and nitrogen (N) output. Nitrogen in swine manure is problematic because it is excreted in the form of ammonia (NH3), an odorous product with other environmental implications. Ractopamine hydrochloride (RAC, or Paylean from Elanco Animal Health) is a beta-adrenergic agonist that, when added to the diet of finishing swine, improves average daily gain (ADG), feed efficiency and carcass lean growth. These growth performance and carcass improvements are well documented in the literature, but there is limited research on the environmental benefits of RAC supplementation in finishing diets, especially at lower levels of inclusion, permitted in Canada.

FOOD SAFETY NEWS 06/07/12 Codex Adopts Ractopamine Limits for Beef and Pork. FOCUS TAIWAN 15/01/11 AIT urges Taiwan to allow ractopamine in meat. CHINA POST 06/07/12 CAC approves 10 ppb ractopamine residue. The Codex member states voted 69-67 at a meeting held in Rome yesterday afternoon that it is safe to allow 10 ppb residue of ractopamine, a leanness-enhancing drug, in beef and pork — 40 ppb in pig and cattle livers, and 90 ppb in pig and cattle kidneys. The CAC vote is expected to help the ruling and opposition lawmakers reach a consensus on revising the Act Governing Food Sanitation to allow imports of U.S. beef products containing ractopamine.