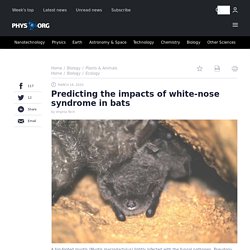 Although the disease has been found throughout much of the world, severe population declines have only occurred in North America—and now researchers at Virginia Tech know why. In a new PNAS study led by Joseph Hoyt, an assistant professor in the Department of Biological Sciences in the College of Science, researchers have found that the pathogen levels in the environment play a major role in whether bat populations are stable or experience severe declines from white-nose syndrome. Hoyt and his international team of researchers published their findings in the Proceedings of the National Academy of Sciences on March 16.

"This study shows that more contaminated environments, or potential 'hot spots,' are going to result in higher disease impacts. When infectious diseases first arise, it is crucial to understand how the disease is being transmitted. RUTGERS UNIVERSITY 04/02/21 Deadly White-Nose Syndrome Changed Genes in Surviving Bats. Study has big implications for management of bat populations. 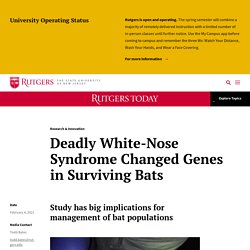 ECOLOGY & EVOLUTION 13/04/20 Are bats adapting to an emergent disease? When I started working with bats ten years ago, white-nose syndrome was something bat biologists had heard about but probably hadn’t seen firsthand. 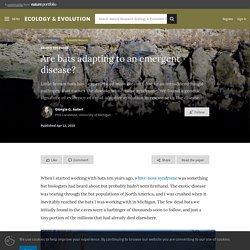 The exotic disease was tearing through the bat populations of North America, and I was crushed when it inevitably reached the bats I was working with in Michigan. The few dead bats we initially found in the caves were a harbinger of thousands soon to follow, and just a tiny portion of the millions that had already died elsewhere. White-nose syndrome brought big changes to the caves and mines where bats were hibernating. The cool, moist air didn’t smell like a cave anymore—it smelled like death. There were decomposing carcasses of animals. Summer bat surveys changed, too. The next winter I started collecting tissue samples from the dead bats we found. Soon after, I joined Dr. UNIVERSITY OF MICHIGAN 20/02/20 First genetic evidence of resistance in some bats to white-nose syndrome, a devastating fungal disease.

ANN ARBOR—A new study from University of Michigan biologists presents the first genetic evidence of resistance in some bats to white-nose syndrome, a deadly fungal disease that has decimated some North American bat populations. 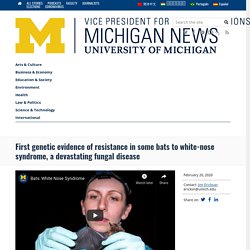 The study involved northern Michigan populations of the little brown bat, one of the most common bats in eastern North America prior to the arrival of white-nose syndrome in 2006. Since then, some populations of the small, insect-eating bat have experienced declines of more than 90%. U-M doctoral student Giorgia Auteri inspects the wing of a healthy big brown bat, one of the species known to be affected by white-nose syndrome. Image credit: Heather Adams U-M researchers collected tissue samples from wild little brown bats that survived the disease, as well as individuals killed by the fungal pathogen. The other author of the Scientific Reports paper is U-M biologist Lacey Knowles, Auteri’s faculty adviser.

More information: NATURE 18/01/21 Ecology and impacts of white-nose syndrome on bats. CBC_CA 03/02/18 Researchers use 'mini tanning beds' to treat white-nose syndrome in bats - UV light damages the fungus wiping out bat colonies across North America. The Achilles' heel of the fungus that is killing millions of hibernating bats in North America could be as close as the local tanning salon. 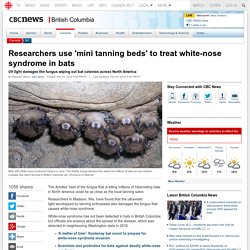 Researchers in Madison, Wis. have found that the ultraviolet light worshipped by tanning enthusiasts also damages the fungus that causes white-nose syndrome. White-nose syndrome has not been detected in bats in British Columbia, but officials are anxious about the spread of the disease, which was detected in neighbouring Washington state in 2016. 'A matter of time': Kootenay bat count to prepare for white-nose syndrome invasion Scientists test probiotics for bats against deadly white-nose syndrome "What we found is UV light damages the DNA of this fungus," researcher Daniel Lindner, told On the Island's Gregor Craigie.

Lindner, a research plant pathologist with the U.S. "This is what happens to us when we get sunburnt. "It's been referred to as mini tanning beds for bats," Lindner said. CBC NEWS 24/09/17 U.S. group funds Canadian research treatments for deadly bat disease. Two federal U.S. agencies are giving money to Canadian researchers trying to save local bats from a deadly fungus. 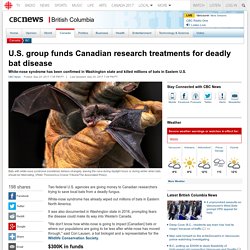 White-nose syndrome has already wiped out millions of bats in Eastern North America. It was also documented in Washington state in 2016, prompting fears the disease could make its way into Western Canada. "We don't know how white-nose is going to impact [Canadian] bats or where our populations are going to be less after white-nose has moved through," said Cori Lausen, a bat biologist and a representative for the Wildlife Conservation Society. WSBTV 07/03/16 Biologists predict 95 percent decline in Georgia bats. By: Craig Lucie Updated: Share this with your friends! 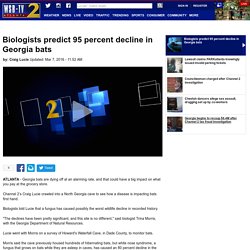 From Biologists predict 95 percent decline in Georgia ATLANTA - Georgia bats are dying off at an alarming rate, and that could have a big impact on what you pay at the grocery store. Channel 2’s Craig Lucie crawled into a North Georgia cave to see how a disease is impacting bats first hand. Biologists told Lucie that a fungus has caused possibly the worst wildlife decline in recorded history. "The declines have been pretty significant, and this site is no different," said biologist Trina Morris, with the Georgia Department of Natural Resources. Lucie went with Morris on a survey of Howard's Waterfall Cave, in Dade County, to monitor bats. 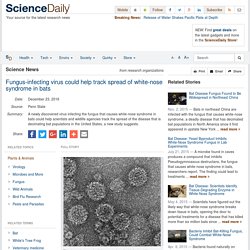 Regional variations in this virus could provide clues that would help researchers better understand the epidemiology of white-nose syndrome, according to Marilyn Roossinck, professor of plant pathology and environmental microbiology, College of Agricultural Sciences, Penn State. White-nose syndrome is a particularly lethal wildlife disease, killing an estimated 6 million bats in North America since it was identified in 2006. The disease, caused by the fungus Pseudogymnoascus destructans, first was found in New York and now has spread to 29 states and four Canadian provinces. "But the virus it harbors has quite a bit of variation," she said. 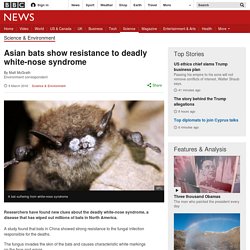 A study found that bats in China showed strong resistance to the fungal infection responsible for the deaths. The fungus invades the skin of the bats and causes characteristic white markings on the face and wings. The scientists involved in the report say some American species may evolve the ability to fight the disease. SCIENCE DAILY 25/10/13 Fungus that causes white-nose syndrome in bats proves hardy survivor.

After taking an in-depth look at the basic biology of a fungus that is decimating bat colonies as it spreads across the U.S., researchers report that they can find little that might stop the organism from spreading further and persisting indefinitely in bat caves. 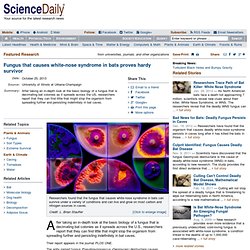 Their report appears in the journal PLOS ONE. The aptly named fungus Pseudogymnoascus (Geomyces) destructans causes white-nose syndrome in bats. The infection strikes bats during their winter hibernation, leaving them weakened and susceptible to starvation and secondary infections. The fungus, believed to have originated in Europe, was first seen in New York in the winter of 2006-2007, and now afflicts bats in more than two dozen states. According to the U.S. The fungus thrives at low temperatures, and spreads to bats whose body temperature drops below 20 degrees Celsius (68 degrees Fahrenheit) when they are hibernating in infected caves. "All in all the news for hibernating bats in the U.S. is pretty grim," Miller said. CBS 05/08/14 Bats' future hangs in the balance as deadly disease spreads. Bats are dying across North America, with a loss of nearly 6 million since 2007. Hibernia Mines was once the largest bat hibernation spot in New Jersey, where as many as 30,000 bats would spend their winters.

But a recent count found fewer than 400 clinging to these cave walls, most dead from white-nose syndrome. Now, this spot and others are sealed off to the public as that disease and its devastation spreads west, CBS News correspondent Don Dahler reports. Jackie Kashmer hand feeds little brown bats every day. "You're a good boy, Squeak. Since 2009, hundreds of bats have been brought to the bat sanctuary she runs in New Jersey. White-nose syndrome kills bats two ways: It destroys the fragile tissue of their wings, making it impossible to fly and to hunt insects, and it causes so much discomfort while they're hibernating that it wakes them up, burning precious calories and forcing them outside in the dead of winter, where they die of starvation. © 2014 CBS Interactive Inc.

CAVING NEWS 05/05/11 White-Nose Syndrome Fungus Geomyces Destructans Likely Native to Europe. BBC 10/04/12 White-nose syndrome in bats continues to spread. 10 April 2012Last updated at 13:20 ET By Mark Kinver Environment reporter, BBC News Despite efforts to control white-nose syndrome, the disease is continuing to spread across the US A fungal disease that has killed more than 5.5 million bats is continuing to spread across North America. White-nose syndrome, first recorded in New York in 2006, is now present in 20 states and four Canadian provinces.

Research just published provides further evidence that the disease is caused by the fungus, and that it originated in Europe. Last year, researchers and policymakers agreed on a national action plan in order to limit the disease's impact. AP 18/02/10 Bat fungus could cause more bugs, hurt crops"Bats, which can eat up to 1,200 mosquitoes an hour, protect crops from. WASHINGTON POST 19/01/12 Nearly 7 million bats may have died from white-nose fungus, officials say. “We’re watching a potential extinction event on the order of what we experienced with bison and passenger pigeons for this group of mammals,” said Mylea Bayless, conservation programs manager for Bat Conservation International in Austin, Tex. “The difference is we may be seeing the regional extinction of multiple species,” Bayless said. “Unlike some of the extinction events or population depletion events we’ve seen in the past, we’re looking at a whole group of animals here, not just one species.

We don’t know what that means, but it could be catastrophic.” Bats are a top nocturnal predator, picking off night-flying insects that feed on agricultural crops and forests.