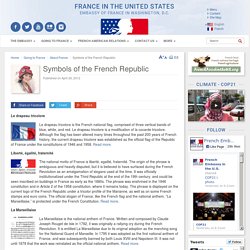 Le drapeau tricolore is a modification of la cocarde tricolore. Although the flag has been altered many times throughout the past 200 years of French history, the current drapeau tricolore was established as the official flag of the Republic of France under the constitutions of 1946 and 1958. Read more. French nationalism. French nationalism is the nationalism that asserts that the French are a nation and promotes the cultural unity of the French. 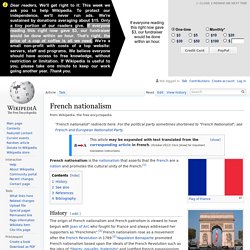 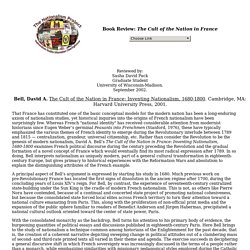 Whereas French "national identity" has received considerable attention from modernist historians since Eugen Weber’s germinal Peasants into Frenchmen (Stanford, 1976), these have typically emphasized the various themes of French identity to emerge during the Revolutionary interlude between 1789 and 1815 — centralization, grandeur, universal citizenship, etc.

Rather than consider the Revolution to be the genesis of modern nationalism, David A. Bell’s The Cult of the Nation in France: Inventing Nationalism, 1680-1800 examines French political discourse during the century preceding the Revolution and the gradual formation of a novel concept of France which would eventually find its most radical expression after 1789. Nationalism In France; & The Politics Of Dissent. Nationalism In France. 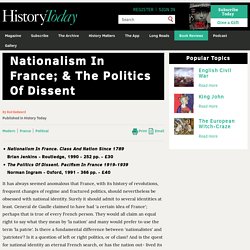 Class And Nation Since 1789 Brian Jenkins - Routledge, 1990 - 252 pp. - £30The Politics Of Dissent. Pacifism In France 1919-1939 Norman Ingram - Oxford, 1991 - 366 pp. - £40 It has always seemed anomalous that France, with its history of revolutions, frequent changes of regime and fractured politics, should nevertheless be obsessed with national identity. Nationalism in the French Revolution of 1789. Flag of France. Design[edit] The colours adopted by Valéry Giscard d'Estaing, which replaced a darker version of the flag. 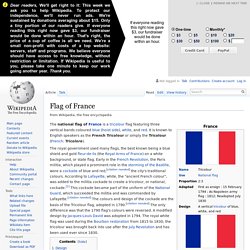 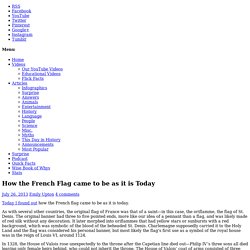 As with several other countries, the original flag of France was that of a saint—in this case, the oriflamme, the flag of St. Denis. The original banner had three to five pointed ends, more like our idea of a pennant than a flag, and was likely made of red silk without any decoration. It later morphed into oriflammes that had yellow stars or sunbursts with a red background, which was symbolic of the blood of the beheaded St.

Denis. In 1328, the House of Valois rose unexpectedly to the throne after the Capetian line died out—Philip IV’s three sons all died leaving only female heirs behind, who could not inherit the throne. What the French Flag Colors Represent. La Marseillaise - France in the United States / Embassy of France in Washington, D.C. Published on November 30, 2007 On July 14, Bastille Day, La Marseillaise, maybe the best-known national anthem in the world, is sung all over France. 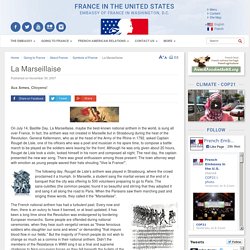 In fact, the anthem was not created in Marseille but in Strasbourg during the heat of the Revolution. General Kellermann, who as at the head of the Army of the Rhine in 1792, asked Captain Rouget de Lisle, one of his officers who was a poet and musician in his spare time, to compose a battle march to be played as the soldiers were leaving for the front. Although he was only given about 20 hours, Rouget de Lisle took a violin, locked himself in his room and composed all night. 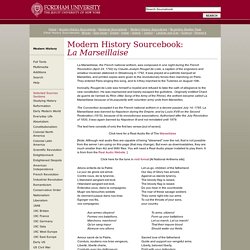 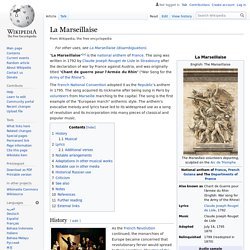 In the wake of the terrorist attacks on France in November 2015, La Marseillaise was labelled by British historian Simon Schama as "the greatest national anthem in the world", as he deemed it to be an anthem that represents "the great example of courage and solidarity when facing danger".[1] The song was written in 1792 by Claude Joseph Rouget de Lisle in Strasbourg after the declaration of war by France against Austria, and was originally titled "Chant de guerre pour l'Armée du Rhin" ("War Song for the Rhine Army"). The Marseillaise was a revolutionary song, an anthem to freedom, a patriotic call to mobilize all the citizens and an exhortation to fight against tyranny and foreign invasion. 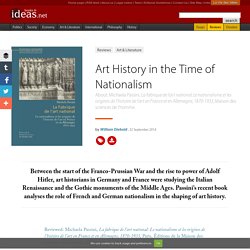 The reasons for this are many and varied; but one consequence is that art historiography, the history of art history, is a much newer field than the parallel histories of literary criticism or history proper. It was only with the so-called new art history of the 1970s and 1980s (now fully institutionalized) that art historiography emerged as anything more than an occasional subject for panegyric, obituary, or autobiography. But Michaela Passini’s book makes clear that art historiography has now come into its own; it is rhetorically and intellectually sophisticated in ways that many of its predecessors were not.

Nationalism and Art History Art as a Sequence of Styles Nota Bene: History of education in France. The education system in France can be traced back to the Roman Empire. Schools may have operated continuously from the later empire to the early Middle Ages in some towns in southern France. The school system was modernized during the French Revolution, but rough in 19th and early 20th century debates ranged on the role of religion.and then there was one Gaul and Roman empire[edit] Middle Ages[edit] French Third Republic. The early days of the Third Republic were dominated by the Franco-Prussian War, which the Republic continued to wage after the fall of Emperor Napoleon III.

Harsh reparations exacted by the Prussians after the war resulted in the loss of Alsace-Lorraine, social upheaval, and the establishment of the Paris Commune. Early governments of the Third Republic considered re-establishing the monarchy; however, confusion as to the nature of that monarchy, and who among the various deposed royal families would be awarded the throne, caused those talks to stall. Thus, the Third Republic, which was originally intended as a transitional government, instead became the permanent government of France. French Third Republic. Education.