What can we in Asia learn from the horsemeat contamination scandal in Europe? 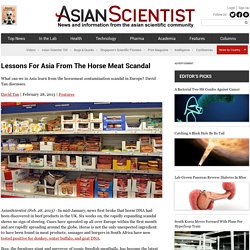 David Tan discusses. David Tan | February 28, 2013 | Features AsianScientist (Feb. 28, 2013) - In mid-January, news first broke that horse DNA had been discovered in beef products in the UK. Six weeks on, the rapidly expanding scandal shows no sign of slowing. Cases have sprouted up all over Europe within the first month and are rapidly spreading around the globe. Ikea, the furniture giant and purveyor of iconic Swedish meatballs, has become the latest merchant to recall food products because of horse meat contamination.

Affected food products have mostly been frozen processed items such as lasagna and burgers, and typically of the budget variety. Consequences of mislabeling food For a start, there is the opportunity for making bigger profits because horse meat, in general, is about 40 percent cheaper than beef. Provenance and traceability. VOICE OF RUSSIA via YOUTUBE 18/02/13 Horsemeat scandal: the VoR debate. Procedia Economics and Finance Volume 23, 2015, Pages 697–703 Horse Meat Consumption − Between Scandal and Reality. Volume 23, 2015, Pages 697–703 2nd GLOBAL CONFERENCE on BUSINESS, ECONOMICS, MANAGEMENT and TOURISM Edited By Andreea Iluzia Iacob Abstract. 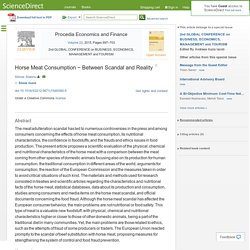 Journal of Contemporary European Studies 03/02/16 Constructing the Eastern European Other: The Horsemeat Scandal and the Migrant Other. International Journal of Strategic Communication - 2015 - Trust and Brand Recovery Campaigns in Crisis: Findus Nordic and the Horsemeat Scandal. THE GUARDIAN 07/01/16 Three years on from the horsemeat scandal: 3 lessons we have learned. The horsemeat scandal of early 2013 sent shockwaves across the food industry. 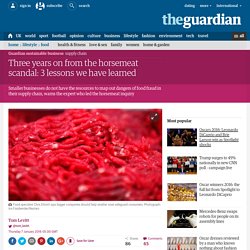 After weeks of bad headlines, the UK government finally responded by agreeing to an independent inquiry to look into how horsemeat got into ready meals and frozen beefburgers. Heading up that investigation was Prof Chris Elliott, a long-time food safety specialist. His conclusions were scathing: with little investigation or prosecution of food crime there was a “huge incentive for the criminal to pursue food crime”. Three years on, I caught up with Elliott to find out if the supply chain is any safer today and what, if any, lessons have been learned. Here are his three key points: Food crime is now a known risk to companies. Procedia Economics and Finance Volume 23, 2015, Pages 697–703 Horse Meat Consumption − Between Scandal and Reality. THE HORSE 18/09/14 U.K. to Introduce New Database in Wake of Horsemeat Scandal. 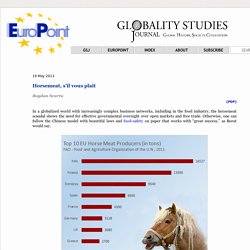 Otherwise, one can follow the Chinese model with beautiful laws and food-safety on paper that works with “great success,” as Borat would say.

FOOD MANUFACTURE 18/02/13 Supermarkets under fire from PM for horse ‘silence’. Sources close to the Prime Minister spoke out against the retailers’ silence on horse meat “It isn’t acceptable for retailers to remain silent while consumers have been misled about the content of the food they have been buying,” a source told BBC News. 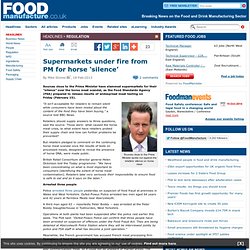 Retailers should supply answers to three questions, said the source. Those were: what caused the horse meat crisis, to what extent have retailers probed their supply chain and how can further problems be prevented? MIRROR 13/02/13 Revealed: missing link in chain between Romanian abattoir and French food factory. The Dutch firm bought £45,000 of horsemeat from the Romanian abattoir known to have sold horse cuttings that eventually ended up in Britain Rex A Dutch meat broker can today be revealed as the missing link in the horse meat scandal. 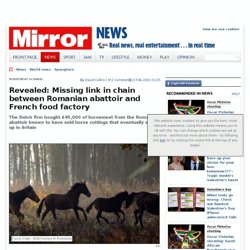 Draap Trading Limited bought £45,000 of horsemeat from Romanian abattoir, CarmOlimp, which is known to have sold horse cuttings that eventually ended up in Britain. One of Draap’s customers is French firm Spanghero, which supplied Findus – whose beef lasagnes were shown to be 100% horse. It is thought Draap acted as “middle man” between the remote slaughterhouse in Brasov, Romania, and France. Shipping documents show lorries transported horse meat from Romania to a cold storage warehouse owned by firm Nemijtek in Breda, Holland. The meat was stored at the warehouse, used by Draap, temporarily before being sent on to France. Spanghero president Barthelemy Aguerre said last week: “We bought European origin beef and resold it. “We are honest and hardworking. DUTCH NEWS 13/02/13 Breda meat company implicated in widening horsemeat scandal. 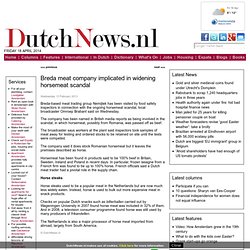 REUTERS 13/02/13 Food testing firms poised to benefit from horsemeat fallout. REUTERS 12/02/13 British police mount raid as horsemeat scandal widens. ACT MEDIA (Agence Roumaine) 13/02/13 EU ministers to meet over horsemeat concerns. Wednesday, February 13, 2013 EU ministers will hold a meeting in Brussels today (13 February) to deal with the fallout from the horsemeat scandal as investigations in France and the UK continued Monday.The scandal, which has already impacted on distributors in the UK, France, Sweden, Ireland and Romania, has raised questions about the complexity of the food industry's supply chains across the EU. 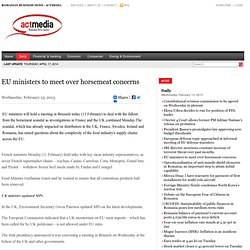 A FORMER Government scientist says it is not surprising the horse meat debacle ensued after the European Commission last year banned desinewed meat (DSM) with only ‘a couple of days’ notice. 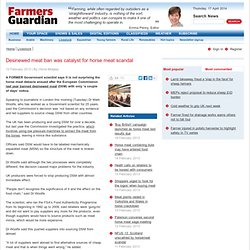 Speaking to journalists in London this morning (Tuesday) Dr Mark Woolfe, who has worked as a Government scientist for 25 years, said the Commission’s decision was ‘not based on any evidence’ and led suppliers to source cheap DSM from other countries. The UK has been producing and using DSM for over a decade, but last year the Commission investigated the practice, which involves using low pressure machines to extract the meat from the bones, leaving a mince like substance. FARMERS GUARDIAN 11/02/13 EU-wide horse meat criminal investigations underway. A CRIMINAL investigation is underway in the UK and across Europe as the horse meat scandal threatens to engulf the food manufacturing industry. 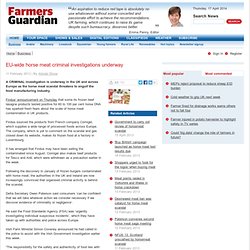 Findus’ announcement on Thursday that some its frozen beef lasagne products tested positive for 60 to 100 per cent horse DNA has sparked fresh fears about the scale of horse meat contamination in UK products. Findus sourced the products from French company Comigel, which supplies a wide range of processed foods across Europe. The company, which is yet to comment on the scandal and gas closed down its website, makes its frozen food at a factory in Luxembourg. It has emerged that Findus may have been selling the contaminated since August.

Comigel also makes beef products for Tesco and Aldi, which were withdrawn as a precaution earlier in the week. Defra Secretary Owen Paterson said consumers ‘can be confident that we will take whatever action we consider necessary if we discover evidence of criminality or negligence’. THE INDEPENDENT 10/02/13 Horsemeat found in British supermarkets 'may be donkey' Horse-drawn carts were a common form of transport for centuries in Romania, but hundreds of thousands of the animals are feared to have been sent to the abattoir after the change in road rules. The law, which was passed six years ago but only enforced recently, also banned carts drawn by donkeys, leading to speculation among food-industry officials in France that some of the “horse meat” which has turned up on supermarket shelves in Britain, France and Sweden may, in fact, turn out to be donkey meat.

“Horses have been banned from Romanian roads and millions of animals have been sent to the slaughterhouse,” said Jose Bove, a veteran campaigner for small farmers who is now vice-president of the European Parliament agriculture committee. CNN 10/02/13 Battle over blame after horse meat found in beef products. NEW: Six big French retailers pull lasagne and other productsComigel CEO tells a French news agency his company was "fooled" Findus Nordic CEO calls Comigel "the villain"Horsemeat isn't a health hazard, but could contain a veterinary drug unsafe for humans (CNN) -- High-stakes lawsuits, overlapping investigations and a bitter battle over blame are spreading across Europe in the wake of a scandal that has rocked the meat industry.

Horse meat was discovered in products that are supposed to be 100% beef, sold in Sweden, the United Kingdom and France. On Sunday, a major company under scrutiny called one of its suppliers a "villain" responsible for the fraud. The supplier, in turn, insisted it was "fooled" by a subsupplier. While authorities say there is no immediate cause for health concerns, the discovery was a new shock to an industry already reeling from a bombshell last month when Irish investigators found horse and pig DNA in numerous hamburger products. AP 10/02/13 France hunting fraudsters in horsemeat scandal.

PARIS (AP) — Europe's horsemeat scandal is spreading and threatening cross-border tensions, as France says Romanian butchers and Dutch and Cypriot traders were part of a supply chain that resulted in horsemeat disguised as beef being sold in frozen lasagna around the continent. No one has reported health risks from the mislabeled meat, but it has unsettled consumers across Europe. Accusations are flying. In France, the foreign minister called it "disgusting," and consumer safety authorities increased inspections of the country's meat business, from slaughterhouses to supermarkets. Romania's president is scrambling to salvage his country's reputation. A Swedish manufacturer is suing a French supplier central to the affair.

The motivation for passing off horsemeat as beef appeared to be financial, and authorities are concentrating on pursuing anyone guilty of fraud in the affair, said France's junior minister for consumer goods, Benoit French Benoit Hamon. THE TELEGRAPH 10/02/13 Horse meat could be harmful, Government admits amid calls for random testing on products.