The Franco-American WebSite ; intercultural ; tips for americans about France and Paris ; France and the French 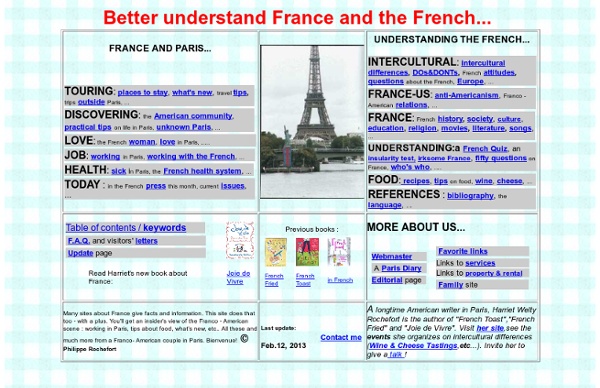 Essential French Langauge Tools — La Belle in France The Importance of Benevolent Dictators I believe that groups coming together to make tough decisions driven by consensus tend to make poor decisions. This is especially true in startups where speed matters and where there is a need to constantly calibrate direction and where these decisions can have existential outcomes. Should you increase your burn rate by adding 2 senior hires who will help you ship faster or sell more but then have less time for fund raising? Or maybe their existence itself will help accelerate fund raising. Who the fuck knows? It’s hard being a leader. But you need conviction. Leaders need to be respected, not loved. It’s why I look for strong leaders in companies that I back. I have seen the sclerotic pace of decision-making by some co-founders who don’t have a common sense of purpose or the ability to resolve conflict when different opinions result in delayed actions. It’s why I caution people about whom you choose as your co-founder. I believe in “benevolent dictators.” Or firing people. Fuck ‘em. Think.

Places To Visit, Trip Planner, Travel & Vacation Ideas Life Hack Ninja | life tips, self improvement, and throwing stars Cooking For Engineers - Step by Step Recipes and Food for the Analytically Minded. Big Questions - Trivia, Quizzes, and Brain Teasers As they say, it takes money to make money, and Hollywood is certainly spending its fair share. No one knows when, exactly, parents began terrifying their children with the prospect of a post-lunch drowning. But there are a few theories as to why. Most people are probably more concerned with how much money is saved in their piggy bank rather than wondering why exactly we save our spare coins in pig-shaped containers. But how did those containers get that shape? The voting process that determines Oscar nominees is a long and complicated undertaking that involves more than 6000 voting members and hundreds of eligible films, actors, actresses, directors, cinematographers, editors, composers, and more. From reality TV shows to The Beach Boys’ croons of Aruba and Jamaica, references to honeymoons are everywhere. Comparing a dog's mouth with a human's mouth is sort of like comparing apples and oranges—really filthy apples and really filthy oranges.

Letters of Note The Daily Miscellany Bill Hammack's Video & Audio on Engineering Dubai Architecture- The Burj al Alam, or The World Tower. Upon completion it will rank as the world's highest hotel. It is expected to be finished by 2009. At 480 meters it will only be 28 meters shorter than the Taipei 101. The Trump International Hotel & Tower, which will be the centerpiece of one of the palm islands, The Palm Jumeirah. Dubailand. Dubailand will be built on 3 billion square feet (107 miles^2) at an estimated $20 billion price tag. Dubai Sports City. Currently, the Walt Disney World Resort is the #1 tourist destination in the world. The Dubai Marina is an entirely man made development that will contain over 200 highrise buildings when finished. The Dubai Mall will be the largest shopping mall in the world with over 9 million square feet of shopping and around 1000 stores. Ski Dubai, which is already open, is the largest indoor skiing facility in the world. The UAE Spaceport would be the first spaceport in the world if construction ever gets under way. Some other other crazy shit...