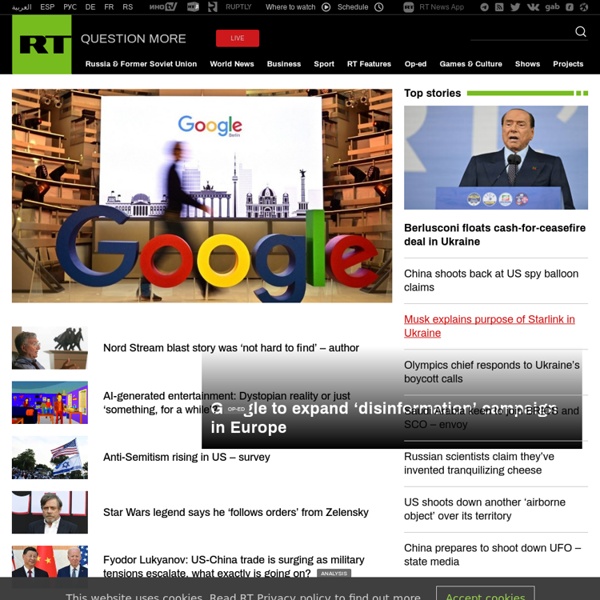 HackerspaceWiki Hackerspaces are community-operated physical places, where people can meet and work on their projects. This website is for Anyone and Everyone who wants to share their hackerspace stories and questions with the global hackerspaces community. Regular Events Call-in - Call-ins provide an opportunity for existing hackerspaces to provide an update and highlight upcoming events, and new/planned hackerspaces can ask questions. First Sunday each month. Synchronous Hackathon - Hackerspaces worldwide use the internet to interact and hack for the weekend. Resources Hackerspaces Blog: The Hackerspaces blog showcasing interesting projects and events around the world at hackerspaces.

The Conversation: In-depth analysis, research, news and ideas from leading academics and researchers. Magazine | The rival to the Bible What is probably the oldest known Bible is being digitised, reuniting its scattered parts for the first time since its discovery 160 years ago. It is markedly different from its modern equivalent. What's left out? The world's oldest surviving Bible is in bits. For 1,500 years, the Codex Sinaiticus lay undisturbed in a Sinai monastery, until it was found - or stolen, as the monks say - in 1844 and split between Egypt, Russia, Germany and Britain. Now these different parts are to be united online and, from next July, anyone, anywhere in the world with internet access will be able to view the complete text and read a translation. For those who believe the Bible is the inerrant, unaltered word of God, there will be some very uncomfortable questions to answer. The Codex, probably the oldest Bible we have, also has books which are missing from the Authorised Version that most Christians are familiar with today - and it does not have crucial verses relating to the Resurrection. Discrepancies

World Digital Library Home Global Research The News Business: Out of Print: Reporting & Essays The American newspaper has been around for approximately three hundred years. Benjamin Harris’s spirited Publick Occurrences, Both Forreign and Domestick managed just one issue, in 1690, before the Massachusetts authorities closed it down. Harris had suggested a politically incorrect hard line on Indian removal and shocked local sensibilities by reporting that the King of France had been taking liberties with the Prince’s wife. It really was not until 1721, when the printer James Franklin launched the New England Courant, that any of Britain’s North American colonies saw what we might recognize today as a real newspaper. Franklin, Benjamin’s older brother, refused to adhere to customary licensing arrangements and constantly attacked the ruling powers of New England, thereby achieving both editorial independence and commercial success. Until recently, newspapers were accustomed to operating as high-margin monopolies. Additional oddities abound.

Mediaite.com | News & Opinion | Media: TV, Print, Online, Jobs, Ranking Welcome to Waterstones.com Scoop - New Zealand News Conspiracy Theorist conspiracy theorist » Bush and His Aides Made 935 False Statements about Iraq In the 2 Years After 9/11 Given the Republican obsession with Benghazi talking points, it’s time for a very specific flashback. In 2008, two non partisan groups released a study that determined that President Bush and his top aides made Read More » Something Is Wrong – Do You Feel It? There is something "in the air" these days and many people are feeling it. Report: U.S. Former FBI translator Sibel Edmonds has been deemed credible by the Department of Justice’s Inspector General, several senators (free subscription required), and a coalition of prominent conservative and liberal groups George W Bush Practically Admits 9/11 was a ‘Conspiracy’ Plot Interesting recent interview: George almost slips - 9/11 was a cons plot!!! 100 Critical Points About 9/11 It's time for ‘debunkers’ to showcase their years of hard work. The 9/11 Truth vs.The BBC Court Case British Man Wins Small Victory For 9/11 Truthers