Get the Facts: Five Reasons Why the U.S.-Mexico Border Is Critical to the Economy. The U.S. 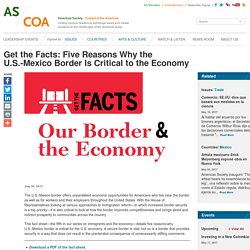 -Mexico border offers unparalleled economic opportunities for Americans who live near the border as well as for workers and their employers throughout the United States. With the House of Representatives looking at various approaches to immigration reform—in which increased border security is a top priority—it is also critical to look at how the border improves competitiveness and brings direct and indirect prosperity to communities across the country.

This fact sheet—the fifth in our series on immigrants and the economy—details five reasons why U.S. Trump USA YMCA Parody Song. Build the Wall Song! By Donald J. Trump. Donald Trump says he'd build a wall along the Mexican border. We tried to figure out how. The no-goes As far as building materials go, there are a few options. 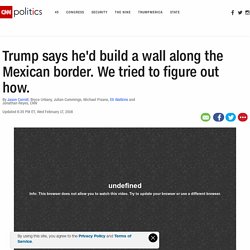 The construction experts CNN spoke to said the strongest wall would be made of cinder blocks. However, the process to build such a wall, stacking each block, one-by-one, over the entire border, would be too labor-intensive to make this choice feasible. Another way, the experts said, would be pouring liquid cement high along the entire southwestern frontier. But as the cement solidifies in those hot temperatures, the resulting wall could become weak, leaving the project at risk of literally crumbling. A possible answer If a cinder block wall is too difficult and a pour-over wall too weak, the construction experts said a wall fashioned out of pre-casted concrete panels would be the workable choice. Each panel, rising 20 feet high and set at least five feet underground, would extend 10 feet, then each would be lined up with reinforced steel along roughly 2,000 miles of border. NAFTA and Mexican Immigration. It was supposed to be the magic wand that took care of immigration. 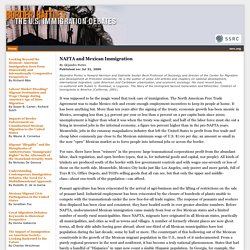 The North American Free Trade Agreement was to make Mexico rich and create enough employment incentives to keep its people at home. It has been anything but. More than ten years after the signing of the treaty, economic growth has been anemic in Mexico, averaging less than 3.5 percent per year or less than 2 percent on a per capita basis since 2000; unemployment is higher than what it was when the treaty was signed; and half of the labor force must eke out a living in invented jobs in the informal economy, a figure ten percent higher than in the pre-NAFTA years.

Meanwhile, jobs in the runaway maquiladora industry that left the United States to profit from free trade and cheap labor commonly pay close to the Mexican minimum wage of U.S. $7.00 per day, an amount so small in the now “open” Mexican market as to force people into informal jobs or across the border. The America's, lesson - ndeuropeanstudies. C. 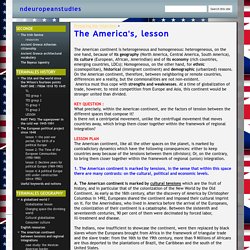 The American continent is marked by economic tensions linked to its strong socio-spatial inequalities perceptible at different scales. Between North and South America, first of all, there is a strong opposition between a highly developed North and a South characterized by massive poverty, albeit (quoique) varying according to the state and especially in the process of regression everywhere. These profound differences between the North and the South are, correspondingly, at the origin of a massive migratory system. Migration to the United States comes mainly from the Caribbean Basin, Mexico and, secondarily, from South America. Latin America, however, is not homogeneous. Transition: The Americas, whatever the sector concerned, and whatever the scale adopted, is indeed marked by numerous tensions. The future of the US-Mexican border: inside the 'split city' of El Paso-Juárez.

Unlike most teenagers, Ashley Delgado starts her school day by crossing an international border. 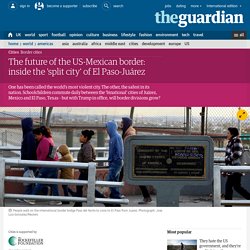 She gets up at 5am so her mother Dora can drive through Juárez’s dense traffic to the Paso del Norte bridge, where she follows the caged pathway between Mexico and the United States by foot. Clearing customs takes on average half an hour, but often it’s double that – depending on the line and the guards’ moods. “Sometimes they put people in a little room for investigation and start to ask questions,” says the 14-year-old as her mum picks her up from the Mexican side at the end of a school day. “Where are you from? What are you bringing? Ashley escapes these questions thanks to her dual citizenship; an access-all-areas pass in the twin border cities of Juárez in Mexico and El Paso in the US state of Texas. A low electric fence marks the two cities’ dividing line, with four border crossing points stemming the constant two-way traffic.

Others simply have to wait.