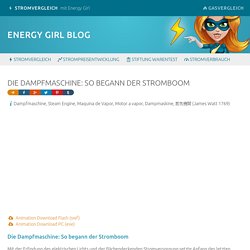 The Industrial Revolution in the United States - Primary Source Set. Primary Source Documents - Industrial Revolution in Europe. WomenPreindustrialSocietyEurope. Preindustrial Societies: The Birth of Inequality. History - British History in depth: Who Wants to Be a Cotton Millionaire? The impact of the railways. Textiles industry. Sometimes a series of technological improvements causes dramatic change in the nature of society and in the way work is organised. 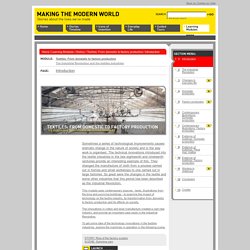 The technical innovations introduced into the textile industries in the late eighteenth and nineteenth centuries provide an interesting example of this. They changed the manufacture of cloth from a process carried out in homes and small workshops to one carried out in large factories. Internet History Sourcebooks. Industrial Revolution See Main Page for a guide to all contents of all sections. 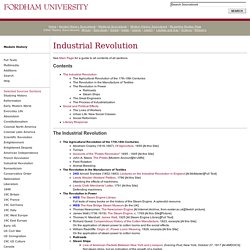 Guns Germs & Steel: The Show. Overview. Overview Based on Jared Diamond's Pulitzer Prize-winning book of the same name, Guns, Germs and Steel traces humanity's journey over the last 13,000 years – from the dawn of farming at the end of the last Ice Age to the realities of life in the twenty-first century. 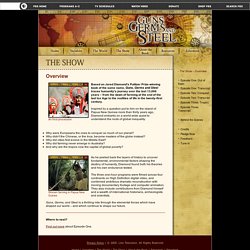 Inspired by a question put to him on the island of Papua New Guinea more than thirty years ago, Diamond embarks on a world-wide quest to understand the roots of global inequality. Why were Europeans the ones to conquer so much of our planet? Guns Germs and Steel - Out of Eden - 1/3 HD. Industrial Revolution Movies. Lesson Series Industrial revolution. BBC Game: Who Wants to Be a Cotton Millionaire? Animation of How a Steam Locomotive's Boiler Works. Steam Engine Operation - How Steam Engines Work. The following diagram shows the major components of a piston steam engine. 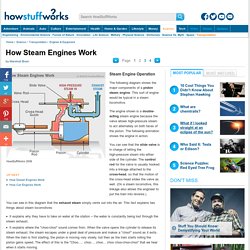 This sort of engine would be typical in a steam locomotive. Reasons for the Industrial Revolution I IT'S HISTORY. Revolution in the Textile Industry. Video spinning machine. Historiographical debates. A huge topic! 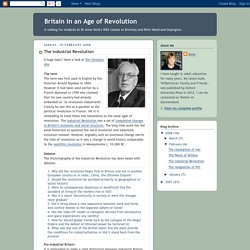 Have a look at this fantastic site. The termThe term was first used in English by the historian Arnold Toynbee in 1884. However it had been used earlier by a French diplomat in 1799 who claimed that his own country had already embarked on ‘la révolution industrielle’. Clearly he saw this as a parallel to the political revolution in France. The Source-Child Labor. The Source Source Home l Introduction l Connecting to Illinois l Places to Go Primary Sources to See TPS EIU Staff Pick l Primary Sources in the Classroom l loc.gov l PDF with Images This publication is created to be a source of information and inspiration for teachers as they incorporate Library of Congress digitized primary sources and resources into instruction by Teaching with Primary Sources at Eastern Illinois University. 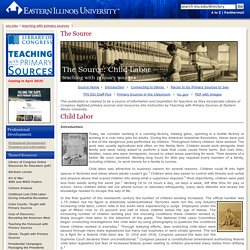 Child Labor Introduction Today, we consider working in a canning factory, making glass, spinning in a textile factory or working in a coal mine jobs for adults. Child labor was attractive to business owners for several reasons. Why was the Industrial Revolution British? Robert C. 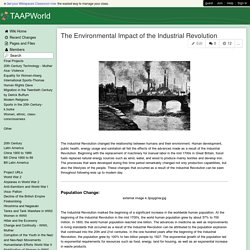 Human development, public health, energy usage and sanitation all felt the effects of the advances made as a result of the Industrial Revolution. Beginning with the replacement of machinery for manual labor in the mid 1700s in Great Britain, fossil fuels replaced natural energy sources such as wind, water, and wood to produce mainly textiles and develop iron. The processes that were developed during this time period remarkably changed not only production capabilities, but also the lifestyles of the people. These changes that occurred as a result of the Industrial Revolution can be seen throughout following eras up to modern day. Population Change: Online text book Industrial Revolution. What was Pre-Industrial Society Like? 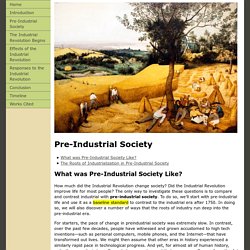 The rapid movement was not without strife. Conditions were dirty, crowded, and often extremely dangerous. The soaring rise in production levels could not adequately be met by adults and desperate parents struggling to survive and put food in their children’s mouths put them to work alongside them in the factories.

The Industrial Revolution, 1750-1914 option The learning sequence models an approach that encourages inquiry and provides a significant amount of source material for students to use. The goal is to ensure that students are able to explore the topic in some depth and are given the opportunity to deal with an appropriately complex range of detail and issues. The suggested assessment task that follows allows students to consolidate their learning and produce an extended response.

Isn’t it wonderful the internet came along to liven things up. Australian Curriculum.