What Exactly is a Food Truck? A food truck, mobile kitchen, mobile canteen, roach coach, gut truck, or catering truck is a mobile venue that transports and sells food. 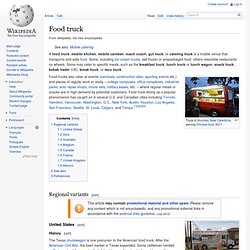 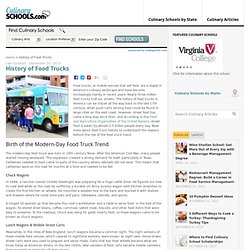 Nearly three million food trucks troll our streets. The history of food trucks in America can be traced all the way back to the late 17th century, when push carts serving food could be found in large cities on the east coast. However, street food has come a long way since then, and according to the Food and Agriculture Organization of the United Nations, street food is eaten by almost 2.5 billion people every day.

Read more about food truck history to understand the reasons behind the rise of the food truck trend. How America Became a Food Truck Nation. If you want to see what eating in Los Angeles is like, beyond the gold-plated Beverly Hills bistros and the bottle-service clubs that count the Kardashians among their clientele, you could do worse than to pull into a deserted parking lot late at night, check the coordinates on your iPhone and watch the stretch of asphalt fill with hundreds of hungry people. 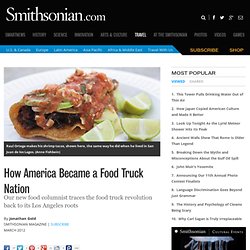 They, and probably you, have been summoned here by a Twitter blast from the Kogi truck, a retrofitted catering van serving Korean short-rib tacos, kimchi dogs and other edible symbols of L.A.’s famous cross-cultural inclusiveness, dripping plates of food drawn straight from the city’s recombinant DNA. In the city that gave birth to the celebrity chef, Kogi’s Roy Choi is the culinary star of the moment, with awards and an international renown usually reserved for those who command palaces of cuisine. Could the new-style trucks thrive in the land of the lonchera? Maybe if they found the right place to park. “I don’t move,’’ he said. LA Food Truck King Tells His Story, One Recipe At A Time : The Salt. Hide captionFive years ago, chef Roy Choi and a partner launched Kogi and ushered in a food truck "new wave" in Los Angeles. 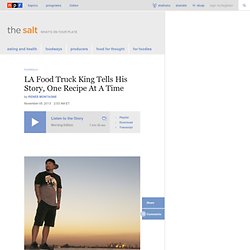 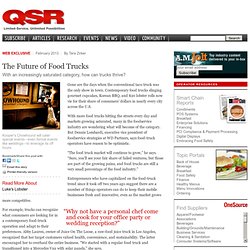 Kooper's Chowhound will cater special events—even formal events like weddings—to leverage its off hours. Gone are the days when the conventional taco truck was the only show in town. Contemporary food trucks slinging gourmet cupcakes, Korean BBQ, and $20 lobster rolls now vie for their share of consumers’ dollars in nearly every city across the U.S. With more food trucks hitting the streets every day and markets growing saturated, many in the foodservice industry are wondering what will become of the category. America's Best Food Truck Cities. Fun Facts and Trivia About The Food Truck Business. Food trucks have been around for decades. 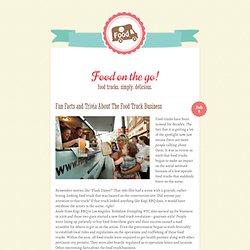 The fact that it is getting a lot of the spotlight now just means there are more people talking about them. It was as recent as 2008 that food trucks began to make an impact on the social network because of a few upscale food trucks that suddenly burst on the scene. Remember movies like “Flash Dance?” That 1983 film had a scene with a grayish, rather boring-looking food truck that was located on the construction site. Did anyone pay attention to that truck? Food Network: The Great Food Truck Race Videos. Facts about the Food Truck Industry. The Food Truck Industry is exploding all over the country with food from different ethnic backgrounds to the original burgers and fries, but did you know that to insure a truck to show off your food skills could cost nearly 160,000 per year? 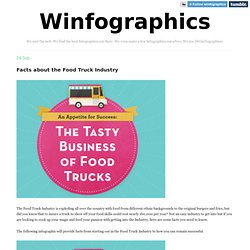 Not an easy industry to get into but if you are looking to cook up your magic and feed your passion with getting into the Industry, here are some facts you need to know. The following infographic will provide facts from starting out in the Food Truck Industry to how you can remain successful via: carinsurance.org. Popular Austin Food Trucks. Emerging Field: Food Trucks. There’s a reason ABC News called food trucks the “hottest new business venture.” 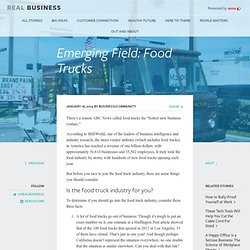 According to IBISWorld, one of the leaders of business intelligence and industry research, the street vendor industry (which includes food trucks) in America has reached a revenue of one billion dollars, with approximately 30,810 businesses and 35,502 employees. It truly took the food industry by storm, with hundreds of new food trucks opening each year. But before you race to join the food truck industry, there are some things you should consider. Gourmet Food Trucks- "Redefining Fast Food" Leland Morris: Food Trucks Are a Win-Win. By trying to balance the interests of various parties, the Washington, D.C. 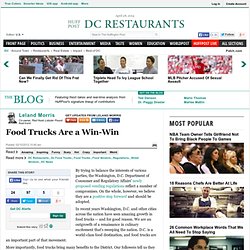 Department of Consumer and Regulatory Affairs' newly proposed vending regulations reflect a number of compromises. On the whole, however, we believe they are a positive step forward and should be adopted. In recent years Washington, D.C. and other cities across the nation have seen amazing growth in food trucks -- and for good reason. We are an outgrowth of a renaissance in culinary excitement that's sweeping the nation. Help Children's Hospitals. Ten Myths About Food Trucks. Opening a food truck isn’t like the movie Field of Dreams. 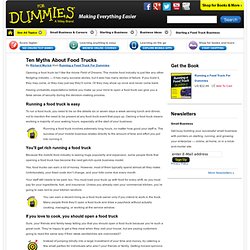 The mobile food industry is just like any other fledgling industry — it has many success stories, but it also has many stories of failure. If you build it, they may come, or they may just say they’ll come. US Food Truck Map. 5 Mobile Apps for Finding Food Trucks in Your Area. Unless you live under a rock (that is, a rock without cable TV), you've probably noticed the food truck phenomenon that has made meals on wheels chic and inspired several shows on the Food Network.

But while food trucks may be booming, stationary restaurants still have one distinct advantage: You know where to find them. When struck with a craving for tacos, it's easier to Google the Mexican restaurant down the street than to track down a Kogi Korean BBQ truck. All the Twitter posts in one place – Now Mobile! Find and map food trucks with the Roaming Hunger iPhone App.

The Cost Of Starting A Food Truck. In recent years, consumers have increasingly turned to mobile food trucks for breakfast, lunch, dinner and snacks in between. A industry survey by IBISWorld placed annual revenue from food trucks around $1.2 billion in 2009 and annual growth rates from 2007-2012 near 8.4% annually.

"Street Vendors in the US: Market Research Report" estimated that there are over 15,500 individuals who serve food to diners in open-air locations. Due to the continued growth in popularity, starting a food truck is a viable business opportunity. Food Trucks Continue to Rise in Popularity - On Your Plate. Just a few years ago an ice cream or taco truck was the only mobile food experience available, especially if you lived outside a metropolitan area. Today, food trucks are almost commonplace with a variety of creative cuisines for any palate.

The newest area of expansion is the cell phone lot at your airport. “The trend started with the Tampa International Airport, which began inviting food trucks to park at its lot in December 2012 during a curbside parking rule transition. America's Most Unique Food Trucks. Mobile eateries continues to be one of the hottest food trends in America. With an industry now saturated with every kind of food truck imaginable, U.S. News searched far and wide to find those they deemed to be the most unique and creative. Here are their finds for 2011. 1. Food Trucks: 25 Of The Coolest. The Ten Weirdest Food Trucks In The World. Considering that the Weinermobile does not serve food... this seems to be a contender. Why do I not have disposable income so I can hire these guys to come up to the San Gabriel Valley for my birthday!?!?!? The Red Hook Lobster Pound- #1 in America. 101 Best Food Trucks in America for 2013. 'Living Our Dream': Stockbroker Quits Job, Opens Food Truck.

When it comes to heat, Dan Salls is one chef who knows how to stand it in the kitchen. Salls quit his day job less than a year ago as a financial adviser to take his amateur cooking skills on the road and open The Salsa Truck, the first licensed mobile food preparer in Chicago. "When I left my job we were in my apartment every night with culinary textbooks," Salls said. Starting your own food truck. The Real Deal Behind Running A Food Truck Infographi. Is a Food Truck in Your Future? - CulinaryOne. The growth of the popularity of food trucks has been fast and furious since 2008. There are a number of reasons that have contributed to this amazing growth including the desire for local, artisan foods, the economy, and social media. No one can every fully understand what creates a trend — if they were predictable every new product that came on the market would be an overnight success. LIST OF 8: How To Run A Successful Food Truck.

Making money in the food truck industry is like re-creating your mom’s secret sauce. The Colorful And Tasty World Of Food Trucks – What You Need To Know About The Industry. Top 20 US Cities to Open a Food Truck. Ten Tips for Preventing Food Truck Failure. Local Marketing Tecniques for Food Trucks. 5 Innovative Food Truck Social Media Marketing Campaigns. Why Food Trucks Aren't Going Away.