Republican Legislators Push for Cities to Be Treated as "Tenants of the State" Right-wing corporate interests are pushing state legislatures to curtail the progressive power of city governments. 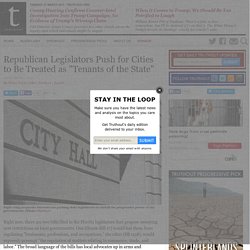 (Photo: Pixabay) Right now, there are two bills filed in the Florida legislature that propose sweeping new restrictions on local governments. One (House Bill 17) would bar them from regulating "businesses, professions, and occupations," the other (SB 1158), would expressly preempt "the regulation of matters relating to commerce, trade, and labor. " California Really Has What It Takes to Secede. With the election of Donald Trump and the backlash to some of his early moves in office, Americans are rediscovering nationalism. 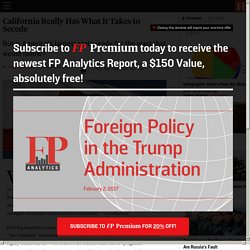 But confusion reigns over what American nationalism really is. Does it have to be federalist, for instance? Does it have to be liberal? ROAR Magazine. The mass protests across the United States in response to Donald Trump’s presidential election victory constitute a palpable and growing potential for the formation and constructive utilization of various anti-fascist fronts and coalitions. 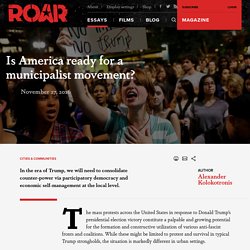 While these might be limited to protest and survival in typical Trump strongholds, the situation is markedly different in urban settings. In many cities, anti-Trump demonstrations have included far-left groups, immigration-rights advocates, Black Lives Matter activists, reproductive rights supporters and a number of other political actors. Amidst calls for “people power,” these different movements together chanted “not my president!”

And vocalized their support for so many other groups that have been marginalized, ridiculed and discriminated against by the president-elect. Beyond Distrust: How Americans View Their Government. Broad criticism, but positive performance ratings in many areas Overview A year ahead of the presidential election, the American public is deeply cynical about government, politics and the nation’s elected leaders in a way that has become quite familiar. 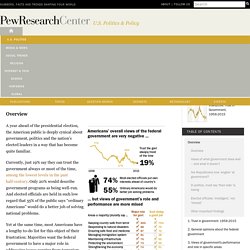 Currently, just 19% say they can trust the government always or most of the time, among the lowest levels in the past half-century. Only 20% would describe government programs as being well-run. And elected officials are held in such low regard that 55% of the public says “ordinary Americans” would do a better job of solving national problems. Yet at the same time, most Americans have a lengthy to-do list for this object of their frustration: Majorities want the federal government to have a major role in addressing issues ranging from terrorism and disaster response to education and the environment. Yet both Republicans and Democrats favor significant government involvement on an array of specific issues. Magazine / fall 2013. Last December, when Adam Lanza stormed into the Sandy Hook Elementary School in Newtown, Connecticut, with a rifle and killed twenty children and six adult staff members, the United States found itself immersed in debates about gun control. 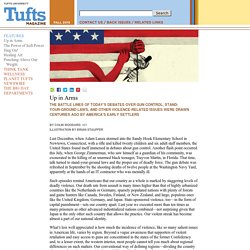 Another flash point occurred this July, when George Zimmerman, who saw himself as a guardian of his community, was exonerated in the killing of an unarmed black teenager, Trayvon Martin, in Florida. That time, talk turned to stand-your-ground laws and the proper use of deadly force. The gun debate was refreshed in September by the shooting deaths of twelve people at the Washington Navy Yard, apparently at the hands of an IT contractor who was mentally ill. Such episodes remind Americans that our country as a whole is marked by staggering levels of deadly violence. The US is a failed state thanks to its system of gov... In the wake of last year’s San Bernardino massacre, President Barack Obama begged the states to do something about gun control. 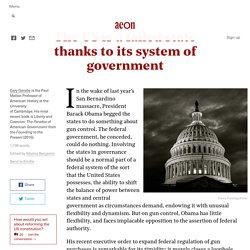 The federal government, he conceded, could do nothing. Involving the states in governance should be a normal part of a federal system of the sort that the United States possesses, the ability to shift the balance of power between states and central government as circumstances demand, endowing it with unusual flexibility and dynamism. But on gun control, Obama has little flexibility, and faces implacable opposition to the assertion of federal authority. Pro-Democracy Group Warns of Secret Right-Wing Push to Rewrite Constitution. Under the radar of corporate media and general public, a "dangerous proposal" is bubbling up in state legislatures throughout the country—one that could trigger "political chaos that would make past upheavals like the Watergate scandal and the impeachment trial of President Bill Clinton seem tame by comparison. 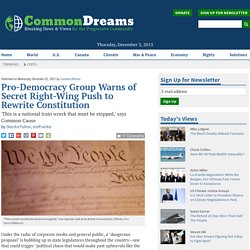 " "We're sounding an alarm. This is a national train wreck that must be stopped. "—Miles Rapoport, Common Cause. Dr. Paul on Secession. U.S. Responses to Self-Determination Movements: Strategies for Nonviolent Outcomes and Alternatives to Secession. Report from a Roundtable Held in Conjunction with the Policy Planning Staff of the U.S. 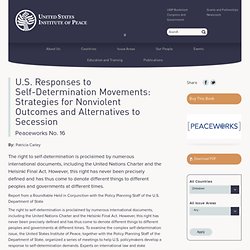 Department of State The right to self-determination is proclaimed by numerous international documents, including the United Nations Charter and the Helsinki Final Act. However, this right has never been precisely defined and has thus come to denote different things to different peoples and governments at different times. Texas v. White - 74 U.S. 700 (1868. How is America going to end? Who most likely to secede? In the American end times, our government will take one of two forms. 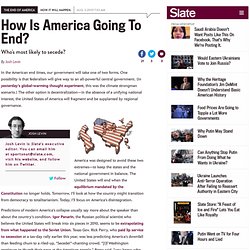 One possibility is that federalism will give way to an all-powerful central government. (In yesterday's global-warming thought experiment, this was the climate strongman scenario.) The other option is decentralization—in the absence of a unifying national interest, the United States of America will fragment and be supplanted by regional governance. America was designed to avoid these two extremes—to keep the states and the national government in balance. Imagine Breaking Up The United States. 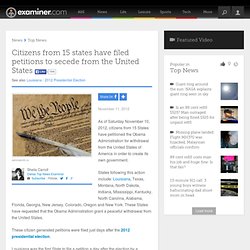 States following this action include: Louisiana, Texas, Montana, North Dakota, Indiana, Mississippi, Kentucky, North Carolina, Alabama, Florida, Georgia, New Jersey, Colorado, Oregon and New York. These States have requested that the Obama Administration grant a peaceful withdrawal from the United States. National Journal: "What if we redrew state boundaries?" The 'United' States? A house divided. Columbus, OH - In the wake of the 2004 presidential election, a satirical map of "red" and "blue" states became an instant online hit. On it you could find "Jesusland", or the states where George W Bush somehow convinced the populace that his part Calvin Coolidge, part Kardashian-marriage presidency deserved four more years (Mission Accomplished).

Meanwhile, mostly to the north of these states, "The United States of Canada", was born, where Senator John Kerry windsurfed his way to victory. The Second Wave: Return of the Militias. Secession: Getting It Right This Time Around by Jonathan M. Kolkey. By Jonathan M. Kolkey by Jonathan M. Kolkey Recently by Jonathan M. Kolkey: Did King George III Deserve To Be Overthrown? Dr. Jonathan David Farley: The Confederacy Must Be Destroyed. Terror From the Right: Plots, Conspiracies and Racist Rampages Since Oklahoma City. 2009 DHS Report on Rightwing Extremism. America's 2nd Revolutionary War. Richard Greener: Republican Politics: The Concurrent Majority and the Stink of Secession in the Air. Not since the glory days of our seventh vice president, South Carolina's John C.

Calhoun, has the stink of secession been as strong as it is today. I can smell it. Middlebury Institute. Divided We Stand Together -1/3. Zogby Secession Poll 2008. Middlebury Institute/Zogby Poll: One in Five Americans Believe States Have the Right to SecedeSurvey finds 18% would support a secessionist effort in their stateNews and Blog Coverage of Poll July 23, 2008 UTICA, New York – One in five American adults – 22% – believe that any state or region has the right to “peaceably secede from the United States and become an independent republic,” a new Middlebury Institute/Zogby International telephone poll shows. The level of support for the right of secession was consistent in every region in the country, though the percentage was slightly higher in the South (26%) and the East (24%).

The figures were also consistent for every age group, but backing was strongest among younger adults, as 40% among those age 18 to 24 and 24% among those age 25 to 34 agreed states and regions have secession rights. Liberal Exodus? (Blue State Secession With Poll) Rumblings on the Right Right now most members of the DKos community have most likely heard of the Christian conservative secession movement called Christian Exodus. Since Kos first talked about them on the main page they've settled on South Carolina as their focus point, showing the old saying is still true: "South Carolina is too small for a republic and too large for an insane asylum. " Sorry Alabama and Mississippi, you just weren't nutjob enough. Their goal is to create a Christian government in South Carolina, with secession as a final option if the national government blocks their attempts.

Christopher Ketcham: Vermont Revolutionaries and the Rise of a Green Tea Party. Cascadia Commons Benevolent Society. The Cascadian Independence Project. Cascadian Order of Self-Determination Archives. Push for constitutional convention gathers steam. Rising frustration with Washington and conservative electoral victories across much of the U.S. are feeding a movement in favor of something America hasn't done in 227 years: Hold a convention to rewrite the Constitution. Although it's still not likely to be successful, the effort is more serious than before: Already, more than two dozen states have called for a convention. Constitutional Convention movement growing in states. Call a Convention. The 99% Declaration - The 99% Declaration.

A New Declaration. Photo: www.bethanybond.com. Vermont first state to call for constitutional convention to get money out of politics. 1896: Reform or Revolution? A People's Constitution, by Howard Zinn. Occupy Wall Street Movement: Its Roots, Ideological Features, and Future. Our Invisible Revolution. These Americans Are Fighting for an Actual, Legitimate Democracy, By and For the People. From Global Justice Movement to the Occupy Wall Street Movement and Beyond.

Arab Uprisings: Heralds of a New Era of Social Revolutions in 21st Century? America: Republic or Democracy? By William P. ‘We the People’ Loses Appeal With People Around the World. Let’s Give Up on the Constitution. A Multimedia Introduction to the Communist Manifesto. What Makes a Revolution? A Practical Utopian’s Guide to the Coming Collapse. “We are in a revolutionary moment”: Chris Hedges explains why an uprising is coming — and soon.