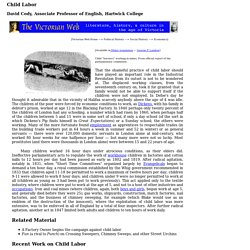 From official report of the parliamentary commision. That the shameful practice of child labor should have played an important role in the Industrial Revolution from its outset is not to be wondered at. The displaced working classes, from the seventeenth century on, took it for granted that a family would not be able to support itself if the children were not employed. In Defoe's day he thought it admirable that in the vicinity of Halifax scarcely anybody above the age of 4 was idle.

The children of the poor were forced by economic conditions to work, as Dickens, with his family in debtor's prison, worked at age 12 in the Blacking Factory. Many children worked 16 hour days under atrocious conditions, as their elders did. Related Material Recent Work on Child Labor Humphries, Jane. Created 1988. The Industrial Revolution and the changing face of Britain. An exhibition at the Barber Institute of Fine Arts (2008-9) 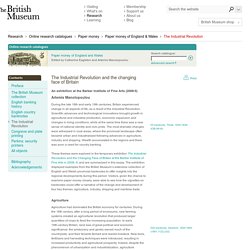 Economic Growth and the Early Industrial Revolution. This drawing depicts men working the lock on a section of the Erie Canal. 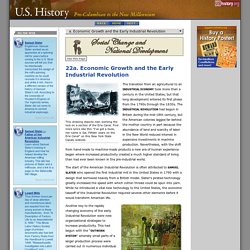 Find more lyrics like this "I've got a mule, her name is Sal, Fifteen years on the Erie Canal" on this New York State Canals website. The transition from an agricultural to an industrial economy took more than a century in the United States, but that long development entered its first phase from the 1790s through the 1830s. 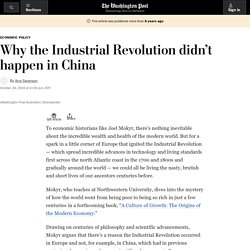 But for a spark in a little corner of Europe that ignited the Industrial Revolution — which spread incredible advances in technology and living standards first across the north Atlantic coast in the 1700 and 1800s and gradually around the world — we could all be living the nasty, brutish and short lives of our ancestors centuries before. Mokyr, who teaches at Northwestern University, dives into the mystery of how the world went from being poor to being so rich in just a few centuries in a forthcoming book, “A Culture of Growth: The Origins of the Modern Economy.” The Rise of Industry. WatchKnowLearn ratings are intentionally harsher than what you might find on YouTube, for example. 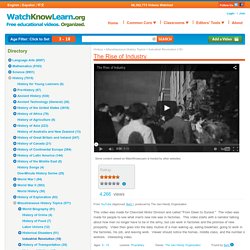 Most of our videos have been imported by people who want to use them with kids, not by the creators of the videos. We take a hard-nosed attitude toward quality. Four and five stars should be reserved for really excellent quality. Three stars isn't bad. Two is often watchable and shouldn't be ruled out. 5 stars = Exemplary. More help with rating. A Biography of America: The Rise of Capitalism. Freedom: A History of US. Webisode 4: Wake up, America. The opening of the nineteenth century saw innovations, inventions, and improvements in the old ways of doing things that allowed Americans more personal freedom. 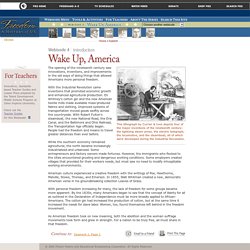 With the Industrial Revolution came inventions that promoted economic growth and enhanced agricultural production. Eli Whitney's cotton gin and the new American textile mills made available mass-produced fabrics and clothing. Improved systems of transportation moved goods swiftly across the countryside. Lesson: Industrial Revolution. The Industrial Revolution in part was fueled by the economic necessity of many women, single and married, to find waged work outside their home. 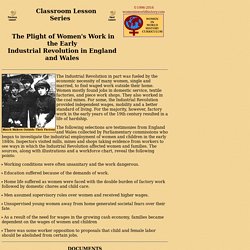 Women mostly found jobs in domestic service, textile factories, and piece work shops. They also worked in the coal mines. For some, the Industrial Revolution provided independent wages, mobility and a better standard of living. For the majority, however, factory work in the early years of the 19th century resulted in a life of hardship. The following selections are testimonies from England and Wales collected by Parliamentary commissions who began to investigate the industrial employment of women and children in the early 1840s. Coal, steam, and the Industrial Revolution. Industrial Revolution and the Standard of Living: The Concise Encyclopedia of Economics. 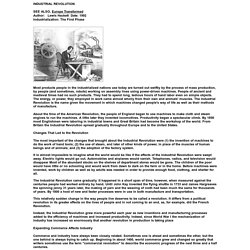 People of ancient and medieval times had no such products. Crime 1750-1900. Did the Industrial Revolution lead to more crime? 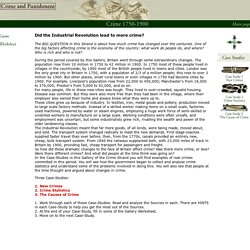 The BIG QUESTION in this Strand is about how much crime has changed over the centuries. One of the big factors affecting crime is the economy of the country: what work do people do, and where? Coal and the Industrial Revolution. As of 1860, the United States was an industrial laggard. 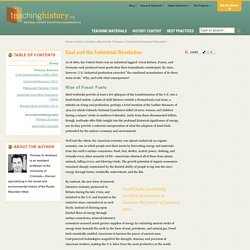 Great Britain, France, and Germany each produced more goods than their transatlantic counterpart. By 1900, however, U.S. industrial production exceeded "the combined manufacture of its three main rivals. " Why, and with what consequences? The Industrial Revolution in the United States - Primary Source Set. Industrial Revolution Exclusive Videos & Features. You're almost done!

You will soon receive an activation email. Once you click on the link, you will be added to our list. If you do not receive this email, please contact us. To ensure delivery to your inbox, add us to your address book. Oops, there's a problem. This email address has previously opted out from receiving any emails from HISTORY and/or A+E Networks. Childhood Lost - Child Labor During the Industrial Revolution. Childhood Lost: Child Labor During the Industrial Revolution Introduction | Primary Sources and Analysis Tools Library of Congress Resources | Primary Source Set Choose a link below to access printable PDF versions of these materials including additional information, color images and citations.Childhood Lost:Child Labor During the Industrial Revolution Resource Booklet | Primary Source Set Introduction.

The Industrial Revolution. Fossil Fuels, Steam Power, and the Rise of Manufacturing Abundant fossil fuels, and the innovative machines they powered, launched an era of accelerated change that continues to transform human society. Smokestacks in Pittsburgh, Pennsylvania, 1890s © Bettmann/CORBISThe Transformation of the World Try to imagine what your life would be like without any machines working for you. Make a list of the machines in your household and on your person; you may arrive at a surprising number. Now imagine earlier generations during their childhood years. Women and the Early Industrial Revolution in the United States.