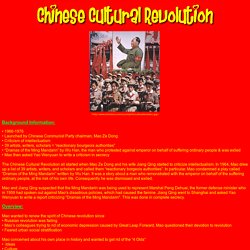 In 1964, Mao drew up a list of 39 artists, writers, and scholars and called them “reactionary borgeois authorities”. In particular, Mao condemned a play called “Dramas of the Ming Mandarin” written by Wu Han. It was a story about a man who remonstrated with the emperor on behalf of the suffering ordinary people, at the risk of his own life. Overview: Treaty ports in China. China -- the cake of kings and... of emperors" (a French pun on king cake and kings and emperors wishing to "consume" China). 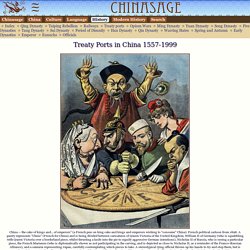 French political cartoon from 1898. A pastry represents "Chine" (French for China) and is being divided between caricatures of Queen Victoria of the United Kingdom, William II of Germany (who is squabbling with Queen Victoria over a borderland piece, whilst thrusting a knife into the pie to signify aggressive German intentions), Nicholas II of Russia, who is eyeing a particular piece, the French Marianne (who is diplomatically shown as not participating in the carving, and is depicted as close to Nicholas II, as a reminder of the Franco-Russian Alliance), and a samurai representing Japan, carefully contemplating which pieces to take. A stereotypical Qing official throws up his hands to try and stop them, but is powerless. Treaty ports, Concessions and Enclaves. China 1911 90 Waugh. Communists, Nationalists, and China's Revolutions: Crash Course World History #37.

CHINA- JOHNdCLARE. Chinese Revolution. A photograph of a Chinese family, all apparently smoking opium Today the People’s Republic of China is one of the most powerful nations on Earth. 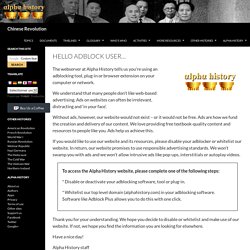 It boasts more than a billion people, a diverse economy producing in excess of $US8 trillion each year, considerable technological prowess and innovation, and the most imposing military force in Asia. Maos-china-1930-76 - Ben walsh. The Chinese Revolution of 1949 - 1945–1952.

Oops! - ABC Radio. Mao's Great Famine HDTV great leap foward, history of china. Chairman Mao Documentary - The Cultural Revolution - Destruction Of China. Part 13: The Republic of China [ 1912-1949 ] If the second half of the 19th century was bad, the first half of 20th would be worse. 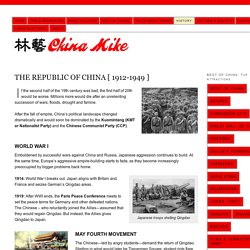 Millions more would die after an unrelenting succession of wars, floods, drought and famine. After the fall of empire, China’s political landscape changed dramatically and would soon be dominated by the Kuomintang (KMT or Nationalist Party) and the Chinese Communist Party (CCP). Emboldened by successful wars against China and Russia, Japanese aggression continues to build. At the same time, Europe’s aggressive empire-building starts to fade, as they become increasingly preoccupied by bigger problems back home. Japanese troops shelling Qingdao 1914: World War I breaks out. 1919: After WWI ends, the Paris Peace Conference meets to set the peace terms for Germany and other defeated nations. The Chinese—led by angry students—demand the return of Qingdao. Mao Zedong: "Revolution is not a dinner party. " Shanghai got a big boost by the Taiping Rebellion. 1928: Chiang Kai-shek’s KMT forces take Beijing. 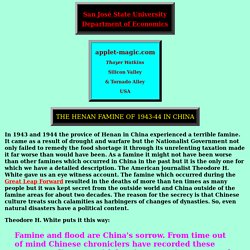 It came as a result of drought and warfare but the Nationalist Government not only failed to remedy the food shortage it through its unrelenting taxation made it far worse than would have been. As a famine it might not have been worse than other famines which occurred in China in the past but it is the only one for which we have a detailed description. The American journalist Theodore H. White gave us an eye witness account. 12 h henan Famine 1943 4. Mao's Bloody Revolution. Political, Social, Cultural, Historical Analysis Of China. Re-organization of the CCP Central Organization Department Transplant Of The Purge of Trotskyists Gao Hua stated that Mao Tse-tung came to like Wang Ming's talk of "purging Trotskyites" when Wang Ming objected to Chen Duxiu's return to the CCP as well as accused Zhang Wentian of being influenced by Trotsky while in Moscow. 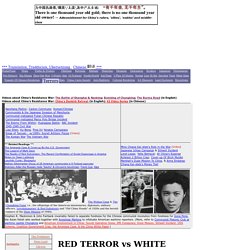 From 1938 onward, per GH, Mao never forgot to curse the "Japanese imperialists, Trotskyites and traitors" in his lumpsome speeches. While Wang Ming was orally fighting the Trotskyites, Mao Tse-tung authorized Kang Sheng in secretively investigating and arresting the "Trotskyite suspects" among the new influx of people to Yan'an. Gao Hua listed three categories of people handled by Kang Sheng: 1) Those Chinese who were suspected to be members of the Chinese Trotskyite organizations; 2) Those who had studies in the USSR; and 3) Those officers who were subordinate to Zhang Guotao's Western Route Red Army.