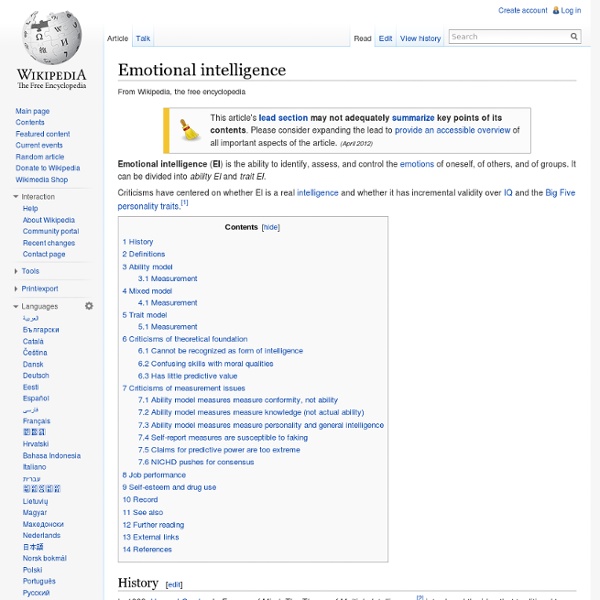 Emotional intelligence (EI) can be defined as the ability to monitor one's own and other people's emotions, to discriminate between different emotions and label them appropriately, and to use emotional information to guide thinking and behavior.[1] There are three models of EI. The ability model, developed by Peter Salovey and John Mayer, focuses on the individual's ability to process emotional information and use it to navigate the social environment.[2] The trait model as developed by Konstantin Vasily Petrides, "encompasses behavioral dispositions and self perceived abilities and is measured through self report" [3] The final model, the mixed model is a combination of both ability and trait EI, focusing on EI being an array of skills and characteristics that drive leadership performance, as proposed by Daniel Goleman.[4] It has been argued that EI is either just as important as one's intelligence quotient (IQ). History[edit] Definitions[edit] Ability model[edit] Measurement[edit]

Woodworth Psychoneurotic Inventory This is a interactive version of the Woodworth Psychoneurotic Inventory. Introduction "While the great World War exacted a frightful toll of death, destruction, and chaos, it yet served as a means of enriching the sum total of the world's store of knowledge. Industries worked at top speed, there was no slacking, the United States Government had little sympathy with procrastination. Men were being killed, land was being laid waste, and minds and bodies were being deteriorated under the strain.

Designing conference posters » Colin Purrington A large-format poster is a big piece of paper or wall-mounted monitor featuring a short title, an introduction to your burning question, an overview of your novel experimental approach, your amazing results in graphical form, some insightful discussion of aforementioned results, a listing of previously published articles that are important to your research, and some brief acknowledgement of the tremendous assistance and financial support conned from others — if all text is kept to a minimum (less than a 1000 words), a person could fully read your poster in 5-10 minutes. Section content • DOs and DON’Ts • Adding pieces of flair • Presenting • Motivational advice • Software • Templates • Printing • Useful literature • Organizing a poster session What to put in each section Below, I’ve provided rough tips on how many words each of these sections might have, but those guesses are assuming you have a horizontal poster that is approximately 3×4′. Adjust accordingly.

The coalition of No It's easy to join. There are a million reasons to say no, but few reasons to stand up and say yes. No requires just one objection, one defensible reason to avoid change. No has many allies--anyone who fears the future or stands to benefit from the status quo. And no is easy to say, because you actually don't even need a reason. No is an easy way to grab power, because with yes comes responsibility, but no is the easy way to block action, to exert the privilege of your position to slow things down. Practicing Certain Poses Creates a Sense of Power When suiting up with that “power tie,” you may also want to strike a pose – a power pose, that is. New research indicates that holding a pose that opens up a person's body and takes up space will alter hormone levels and make the person feel more powerful and more willing to take risks. "These poses actually make you more powerful," said study researcher Amy C.J. Cuddy, a social psychologist at the Harvard Business School.

Narcissistic Personality Inventory: Narcissism Test This is a interactive version of the Narcissistic Personality Inventory. Introduction Narcissism in personality trait generally conceived of as excessive self love. In Greek mythology Narcissus was a man who fell in love with his reflection in a pool of water. The NPI was developed by Raskin and Hall (1979) for the measurement of narcissism as a personality trait in social psychological research. It is based on the definition of narcissistic personality disorder found in the DSM-III, but is not a diagnostic tool for NPD and instead measures subclinical or normal expressions of narcissism. The sketchnote revolution « Dachis Group Collaboratory I’ve got an idea for a new year’s resolution: Join the sketchnote revolution. Sketchnotes are a visual form of note-taking that can include drawings, various lettering sizes and styles, color, icons, arrows, boxes and more — whatever works for you. I’d say that sketchnoting is officially a movement — maybe you’ve seen some from SXSWi or other conferences.

Positive Attitude: 6 Ways to Become More Optimistic Some people see the world through a filter of optimism: They always make lemonade from the lemons, no matter what happens. Others see the world through a filter of pessimism; they always find the cloud in the silver lining. It's a truism of life that the optimists are always more successful than the pessimists, but that raises a crucial questions: how can you change your attitude to be more optimistic? Power Posing: Fake It Until You Make It We can't be the alpha dog all of the time. Whatever our personality, most of us experience varying degrees of feeling in charge. Some situations take us down a notch while others build us up.