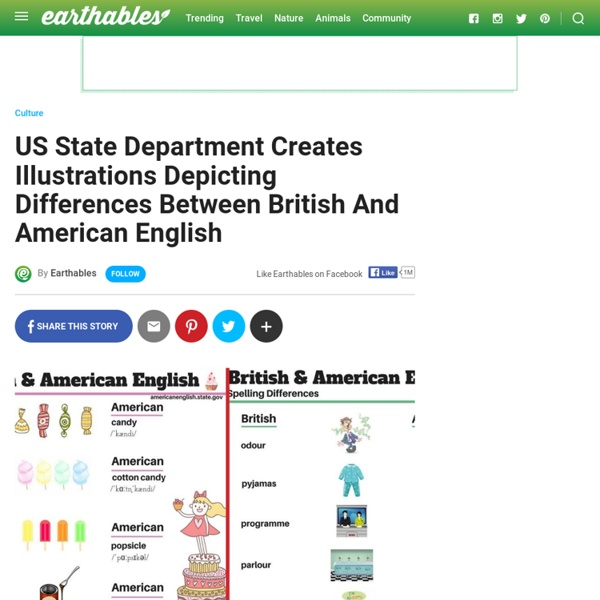 People in America and the UK both speak English, and while most words remain the same there are a few differences that could potentially create a misunderstanding. To help English speakers from all over the world better communicate, the US State Department created these useful illustrations that highlight key differences between British and American English. English originated as early as the mid-5th century, and has since been brought to a number of countries. Over the years many changes and adaptations have taken place, creating unique discrepancies in the English language all around the world. Here are some of the main differences between British and American English, we bet you find at least a few that truly surprise you! 1. americanenglish.state.gov 2. 3. 4. 5. 6. 7. 8. 9. 10. 11. 12. 13. 14.

Does grammar matter? - Andreea S. Calude Spoken language has been neglected and marginalized for much of our history on account of its perceived inferiority in comparison to written language. Written language was historically regarded as the language of the ‘learned,’ given that few people could read or write. It also had permanence (written records can be preserved for hundreds of years, and it is only recently that speech recordings became an achievable technology for most of us), and it was thought to be of a higher standard and quality (often summed up as having “better” or more “correct” grammar).

The Origin of Just About Everything, Visualized The world is full of simple questions that have complicated answers. For example: What is the universe made of? Why do we have wax in our ears? And where exactly does belly button lint come from? “There are so many great scientific origin stories out there,” says Graham Lawton, features editor at New Scientist. The 50 most important English proverbs The 50 most important English proverbs What are proverbs? Every culture has a collection of wise sayings that offer advice about how to live your life. These sayings are called "proverbs". How can you use proverbs to learn English? It's good to know the really common English proverbs because you hear them come up in conversation all the time.

The Best Funny Videos To Help Teach Grammar – Help Me Find More Earlier today, I posted Weird Al Weird Al Yankovic’s new funny video teaching grammar (I’ve also posted it below). Then, Heather Wolpert-Gawron showed me another funny one, that’s also posted below. I figured there have got to be more out there, so I invite readers to contribute the ones you know about — I’ll post them here and, of course, give you full credit. These can certainly be useful in the classroom! Chana at GCFLearnFree shared their fun and corny videos that are probably more categorized as easily confused words than grammar-related, but I’m still adding the series to this list. You can see them all here.

Which languages rule the internet? Google recognises the most languages, across its Translate and Search services – with 348 languages supported on Google Search. The following infographic from Statista explores how some of the world’s biggest websites deal with the globe’s linguistic diversity. Source: Statista In terms of social media websites, Facebook recognises the most languages – some 120 in 2015. These include Afrikaans, Albanian and Azerbaijani through to Turkish and Vietnamese. Next is Twitter, with 48 languages in 2015, while LinkedIn only supports 24 languages – just 0.3% of the world’s total.

How to Learn English Words Learn English words quickly and easily with these tips and resources. We all know we must learn English words—and lots of them—to speak the language well. A native English speaker knows approximately 12,000 to 20,000 words according to experts. Mother tongue English speakers learn these words over a lifetime of informal daily life and in formal schooling. There are anywhere from 450,000 to one million English words depending on whether you count words separately (e.g., sit, sitting, sat, sitter) or as part of a word family (e.g., sit). We also learn words as part of idiomatic phrases (a set group of words that together have a meaning that's different than the separate words. e.g, sitting on top of the world). untitled VENEZUELANS are famously inventive with words. After 17 years of chavismo, the left-wing ideology of the late president, Hugo Chávez, they have plenty of material. Insults aimed at his “Bolivarian revolution” abound; the regime, now led by Nicolás Maduro, hurls its own ammunition. With parliamentary elections due on December 6th, The Economist offers a sample. Bachaquero.