Andrew Stanton: The clues to a great story 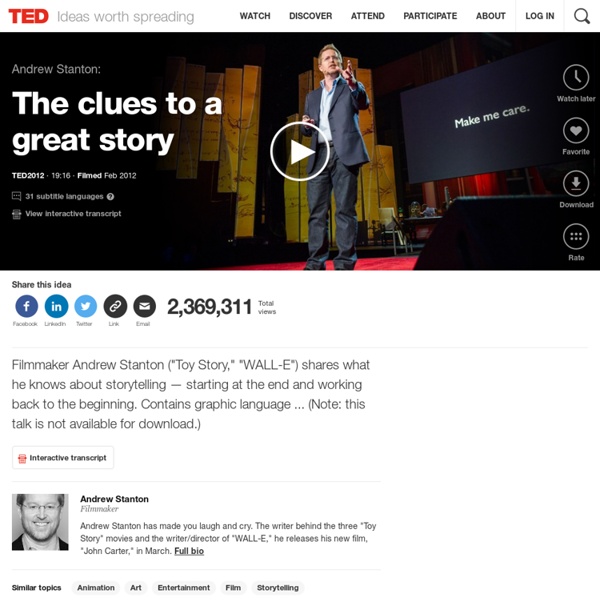 Six Famous Thought Experiments, Animated in 60 Seconds Each By Maria Popova From the fine folks at the Open University comes 60-Second Adventures in Thought, a fascinating and delightfully animated series exploring six famous thought experiments. The Paradox of the Tortoise and Achilles comes from Ancient Greece and explores motion as an illusion: The Grandfather Paradox grapples with time travel: Chinese Room comes from the work of John Searle, originally published in 1980, and deals with artificial intelligence: Hilbert’s paradox of the Grand Hotel, proposed by German mathematician David Hilbert, tackles the gargantuan issue of infinity: The Twin Paradox, first explained by Paul Langevin in 1911, examines special relativity: Schrödinger’s Cat, devised by Austrian physicist Erwin Schrödinger in 1935, is a quantum mechanics mind-bender: For more such fascination and cognitive calisthenics, you won’t go wrong with Peg Tittle’s What If….Collected Thought Experiments in Philosophy . via Open Culture

Non-Fiction Writing General Non-Fiction Ideas / Resources: Activity Clues - A fun writing task which requires children to think of clues related to particular activities. Write to Santa! - Send a letter to Santa at Christmas, and receive a reply too! Describing Yourself - A game, useful for the beginning of term, which helps you and the children get to know each other. Persuasive Writing / Adverts: Persuasive Words and Phrases - A selection of words and phrases which children can use within their own persuasive writing. Discussion: Discursive Writing - A discursive text (in PDF) with a framework. Explanations: Postcards - A fantastic way for the children to tell you about their holidays, encouraging independent writing without intimidating them.

197 Educational YouTube Channels You Should Know About - InformED : Free Visual Dictionary & Thesaurus | Online Dictionary | Associated Words | Synonyms Dictionary at SnappyWords.com Politics and the English Language Cover of the Penguin edition "Politics and the English Language" (1946) is an essay by George Orwell that criticised the "ugly and inaccurate" written English of his time and examines the connection between political orthodoxies and the debasement of language. The essay focuses on political language, which, according to Orwell, "is designed to make lies sound truthful and murder respectable, and to give an appearance of solidity to pure wind". Summary[edit] Orwell relates what he believes to be a close association between bad prose and oppressive ideology: In our time, political speech and writing are largely the defence of the indefensible. One of Orwell's points is: The great enemy of clear language is insincerity. The insincerity of the writer perpetuates the decline of the language as people (particularly politicians, Orwell later notes) attempt to disguise their intentions behind euphemisms and convoluted phrasing. Orwell discusses "pretentious diction" and "meaningless words".

Future: Writing Styles and Forms Writing Styles and Forms Writing in Context provides you with the opportunity to explore a variety of writing styles. In approaching the task, you are to write in an expository, persuasive and imaginative style. Within each style of writing there is a wide range of forms. This page explains the three different styles and different forms of writing (each with explanatory links). Overview Persuasive texts Sets out to argue and prove a case Aims to convince targeted audience of the validity of a viewpoint on an issue by presenting logical argument Presents ideas that follow in logical progression Anticipates and answers possible objections or opposing arguments Presents well researched evidence to support the case Provides facts from reputable authorities and research to prove, or disapprove, a position Written with precision and authority Expository texts The intention is to explain, describe or interpret a situation, issue or event. Imaginative texts back to top back to top