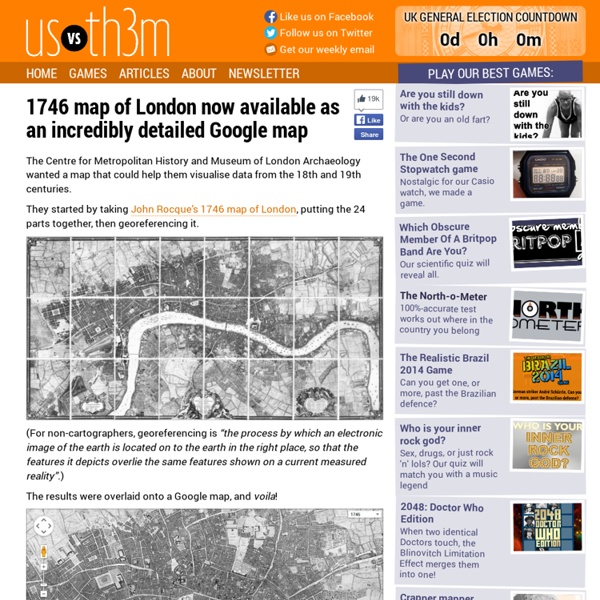 The Centre for Metropolitan History and Museum of London Archaeology wanted a map that could help them visualise data from the 18th and 19th centuries. They started by taking John Rocque’s 1746 map of London, putting the 24 parts together, then georeferencing it. (For non-cartographers, georeferencing is “the process by which an electronic image of the earth is located on to the earth in the right place, so that the features it depicts overlie the same features shown on a current measured reality”.) The results were overlaid onto a Google map, and voila! You can travel through London as it was in 1746, and, as a added bonus, see the differences between then and now by moving the StreetView icon around. Example: in 1746, Southwark was mainly a giant field, but look at all the blue lines on top of it! The map is incredibly detailed — you can zoom in anywhere — and there are dozens of boats on the Thames, which is nice. Related:  Regency England • Industrial Revolution • Interesting

Historical and Regency Romance UK Spinning wheel History[edit] The earliest clear illustrations of the spinning wheel come from Baghdad (drawn in 1234),[2] China (c. 1270) and Europe (c. 1280), and there is evidence that spinning wheels had already come into use in both China and the Islamic world during the eleventh century.[3] According to Irfan Habib, the spinning wheel was introduced into India from Iran in the thirteenth century.[3] In France the spindle and distaff were not displaced until the mid 18th century.[4] According to Mark Elvin, 14th-century Chinese technical manuals describe an automatic water-powered spinning wheel. Comparable devices were not developed in Europe until the 18th century. In general, the spinning technology was known for a long time before being adopted by the majority of people, thus making it hard to fix dates of the improvements. Types of spinning wheels[edit] Charkha[edit] A lady yarning in a Charkha in MG Road Boulevard, Bangalore Modified and portable compact Charkha Great wheel[edit] Double drive[edit]

lapse: Landsat Satellite Images of Climate Change, via Google Earth Engine TIME and Space | By Jeffrey Kluger Editors note:On Nov. 29, 2016, Google released a major update expanding the data from 2012 to 2016. Read about the update here. Spacecraft and telescopes are not built by people interested in what’s going on at home. Rockets fly in one direction: up. That changed when NASA created the Landsat program, a series of satellites that would perpetually orbit our planet, looking not out but down. Over here is Dubai, growing from sparse desert metropolis to modern, sprawling megalopolis. It took the folks at Google to upgrade these choppy visual sequences from crude flip-book quality to true video footage. These Timelapse pictures tell the pretty and not-so-pretty story of a finite planet and how its residents are treating it — razing even as we build, destroying even as we preserve. Chapter 1: Satellite Story | By Jeffrey Kluger It’s a safe bet that few people who have grown up in the Google era have ever heard of Stewart Udall. 1 of 20 1 of 14 Full Screen 1 of 13

New York Public Library Puts 20,000 Hi-Res Maps Online & Makes Them Free to Download and Use When I was a kid, my father brought home from I know not where an enormous collection of National Geographic magazines spanning the years 1917 to 1985. I found, tucked in almost every issue, one of the magazine’s gorgeous maps—of the Moon, St. Petersburg, the Himalayas, Eastern Europe’s ever-shifting boundaries. I became a cartography enthusiast and geographical sponge, poring over them for years just for the sheer enjoyment of it, a pleasure that remains with me today. The Lionel Pincus & Princess Firyal Map Division is very proud to announce the release of more than 20,000 cartographic works as high resolution downloads. What does this mean? Can you—as I did with my neatly folded, yellowing archive—have all the maps in full-color print? This, explains the NYPL, “is the process where digital images of maps are stretched, placing the maps themselves into their geographic context, rendered either on the website or with tools such as Google Earth.” Related Content:

Dressing a Regency Woman | Philippa Jane Keyworth This blog post aims to give you a brief outline of how a Regency woman would be dressed. The thing is, so many authors assume their readers know what a spencer jacket is, what a shift is, what stays are, and if you don’t you feel rather silly asking! I myself will admit, for the first time ever, that I didn’t know what a pelisse was for about the first six years of reading Georgette Heyer novels! So for all you people interested in Regency tidbits, hopefully this will provide you with a basic and simple guide to Regency women’s items of clothing and roughly what order they went on! This was a thin down that does the equivalent of a modern day vest and slip all in one. It went on nearest to the skin and usually had capped sleeves which would have been hidden under the puff sleeves of the dress the lady would put on later. A pair of short stays – these gave that wonderful shelf-like effect for the bosoms… Then came the stays. A dress with straps that goes over the shift and stays. Like this:

Weaving A plain weave: image of warp and weft A satin weave, common for silk, each warp thread floats over 16 weft threads. Cloth is usually woven on a loom, a device that holds the warp threads in place while filling threads are woven through them. A fabric band which meets this definition of cloth (warp threads with a weft thread winding between) can also be made using other methods, including tablet weaving, back-strap, or other techniques without looms.[3] The way the warp and filling threads interlace with each other is called the weave. The majority of woven products are created with one of three basic weaves: plain weave, satin weave, or twill.[4] Woven cloth can be plain (in one colour or a simple pattern), or can be woven in decorative or artistic designs. Process and terminology[edit] An Indian weaver preparing his warp on a pegged loom (another type of hand loom) Weaving can be summarized as a repetition of these three actions, also called the primary motion of the loom. History[edit]