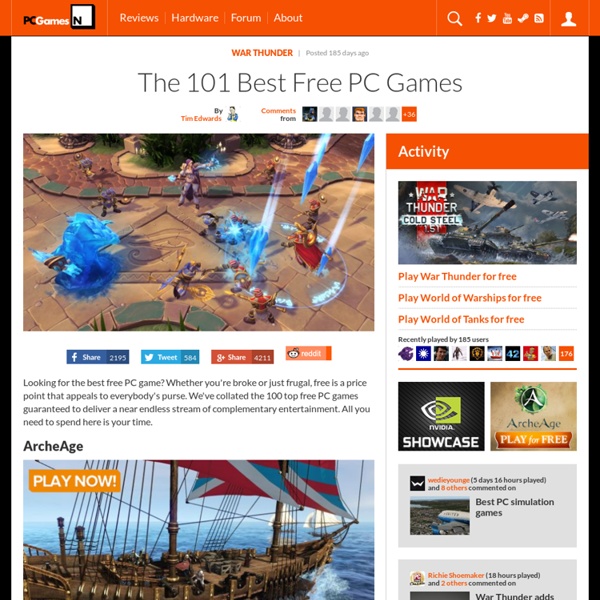 Looking for the best free PC game? Whether you're broke or just frugal, free is a price point that appeals to everybody's purse. We've collated the 100 top free PC games guaranteed to deliver a near endless stream of complementary entertainment. All you need to spend here is your time. ArcheAge Archeage is closest thing we’ve got to a proper pirate MMO. World of Warships World of Warships is now in open beta - launching September 17th. Rift Rift was a phenomenal subscription based fantasy MMO - World of Warcraft in new trousers, essentially. World of Tanks One of mightiest free-to-play games there has ever been, World of Tanks is an accessible and exciting tank simulator that hides some complex game mechanics. War Thunder A massively multiplayer World War 2 combat game that effortlessly encompasses all of the explosions and excitement that tanks and planes are capable of generating. Skyforge Nosgoth Smite Warframe Everything’s better in space, as Warframe proves with its Ninjas in space theme.

Psychology of Color [Infographic] Perhaps no choice is as vital to marketing as color. Whether you are selecting the color for a product or for your email marketing campaign, color has tremendous impact on all of us. Subconsciously, we associate different colors with different things. This infographic examines the psychology of color and looks at some common associations of different colors. Digital Games for Physical, Cognitive and Behavioral Health By: Alvaro Fernandez The Robert Wood John­son Foun­da­tion (RWJF) just announced more than $1.85 mil­lion in grants for research teams to study how dig­i­tal games can improve play­ers’ health behav­iors and out­comes (both brain-based and behavioral). The press release: Nine Lead­ing Research Teams Selected to Study How Dig­i­tal Games Improve Play­ers’ Health “Dig­i­tal games are inter­ac­tive and expe­ri­en­tial, and so they can engage peo­ple in pow­er­ful ways to enhance learn­ing and health behav­ior change, espe­cially when they are designed on the basis of well-researched strate­gies,” said (UC Santa Barbara’s Dr. Debra) Lieberman.

How To Make A Rocket That Can Shoot 700 Metres Using Sugar And Kitty Litter A video demonstrates how to make hobby rocket “sugar motors” using sugar, kitty litter, and repurposed household items. According to Grant Thompson from "The King of Random" Youtube channel, the rocket costs $0.50 to make and shoots nearly 700 meters (2,300 feet) into the air. “Sugar rockets are the slowest burning of all rocket fuels, and it's highly unlikely that PVC will explode when using kitty litter plugs and sugar for the propellent,” says Thompson. Download Gloriana In the mid 16th century a great queen was bestowed on the throne of England. Elizabeth 1st has taken the path, which made her kingdom one of the strongest empires the world has ever seen. And now you can travel back in time, where with adventurous spirit you can gain glory and wealth for yourself, as well as help build an empire. You come from a poor background, but have succeeded in becoming a small time merchant, based in the port of London. Now it’s time to make a successful career.

Strategy Games The kingdom is under attack! Defend your realm against hordes of orcs, trolls, evil wizards and other nasty fiends; armed with a mighty arsenal of warriors and mages of your own! Fight on forests, mountains, and wastelands. Upgrade your towers with special powers, rain fire upon your enemies, summon additional troops, recruit elven warriors and face legendary monsters. Earn up to 51 achievements and much more in this epic fantasy defense game by Ironhide Game Studio. Test Your Brain With Brain Teasers and Games Here you can enjoy the Top 25 Brain Teasers, Games & Illusions that SharpBrains readers (primarily adults, but some younger minds too) have enjoyed the most. It is always good to learn more about our brains and to exercise them!. Fun experiments on how our brains and minds work

These 2-sentence Horror Stories Will Chill You to the Bone in No Time at All. Enjoy... Here are a few tales that will take you from zero to spooked in 5 seconds flat… Via: Fuzzy Dave, Whole of the Internet Pokémon: The Missingno Tracks This OverClocked ReMix album is freely available online and is not being distributed for profit.All images and original compositions from Pokémon are copyright their original owners.Arrangements are available under the OverClocked ReMix Content Policy terms of use.

Multigame Template v2 more games By clicking the Download button and installing from Freega.me, you agree to abide by the End User License Agreement and Privacy Policy. DownloadAdminTM will manage your installation; optional third-party software may be shown via opt-in ads during the installation process. Learn more about our advertisers here. You can uninstall all games by following these instructions. Virtual Families Mono for Unreal Engine Earlier this year, both Epic Games and CryTech made their Unreal Engine and CryEngine available under an affordable subscription model. These are both very sophisticated game engines that power some high end and popular games. We had previously helped Unity bring Mono as the scripting language used in their engine and we now had a chance to do this over again. Today I am happy to introduce Mono for Unreal Engine.

Maxistentialism “Werewolf is a simple game for a large group of people (seven or more.) It requires no equipment besides some bits of paper; you can play it just sitting in a circle. I’d call it a party game, except that it’s a game of accusations, lying, bluffing, second-guessing, assassination, and mob hysteria.” – Andrew Plotkin, creator of Werewolf Werewolf is based on the game Mafia, which was created in 1986 by Dimitry Davidoff, a psychology student in the USSR. In 1997 Andrew Plotkin added the Werewolf theme and documented the rules. Werewolf has gone on to become a staple of tech conferences and gaming conventions, and many players, including myself, consider it to be one of the most difficult and elegant games ever created.