How Y’all, Youse and You Guys Talk - Interactive Graphic 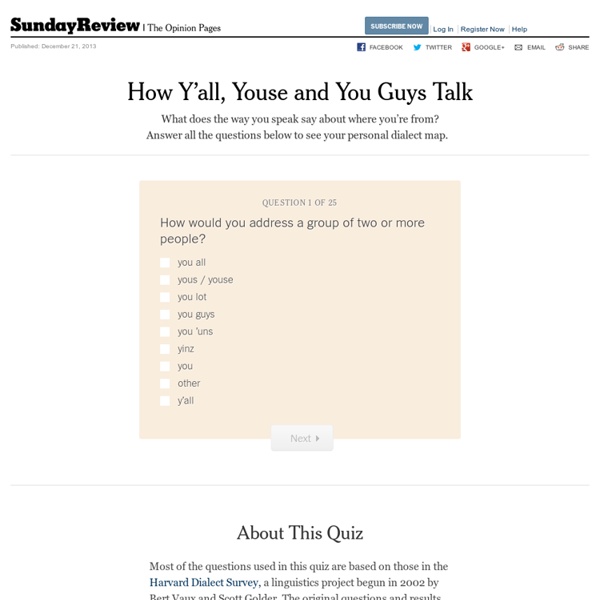 About This Quiz Most of the questions used in this quiz are based on those in the Harvard Dialect Survey, a linguistics project begun in 2002 by Bert Vaux and Scott Golder. The original questions and results for that survey can be found on Dr. Vaux's current website. The data for the quiz and maps shown here come from over 350,000 survey responses collected from August to October 2013 by Josh Katz, a graphics editor for the New York Times who developed this quiz. The colors on the large heat map correspond to the probability that a randomly selected person in that location would respond to a randomly selected survey question the same way that you did.

A Summary of Korean Terminology for TaeKwonDo Introduction This document is an attempt to compile a list of Korean terminology used in the study of TaeKwonDo. In years past, the terminology reflected heavy Chinese influence. Around 1975 however, most styles "upgraded" to use a more "modern" Korean terminology that attempts to shed these other influences in an effort to be more "pure" Korean. Wherever possible, I have tried to use this "new" (more modern) terminology. Since the Korean language is written using "Hangul" and not the Roman alphabet, all the spellings you see here are approximate romanizations and may not be the same spellings that some of you are used to seeing.

23 maps and charts on language by Dylan Matthews on April 15, 2015 "The limits of my language," the philosopher Ludwig Wittgenstein once posited, "mean the limits of my world." Explaining everything within the limits of the world is probably too ambitious a goal for a list like this. But here are 23 maps and charts that can hopefully illuminate small aspects of how we manage to communicate with one another. The basics Indo-European language rootsMinna Sundberg, a Finnish-Swedish comic artist, created this beautiful tree to illustrate both the relationships between European and central Asian languages generally, as well as a smaller but still striking point: Finnish has less in common with, say, Swedish than Persian or Hindi do.

How Language Seems To Shape One's View Of The World "It's on the left," he says. "No, it's southeast of here," she says. iStockphoto hide caption itoggle caption iStockphoto "It's on the left," he says. untitled VENEZUELANS are famously inventive with words. After 17 years of chavismo, the left-wing ideology of the late president, Hugo Chávez, they have plenty of material. Insults aimed at his “Bolivarian revolution” abound; the regime, now led by Nicolás Maduro, hurls its own ammunition. With parliamentary elections due on December 6th, The Economist offers a sample. Bachaquero. Derived from “bachaco”, a voracious large-bottomed leaf-cutter ant.

DropSmack: Using Dropbox to steal files and deliver malware I use Dropbox, and so do some 50 million other people. That's remarkable, considering Dropbox suffered through a few embarrassing speed bumps related to user file security. It seems it's going to take more than those kind of oops for us to consider giving up the convenience afforded by Dropbox. A digital addiction like that begs the question: what kind of "issue" would it take to convince someone (me for instance) to stop using Dropbox? When I asked that question at a security seminar, little did I realize a digital investigator slash pen tester would provide the perfect speed bump that will have all 50 million of us asking ourselves, "Is using Dropbox worth the risk?"

Andres Oppenheimer: Venezuela’s regime is against the ropes Based on his past behavior, Venezuelan President Nicolás Maduro is likely to try several dirty tricks — including buying off legislators and using the judiciary to curtail legislative powers — to weaken the opposition supermajority in the newly elected National Assembly. But there are three major reasons why he is not likely to succeed. First, the opposition coalition’s victory was so overwhelming that Maduro would face a social explosion if he failed to recognize the new National Assembly’s powers. Despite the most undemocratic election rules in Latin America with the exception of Cuba’s, Venezuela’s opposition won a two-thirds majority of 112 seats in the 167-seat National Assembly, which could allow it to call a national referendum that could lead to Maduro’s ouster.

By David Bakke, Money Crashers Regardless of the current state of our economy and the housing market, buying a home is still a great investment. However, the resulting taxes that accompany owning a home can lead to confusion and uncertainty. In most cases, you need to itemize your taxes in order to take advantage of all the tax breaks that accompany home ownership. This might seem overwhelming, but the benefits of completing this process make up for the inconvenience. List of iPod models [[File:iphone-comparison.png|thumb|right|Size comparison, from top to bottom, between: - a first generation iPod Nano - a first generation iPhone - a fourth generation iPod Classic / The Apple iPod line has been upgraded many times, and each significant revision is called a "generation". Only the most recent generation and refurbished units of previous generations of the iPod line are available from Apple for each model (classic, nano, shuffle, touch). Each new generation usually has more features and refinements while typically being physically smaller and lighter than its predecessor, while usually (but not always) retaining the older model's price tag. Notable changes include the touch-sensitive click wheel replacing the mechanical scroll wheel, use of color displays, and flash memory replacing hard disks. Models[edit] [[Image:Nano omores.jpg|thumb|upright|Product Red 2nd generation iPod Nano.]]

Phonological Atlas of North America at the Linguistics Laboratory,University of Pennsylvania [Regional Maps] [Staff] [Sampling Methods] [Links] [Maps] [Feedback] The Telsur Project is a survey of linguistic changes in progress in North American English, supported by the National Science Foundation and the National Endowment for the Humanities. It is the creator of the Atlas of North American English [ANAE], (formerly, the Phonological Atlas of North America). The Atlas will be published in 2005 by Mouton/de Gruyter. It will be accompanied by a CD-ROM version developed by a team headed by Prof. Interview: Scott Stossel, Author Of 'My Age Of Anxiety' : NPR Atlantic magazine editor Scott Stossel has countless phobias and anxieties — some you've heard of, others you probably haven't. "There's a vast encyclopedia of fears and phobias," he tells Fresh Air's Terry Gross, "and pretty much any object, experience, situation you can think of, there is someone who has a phobia of it." Stossel's own fears include turophobia, a fear of cheese; asthenophobia, a fear of fainting; and claustrophobia. His new book, My Age of Anxiety: Fear, Hope, Dread, and the Search for Peace of Mind, is both a memoir and a history of how medicine, philosophy and the pharmaceutical industry have dealt with anxiety. Stossel says he wrote the book to help him understand and find relief from — or redemption in — anxious suffering. He's a very high-functioning anxious person and in fact, before this book, most of his colleagues were unaware of his problems.

Which languages rule the internet? Google recognises the most languages, across its Translate and Search services – with 348 languages supported on Google Search. The following infographic from Statista explores how some of the world’s biggest websites deal with the globe’s linguistic diversity. Source: Statista