Ash Beckham: We're all hiding something. Let's find the courage to open up 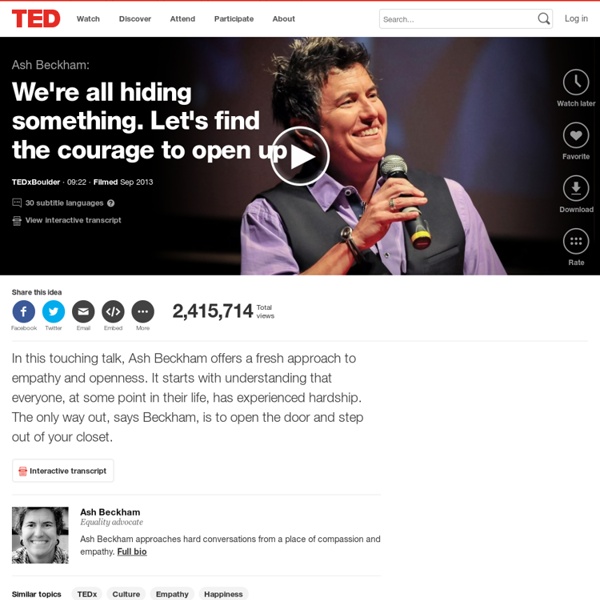 Make the most of your 20s: Meg Jay at TED2013 In her 20s, Meg Jay saw her first psychotherapy client, Alex, who was there to talk about her guy problems. Jay didn’t take the sessions all too seriously at first. But then her supervisor gave her a wakeup call. While Jay said, “Sure she’s dating down and sleeping with a knucklehead. But she’s not gonna marry the guy.” For Jay, it was an a-ha moment. There are 50 million 20-somethings in the US — that’s 15% of population. “Claiming your 20s is one of simplest things you can do for work, happiness, love, maybe even for the world,” says Jay. Jay worries that messages in the media about the changing timetable of adulthood, and the 20s being an “extended adolescence,” are trivializing this important decade. Jay also takes issue with the phrase “you can’t pick your family, but can pick your friends.” “Too many 30-somethings and 40-somethings look at themselves and say about their 20s, ‘What was I doing? So what can 20-somethings do? Meg Jay’s talk is now available for viewing.

Population pyramids: Powerful predictors of the future - Kim Preshoff If your selected country was not represented by a population pyramid in the lesson, you may wonder what it looks like. The U.S. Census Bureau has an International Data Base that can help you create one. Is your country a fast, slow or no growth pyramid? The art of science: Stunning, psychedelic images from Fabian Oefner In his TEDGlobal 2013 talk, Fabian Oefner shares breathtaking images at the nexus of art and science, which beautifully capture unique moments of physical and chemical drama. Formally trained in art and design, Oefner says that he has always been interested in science. Though he can’t pinpoint the exact moment when he became interested in pairing his two loves, he views both pursuits as inextricably linked by a crucial bond: “The most important quality of science or art is curiosity,” Oefner tells TED. “That’s what keeps me going and always finding something new.” Marbelous No. 05 (2013) An unusual look at the properties of oil, as colorful marbles of oil paint float in a solution of water and methylated spirits. Grain of Scent (2013) Tiny individual droplets of a liquid mixed with spray paint hang in the air for a fraction of a second, forming a scent sculpture. Aurora No. 01 (2013) This image illustrates the combustion of alcohol. Vanishing Beauty (2012) Powders can behave like fluids.

7 talks on how we make choices | Playlist Now playing Over the years, research has shown a counterintuitive fact about human nature: That sometimes, having too much choice makes us less happy. This may even be true when it comes to medical treatment. Baba Shiv shares a fascinating study that measures why choice opens the door to doubt, and suggests that ceding control — especially on life-or-death decisions — may be the best thing for us. The best stats you've ever seen - Hans Rosling Rosling is a passionate advocate for “liberating” publicly-funded data on the Internet. Select one topic area for which country-specific data might be compared (e.g., education, health, food production, the environment, etc.), and identify what you think are the best sources of data in this area on the Internet. Create a guide that lists these sources, and provides a brief review of each. If the administrators of these data repositories are thinking about how users might engage with the data via mobile devices or social media, note this in the review. If the administrators currently aren’t doing anything in these areas, how could mobile devices and social media enhance the user’s experience? Here are a few resources to make learning statistics an interesting experience. Someone always asks the math teacher, "Am I going to use calculus in real life?"

Graduation…now what? | Playlist Now playing Clinical psychologist Meg Jay has a bold message for twentysomethings: Contrary to popular belief, your 20s are not a throwaway decade. In this provocative talk, Jay says that just because marriage, work and kids are happening later in life, doesn’t mean you can’t start planning now. She gives 3 pieces of advice for how twentysomethings can re-claim adulthood in the defining decade of their lives. “In your 20s, you may not get married or figure out exactly what career you want to pursue. But that doesn’t mean it’s a throwaway decade, says psychologist Meg Jay.

Charming talks for a boost on a bad day | Playlist Now playing All under the age of 16, brothers Jonny, Robbie and Tommy Mizzone are from New Jersey, a US state that's better known for the rock of Bruce Springsteen than the bluegrass of Earl Scruggs. Nonetheless, the siblings began performing bluegrass covers, as well as their own compositions, at a young age. Here, they play three dazzling songs in three different keys, passing the lead back and forth from fiddle to banjo to guitar. How to turn small talk into smart conversation Imagine almost any situation where two or more people are gathered—a wedding reception, a job interview, two off-duty cops hanging out in a Jacuzzi. What do these situations have in common? Almost all of them involve people trying to talk with each other. Or worse, we do a passable job at talking. We stagger through our romantic, professional and social worlds with the goal merely of not crashing, never considering that we might soar. We at What to Talk About headquarters set out to change this. Ask for stories, not answers One way to get beyond small talk is to ask open-ended questions. Instead of . . . Try . . . Break the mirror When small talk stalls out, it’s often due to a phenomenon we call “mirroring.” Mirrored example: James: It’s a beautiful day! See? Non-mirrored example: James: It’s a beautiful day! See? Leapfrog over the expected response An even better way to break the boring-conversation mirror is to skip over the expected response, and go somewhere next-level: Riz: What’s up?