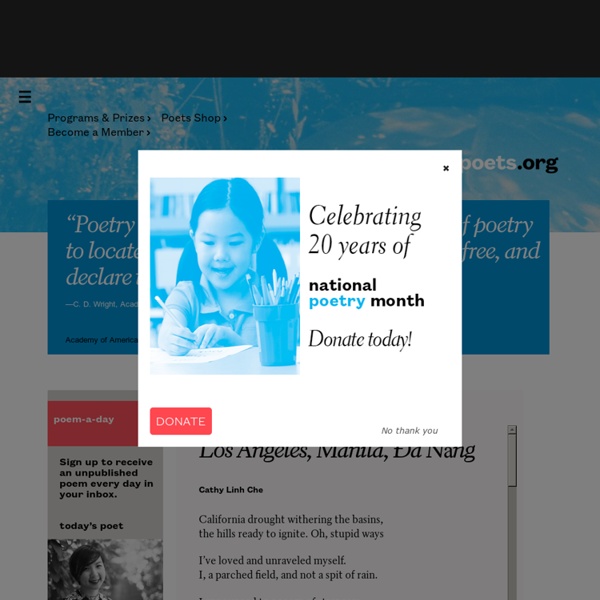 Listening Listening Lessons Dogs, Dogs, Dogs - Idioms and phrases using the word 'Dog'. Get the phone! The art of the metaphor - Jane Hirshfield To explore metaphors more fully on your own, there are three directions you can go. The first is simply to start noticing whenever you meet one. Jane Hirshfield slipped metaphors into many of the things she said in this lesson. You might listen to it again and make a list of some of the metaphors she used along the way, without pointing out that they were metaphors. Then go to any random web blog or newspaper or magazine article and just start reading until you’ve found a half dozen metaphors.

Life Doesn't Frighten Me: Maya Angelou's Courageous Children's Verses, Illustrated by Basquiat by Maria Popova A priceless primer on poetry and contemporary art for little ones, and a timeless reminder of the power of courage in all of us. Fear is the enemy of creativity, the hotbed of mediocrity, a critical obstacle to mastering life. Few embody the defiance of fear with greater dignity and grace than reconstructionist Maya Angelou, who has overcome remarkable hardships — childhood rape, poverty, addiction, bereavement — to become one of today’s most celebrated writers. Like a number of other celebrated “adult” poets and novelists who have also written for children — including Sylvia Plath, Mark Twain, Anne Sexton, William Faulkner, James Joyce, Virginia Woolf, T.

Errors: Why They Happen, How to Better Avoid Them Several people have pointed out to me, with the best of intentions, that there are a few copyediting/consistency errors in Insurgent. I'm not going to tell you what they are, because some people won't catch them and I don't want to spoil the read for them. Just know that if you read something and get confused and think you might be misreading or misinterpreting, it might not be your mistake, but rather mine. I just wanted to talk about why these errors happen. I used to read books and think "with so many rounds of edits, how can these mistakes slip by?"

Foreign Language Teaching Methods: Listening Hello! My name is Mahmoud Al-Batal and I am an Associate professor of Arabic in the Department of Middle Eastern Studies at the University of Texas, Austin. One of the areas in which I've been interested as a language teacher is listening, and I am happy to be here with you today to engage you in a discussion on listening. As learners of languages, you all realize how important listening is for communication, especially in this modern age of technology in which tremendous amounts of language input come to us through listening. Yet, despite this importance, the listening skill has not received the attention it deserves for a variety of reasons which we will discuss later in this module. While students in many language programs listen to audio recordings of the dialogues included in their textbooks, listening-only activities continue to be absent from many programs and little is done to provide systematic training in developing effective listening strategies.

Using poems to develop productive skills This is a great motivator. Poems are often rich in cultural references, and they present a wide range of learning opportunities. For me, the aim is to teach English through poetry, not to teach the poetry itself, so you don't need to be a literature expert. Most of the tried and tested activities used regularly by language teachers can be adapted easily to bring poetry into the classroom. River Profile by W.H. Auden Our body is a moulded river —Novalis Out of a bellicose fore-time, thundering head-on collisions of cloud and rock in an up-thrust, crevasse-and-avalanche, troll country, deadly to breathers, it whelms into our picture below the melt-line, where tarns lie frore under frowning cirques, goat-bell, wind-breaker, fishing-rod, miner’s-lamp country, already at ease with

Study: U.S. students struggle with vocabulary Findings from a new federal study suggest that U.S. schoolchildren may not improve their reading skills until they have a better grasp of basic vocabulary. The study, out Thursday from the U.S. Department of Education's National Center for Education Statistics, looks at the vocabulary skills of students nationwide and finds that they closely track students' reading comprehension levels. For fourth-graders, for instance, the top 25% of readers turned in an average 255-point vocabulary score on a 500-point scale; meanwhile, the weakest 25% of readers scored only 177 points.