Charting Your Next Career Move With Data From LinkedIn. LinkedIn members often list multiple positions in the experience section of their profile, and in some cases, their current position is in a different career or industry than the one previously held. 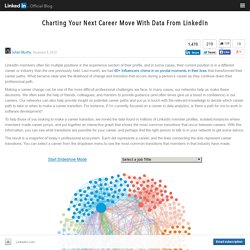 Last month, we had 60+ Influencers chime in on pivotal moments in their lives that transformed their career paths. What became clear was the likelihood of change and transition that occurs during a person’s career as they continue down their professional path. Making a career change can be one of the more difficult professional challenges we face. In many cases, our networks help us make these decisions. We often seek the help of friends, colleagues, and mentors to provide guidance (and often times give us a boost in confidence) in our careers. The result is a snapshot of today’s professional ecosystem. Admittedly, there is a lot going on in the graph above, so I’ll take a moment to provide an explanation. That being said, a few trends come to light: Interactive graph created by Skye Riley. Twelve Rules for New Grads - Michael Watkins. By Michael Watkins | 9:00 AM May 31, 2013 What advice would you give new college graduates about launching themselves into the workforce? 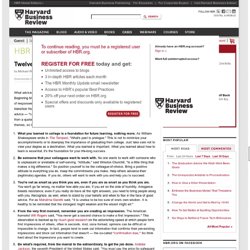 Beginning May 12, 2013, I facilitated a discussion around this question on LinkedIn. The hundreds of responses offered a wealth of advice and insight about what it takes to make a successful transition from college into the workforce. Six Powerful Ways to Stand Out at Work. Don’t be a generalist — Typecast yourself. During the Internet’s go-go days in the late 1990s, I thought the term generalist meant “she's doing two jobs and pays herself double.” 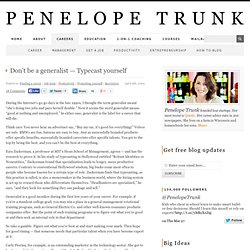 Now it seems the word generalist means “good at nothing and unemployed.” In either case, generalist is the label for a career that will die. Think cars: You never hear an advertiser say, “Buy my car, it's good for everything!” Specialist careers are the key to freedom. You have to specialize. 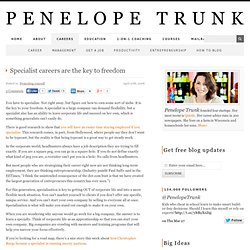 Not right away, but figure out how to own some sort of niche. It is the key to your freedom. A specialist in a large company can demand flexibility, but a specialist also has an ability to leave corporate life and succeed on her own, which is something generalists can’t easily do. MANAGEREVOLUTION: Meritocracy vs. Cronyism: Coaching the Meritocrat. Most of us would prefer to work in a meritocracy – a place where one is successful because of their talent and ideas are accepted based on their merit. Realistically, however, the world is not always conducted this way. People are hired and promoted based on who they know, or as in the case of former US Ambassador Cynthia Stroum, how much money they donate to a political campaign.

Cynthia Stroum, a Seattle philanthropist and investor, was awarded her post as US Ambassador to Luxembourg based on the fact that she raised over $500,000 for Obama’s 2008 presidential campaign. The fact that the President awarded the ambassadorship based on her favorable connections and wealth is not and was never a point of contention. Only 3 of the past 21 ambassadors to Luxembourg have been career diplomats. Cronyism, the opposite of meritocracy, exists everywhere, not just in the highest levels of the US government. The Skills Gap That's Slowing Down Your Career - Priscilla Claman. By Priscilla Claman | 1:00 PM November 28, 2012 Career speed bumps (much like their counterparts in the road) can take you by surprise. 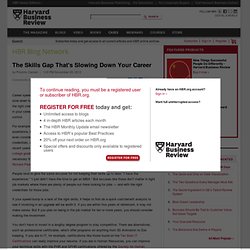 If you don’t slow down to navigate and learn from them, they can trip you up again and again. Take not having the right credentials, one common career speed bump. It’s easy to ignore if you are speeding along in your career with the same employer, but suddenly losing your job can send you careening out of control. For example, I know a bank executive who had twenty years of great community banking experience, but no bachelor’s degree. People tend to give the same excuses for not keeping their skills up to date: “I have the experience.” If your speed bump is a lack of the right skills, it helps to first do a quick cost/benefit analysis to see if investing in an upgrade will be worth it. You don’t have to invest in a lengthy degree program to stay competitive. The Top Five Career Regrets - Daniel Gulati. By Daniel Gulati | 8:00 AM December 14, 2012 What do you regret most about your career? 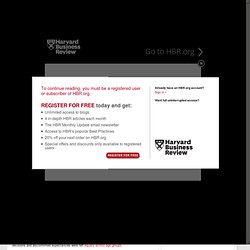 I had just finished a guest lecture on business and innovation at Parsons School for Design, and a particularly attentive front-row audience member kicked off question time with the curliest one of the day. I answered quickly with the hope of getting back on target. But judging from the scores of follow-up questions and the volume of post-lecture emails I received, a talk on career regret would have been the real bull’s-eye. Ever since that afternoon, I’ve been on a mission to categorically answer the awkward but significant question of exactly what we’d do if we could magically rewind our careers.