Articles and sites dealing with autism and work/career prospects

The 'autism advantage' at work and how it's giving firms a competitive edge. Gordon Douglas spent most of his 20s on welfare, struggling to find an employer who would look past his "differences" and give him a break. 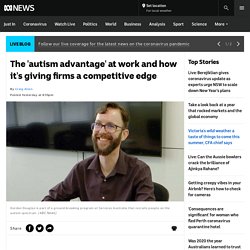 The 34-year-old battled his way through job application after job application but, despite being highly qualified and intelligent, he often fell out of contention when it came to face-to-face interviews. His problem, he said, was misreading social cues and interview panels that didn't know how to interpret his quirks. "There are still those biases that play into it," Mr Douglas said. "'Oh, this guy doesn't make eye contact, so we couldn't possibly trust him to do any work for us'. "It's been brought up with me several times in exit interviews. " Now he's in a top-secret role with the same government agency which supported him through years of jobseeker payments — Services Australia — in a ground-breaking program that recruits people on the autism spectrum.

"There was only one job I wanted, and I was the first pick for it, so, great! " Small changes you can make to help make the lives of autistic people easier - ABC News. Having a casual conversation can be the most stressful part of some people's day. 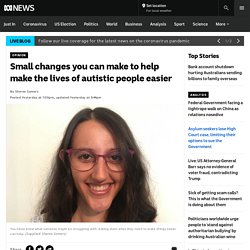 Sheree Somers knows what this feels like and she has some advice for us all to make things better. The world is an incredibly overwhelming and confusing place for me. Even though I always feel like I am trying my hardest to cope, I still struggle. I didn't find out that I was autistic until after high school. When I was finally diagnosed, everything about my life finally made sense. I feel like many of my challenges aren't because there is something wrong with me, but because the world was not built for autistic people. When I look back at my life, one of the things that has helped me most is when other people respect, understand and adapt to my differences.

As about 1 in 100 Australians is autistic, there is a chance that you will meet someone who is, even if you don't know someone right now. How Lego therapy can be a 'massive win' for kids with autism and their families. Posted about an hour agoSun 4 Aug 2019, 12:50am Seth Lester places the last block of Lego on a Jurassic Park-themed dinosaur, one of the creations he is preparing to display at the Autism Lego Expo in Mackay, north Queensland. 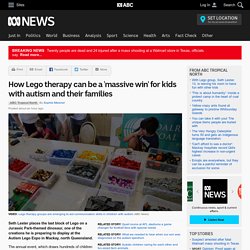 Key points: Lego therapy groups are emerging as a clinical tool to help with autism spectrum disorder (ASD) treatmentTherapists say children with ASD are more willing to talk and socialise with others while playing with LegoParents say their children's communication skills have improved since starting Lego group The annual event, which draws hundreds of children and adults alike, is held just before Christmas. For 13-year-old Seth, it's the highlight of his year. Employers urged to rethink workers with autism to help rectify chronic unemployment problem. Posted about 4 hours agoSun 28 Jul 2019, 12:11am As people with autism struggle to counter an unemployment rate of more than 30 per cent — six times the national level — disability groups are calling on employers to rethink how they can tap the potential of this group of prospective workers. 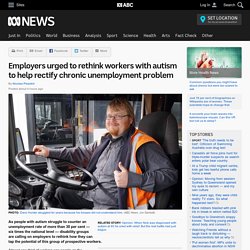 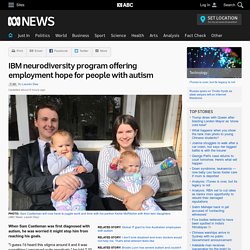 The Australian pig farm benefitting from employing people with autism. Updated about an hour agoFri 7 Sep 2018, 9:33am It is not easy for people on the autism spectrum to find work, but an Australian piggery is trying to change that. 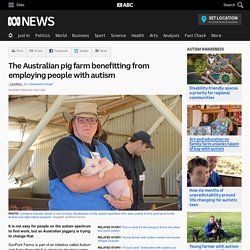 SunPork Farms is part of an initiative called Autism and Agriculture which is aiming to develop career paths for people on the autism spectrum in animal care roles. In Australia only about 40 per cent of autistic adults have a job. Centaine Kaesler-Smith has Asperger's syndrome and despite having an Animal Science degree and two certificates was unable to get full-time work. "It was a never-ending treadmill," Ms Kaesler-Smith said.

"It was just frustrating applying for jobs and the feedback from the interview was 'You did well but...' then not having feedback. It was a similar story for Mikhail Crossfield, who also has autism, and has endured a lifetime of knockbacks and disappointments. "I think the hardest thing is that we're not very vocal," Mr Crossfield said. A different approach to recruiting The program is unique. Autism and job interviews: what it's like trying to find work when you have ASD. Opinion By Cain Noble-Davies Updated I've come to the conclusion that the job application process sucks for pretty much everyone involved. 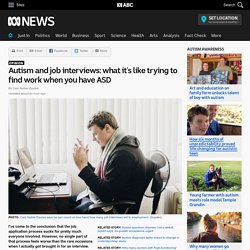 However, no single part of that process feels worse than the rare occasions when I actually got brought in for an interview. Most of the time, I'm lucky to get any response from applications, let alone someone actually taking time out to tell me that no, my application was not successful. Hell, some employers don't even get that far. I remember applying for a fast food chain, only to be greeted with one of the most automated emails I've ever seen.

Not the best feeling when it feels like no-one is willing to meet you halfway. But still, even that isn't the worst of it. Socialising has never come easy for me, so imagine how that same mindset handles the idea that based off a single conversation, you could either be employed or sent right back to square one of the process. Graduates with autism recognised for unique skill set, given new opportunities in public sector. Posted Media player: "Space" to play, "M" to mute, "left" and "right" to seek. 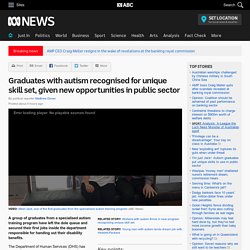 Error loading player: No playable sources found Video: Meet Jack, one of the first graduates from the specialised autism training program (ABC News) A group of graduates from a specialised autism training program have left the dole queue and secured their first jobs inside the department responsible for handing out their disability benefits. Key points: Graduates of Dandelion Program land full-time jobs in public sectorJulie Anderson says program is "best thing that's ever happened" for her son JackMinister Michael Keenan says program "a win-win" The Department of Human Services (DHS) has been funding the Dandelion Program for a number of years, which has partnered with IT companies to integrate people with autism into the workforce.

But this is the first time graduates of the program have landed full-time jobs as computer programmers and software engineers in the public sector as a result. Understanding the Spectrum - a comic strip explanation. By Rebecca Burgess For version in Spanish click here.. 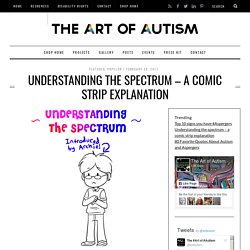 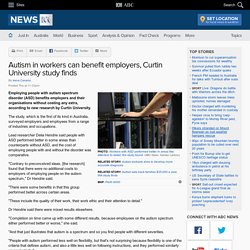 The study, which is the first of its kind in Australia, surveyed employers and employees from a range of industries and occupations. Autism Spectrum Australia (Aspect) How to support job seekers with autism. We have developed this fact sheet to provide information and direction on supporting people with an autism spectrum disorder. It is a starting point for a range of matters you may wish to consider when offering employment related support to this group of job seekers.

Note: Autism spectrum disorders will be referred to as autism throughout this document. Understanding autism and its impact on job performance People with disability are usually experts in their own needs, and will understand the impact of their disability on work performance and what workplace adjustments they may need at interviews, while training or on the job. However people with autism may not necessarily have a great level of self awareness in these areas and may require additional assistance with these matters in order to find and keep a job. Social skill difficulties stem from an inability to read others and can include: Areas of functioning important to employment may be affected and include: Put the person first. Volunteering & paid work: teens with autism spectrum disorder. Teenagers with autism spectrum disorder (ASD) can get a lot out of volunteer and paid work. The first step is matching your child’s interests and strengths to work opportunities.

Future work opportunities for your child with ASD As your child with autism spectrum disorder (ASD) moves through the teenage years, you and your child might start to think more about her future work opportunities. If your child has some specific interests – as teenagers with ASD often do – you could think about whether his interests could fill gaps in the paid and volunteer workforce. For example, your child might be really keen on working with families of children with ASD, doing graphic design or walking dogs for the elderly. Volunteer and paid work in the teenage years can help you and your child figure out whether these interests can be turned into longer-term employment goals. Volunteering Volunteering involves a person giving some of their time to help support a project or cause. Young adults on the autism spectrum face tough prospects for jobs and independent living.

How To Find Your Career on the Autism Spectrum. 34 Best and 10 Worst Jobs for Adults with Autism.