How well do you know your ologies? Put your knowledge of scientific studies to the test. Posted about 2 hours agoFri 8 Feb 2019, 10:14pm Giphy: Alright smarty pants, let's see how you fare in the 'ology' department. 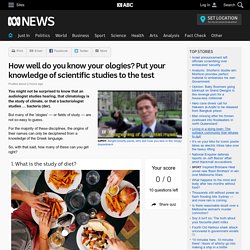 Hard to fill jobs in the NT - NT.GOV.AU. The Northern Territory (NT) Government identifies jobs in high demand or that are critical to the local economy and industry. 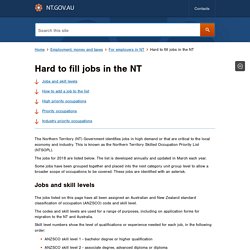 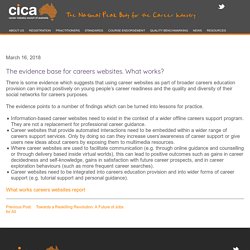 What works? There is some evidence which suggests that using career websites as part of broader careers education provision can impact positively on young people’s career readiness and the quality and diversity of their social networks for careers purposes. Thousands of kids were asked to draw their ideal job - with surprising results. Gender equality seems to be going back not forwards, as a recent edition of the Global Gender Gap Report starkly brought to our attention. 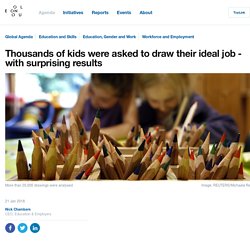 Despite the many initiatives by governments and employers around the world (private, public and third sector) and numerous reports on the issue, we are not making progress. CEOs now earn 78 times more than Australian workers. Skillsroad. In 2017 Skillsroad launched the inaugural Skillsroad 2017 Youth Census. 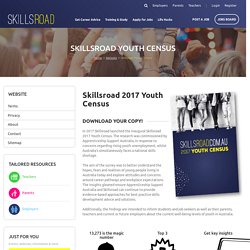 The research was commissioned by Apprenticeship Support Australia, in response to concerns regarding rising youth unemployment, whilst Australia’s simultaneously faces a national skills shortage. The aim of the survey was to better understand the hopes, fears and realities of young people living in Australia today and explore attitudes and concerns around career pathways and workplace expectations. The insights gleaned ensure Apprenticeship Support Australia and Skillsroad can continue to provide evidence-based approaches for best practice skills development advice and solutions.

Additionally, the findings are intended to inform students and job seekers as well as their parents, teachers and current or future employers about the current well-being levels of youth in Australia. Reliable, free personality test online. Take this free personality test and find out more about who you are and your strengths. 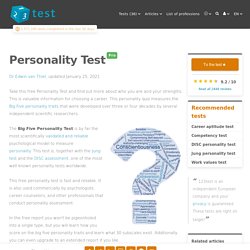 This is valuable information for choosing a career. This personality test measures the Big Five personality factors that were developed over three or four decades by several independent sets of researchers. The Big Five personality test is by far the most scientifically validated and reliable psychological model to measure personality. The test below is fast, free, and reliable. Assist others. Occupation videos Many of the occupation profiles have accompanying videos that provide insights into the occupations and their education and training requirements. 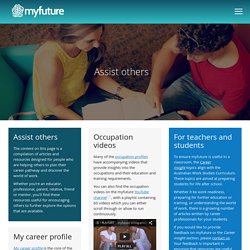 You can also find the occupation videos on the myfuture YouTube channel, with a playlist containing 60 videos which you can either scroll through or allow to run continuously. myfuture training and development. Assist others. Helping Students Find An Ideal Career Path: A Time Travel Tale. I recently found myself in a time machine and travelled back to my last year of high school. 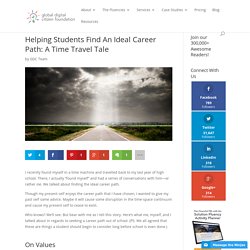 There, I actually “found myself” and had a series of conversations with him—or rather me. We talked about finding the ideal career path. Though my present self enjoys the career path that I have chosen, I wanted to give my past self some advice. Maybe it will cause some disruption in the time-space continuum and cause my present self to cease to exist. Who knows? On Values Hey, Past Self. Australianjobs2016 0. The Australian Financial Review - Business Case Studies - Edition 7. Non Profit Professional Teaching Association. 5 Things We Can do to Prepare Students to Work Independently. This morning at the Ed Tech Teacher Google Jamboree I had the opportunity to give a short presentation to kick-off the day. 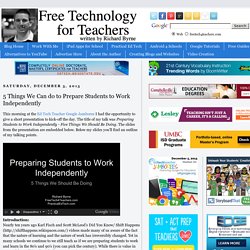 The title of my talk was Preparing Students to Work Independently - Five Things We Should Be Doing. The slides from the presentation are embedded below. CER-T0315-E-MAG. 6333.0 - Characteristics of Employment, Australia, August 2014. <h4>Please enable javascript to see the dynamic graph content</h4> The Characteristics of Employment Survey presents information on all employed persons according to their status of employment. 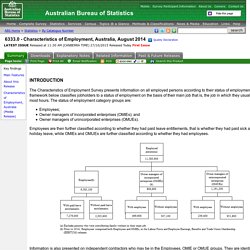 The framework below classifies jobholders to a status of employment on the basis of their main job that is, the job in which they usually worked the most hours. The status of employment category groups are: Employees; Owner managers of incorporated enterprises (OMIEs); and Owner managers of unincorporated enterprises (OMUEs). Employees are then further classified according to whether they had paid leave entitlements, that is whether they had paid sick and/or paid holiday leave, while OMIEs and OMUEs are further classified according to whether they had employees. Work Animations. Workplace Learning Toolbox. <div class='noindex'>You may be trying to access this site from a secured browser on the server. Please enable scripts and reload this page. </div> Turn on more accessible mode. Improving the employment prospects of young Australians.

Almost 40 per cent of Australian jobs could be replaced by technology by 2025, report finds. Updated Technology could make almost 40 per cent of Australian jobs, including highly skilled roles, redundant in 10 to 15 years, a new report has found. The Committee for Economic Development of Australia (CEDA) report highlighted the need for more funding and a cooperative approach to prepare for huge changes in the workforce. Almost five million jobs face a high probability of being replaced in the next two decades, while a further 18.4 per cent of the workforce had a "medium probability" of their jobs being eliminated, the report found. CEDA chief executive Professor Stephen Martin said the world was on the cusp of another industrial revolution being driven by technology, and it was not just low-paid, manual jobs at risk.

The report said jobs that involved "low levels of social interaction, low levels of creativity, or low levels of mobility and dexterity" were most likely to be replaced by automation. Autonomous driving to revolutionise labour market. Discover your employability skills for mod. A guide to starting a new job.

Females were more likely than males to be engaged in formal study, with 20% of females currently studying towards a qualification compared with 18% of males. Australian or New Zealand citizens (18%) were less likely to be in formal study than those who were not Australian or New Zealand citizens (24%). Document Selection These documents will be presented in a new window. Home - Australian JobSearch. Apprenticeships Jobs in Darwin NT.