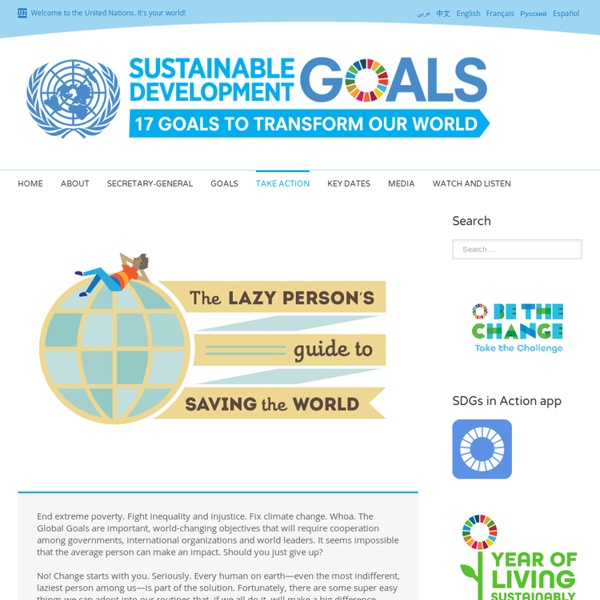 GUARDIANS OF THE PLANET Through #MyClimateAction, National Geographic is sharing amazing stories of guardians of the planet – people who are proving the power of one. This lesson plan is designed around a 5-minute short film telling a fascinating story of the Snow Guardian who has been fighting his own climate battle for over 40 years. In this lesson, students make predictions, watch a video and talk about climate change.

*****Voices of Youth: In Order to Achieve the SDGs In order to achieve the Sustainable Development Goals we need to start including young people today.The global workforce will be 75% millennials by 2025.This is a 15-year long project that young people cannot afford to inherit, it needs to be co-created since the millennial generation will be tasked with its execution. We need to find a balance between vocational education that teaches hard skills, and an education that teaches young people how to learn. Many young people find themselves increasingly frustrated with the factory-style education system that evolved out of the industrial revolution which focuses on standardizing how and what to learn. On the other hand young people don’t believe the skills being taught today are adequate for the jobs of tomorrow. Young people need to make their voices heard by speaking up and not being afraid to express their hopes and desires.

A Report Covers The Reasons That Millions Of Kids Die Or Suffer. But All The News Isn't Gloomy : Goats and Soda China is one of the countries where childhood mortality is dropping. Above, students practice martial arts. ChinaFotoPress via Getty Images hide caption toggle caption ChinaFotoPress via Getty Images How social enterprise Thankyou is fighting global poverty To date the company has funded safe water access for 192,367 people, hygiene and sanitation programs for 302,814 people and 12.1 million days’ worth of food aid to people in need, as well as funding for long-term sustainable food projects. Over its seven-year journey, Thankyou has given in excess of $3.7 million to fund projects. Despite their achievements, director and co-founder of Thankyou Daniel Flynn explains their retail competitors are fierce, and have billion-dollar investors and huge marketing budgets.

Seven Things to Know About Climate Change Free markets are often lauded for their efficient results. In this connected age, there’s something like a free market of ideas. So ask yourself: If climate change weren’t a serious danger, would 195 countries have signed the Paris Agreement, pledging to try to keep the warming below 2°C (3.6°F)?

Zika Virus Expected to Spread Through the Americas The World Health Organization warned Monday of the spread of the mosquito-borne Zika virus through the Americas, as scientists rush to better understand the disease’s suspected links to a surge in fetal deformities in Brazil and governments issue travel warnings to pregnant women. Brazilian health officials believe Zika has caused a spike in the number of babies born with microcephaly, a condition in which a baby’s brain and head don’t develop to a healthy size, leading to brain damage. Nearly 4,000 cases of microcephaly have been tracked since the outbreak began—more than 30 times the number in a typical year, Reuters reported. The disease was first reported in Brazil in May 2015. Canada and Chile are the only two countries the virus isn’t expected to reach, because the Aedes mosquitoes—the main means of transmission—aren’t there yet, WHO officials said. In the U.S., pregnant women have been warned to avoid travel south of the Mexican border or in the Caribbean.

Year of Living Sustainably - United Nations Sustainable Development Year of Living SustainablyFlorencia Soto Nino2016-08-17T16:57:38+00:00 The 17 Sustainable Development Goals have been adopted by all UN Member States. That’s great, but now what? Governments will be busy for the next 15 years working to achieve the goals, but that doesn’t mean all the work falls on them. Most people, whether rich or poor, are totally wrong about poverty The percentage of people living in extreme poverty around the world has fallen by more than half over the past three decades. But polls show that most people are not only ignorant of this fact, but believe that poverty has increased. This column explores progress towards ending global poverty by 2030, the first of the UN’s Sustainable Development Goals. Poverty figures have fallen around the world since 1990, and there is a broad consensus on the policies needed for further reductions. Eradicating global poverty is achievable, but it is dependent on global and domestic political cooperation.

BREAKING: Electrify Africa passes the House! You helped make this happen Editor’s Note: Global citizens took 33,214 actions in support of this campaign with ONE. This bill will help sub-Saharan African countries modernize their power infrastructure and increase their access to electricity—saving lives, strengthening education, alleviating extreme poverty, and accelerating growth and development. The legislation passed the Senate in December and heads now to the White House for President Obama’s signature. We couldn’t have done it without you. For the past four years, ONE members have signed petitions, written letters, sent tweets, and made calls in an effort to ask Congress to pass this bill. Global Compact Network Australia In September 2015, the UN General Assembly adopted the Sustainable Development Goals (SDGs) – 17 global goals which lay out a path to 2030 to end extreme poverty, fight inequality and protect our planet. Business has a crucial role to play in achieving the SDGs – through responsible business operations, new business models, investment, innovation and technology, and collaboration. Further, the SDGs cover a broad range of issues relevant to companies – from poverty and inequality, to climate change – and engaging with the SDG agenda can help companies understand and link their strategies with global priorities. Business can use the SDGs to identify future business opportunities, enhance the value of their corporate sustainability strategies, strengthen stakeholder relations, and engage with stakeholders through a common framework and language.