GoodCleanTech - The Independent Guide to Ecotechnology 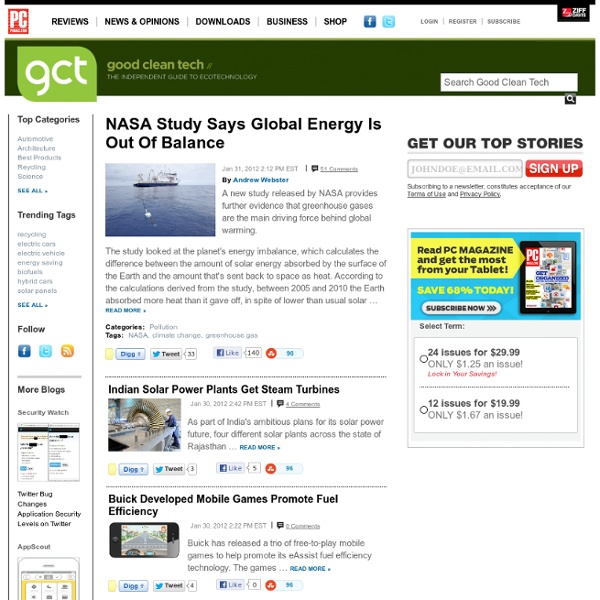 Phone Scoop Optimum Population Trust Techmeme Why We Cant Clean Up the Pacific Gyre :: Fake Plastic Fish | Live Life With Less Plastic Over the next few years you are going to hear a lot of claims about programs to clean up the Great Pacific Garbage Patch. The floating island of plastic garbage twice the size of Texas. The trash patch. The area Captain Charles Moore discovered ten years ago. The Pacific Garbage Patch is not an island. First of all, it’s a misnomer to call it an island. There are several ocean gyres full of plastic. The problem is even bigger than cleaning up the North Pacific Gyre. We’re Dumping More Plastic Into the Ocean Than We Can Clean Up. How can we ever clean it up when every day, more and more single-use disposable products are manufactured, used, and disposed of? Focusing on Cleanup Misdirects Attention from the Real Issue. The Plastics Industry sponsors cleanup efforts without reducing the production of single-use disposable plastics in the first place. You are encouraged to implement the sections and steps that help achieve your company’s specific goals. What experts have to say

Autoblog — We Obsessively Cover The Auto Industry Bill Moyers: Ending the Silence on Climate Change Ending the Silence on Climate Change from BillMoyers.com on Vimeo. Remember climate change? The issue barely comes up with any substance in our current political dialogue. But bringing climate change back into our national conversation is as much a communications challenge as it is a scientific one. This week, in an encore broadcast, scientist Anthony Leiserowitz, director of the Yale Project on Climate Change Communication, joins Bill to describe his efforts to galvanize communities over what’s arguably the greatest single threat facing humanity. Leiserowitz, who specializes in the psychology of risk perception, knows better than anyone if people are willing to change their behavior to make a difference. “[A] pervasive sense up to now has been that climate change is distant — distant in time, and distant in space,” Leiserowitz tells Bill. © 2013 Public Affairs Television Inc.