Visual Literacy: An E-Learning Tutorial on Visualization for Communication, Engineering and Business 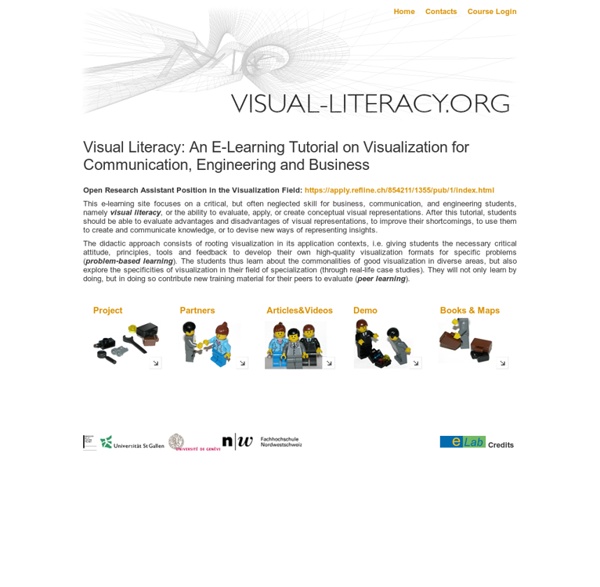 The Principles of Design The web professional's online magazine of choice. In: Columns > Design in Theory and Practice By Joshua David McClurg-Genevese Published on June 13, 2005 Starting with the Basics This column is about Web design—really, it is—though it may at times seem a bit distant and distracted. Visual Content and Communication = Secret Sauce Unless you’ve been completely unplugged from all technology for years, you’ll know that visual content/communication and storytelling are incredibly important. I was going to say unless you’ve lived in the Stone Age, but communication there was purely visual! Think about all the carvings on rocks. Think about ancient Egypt and all the hieroglyphics. Not only is that visual content, but it also tells a story.

Studies Confirm the Power of Visuals in eLearning We are now in the age of visual information where visual content plays a role in every part of life. As 65 percent of the population is visual learners, images are clearly key to engaging people in eLearning courses. Moving and still images have been included in learning materials for decades, but only now has faster broadband, cellular networks, and high-resolution screens made it possible for high-quality images to be a part of eLearning visual design. Graphic interfaces made up of photos, illustrations, charts, maps, diagrams, and videos are gradually replacing text-based courses. In this post, we will dig deep into some statistics and facts to further convince of why eLearning developers should embrace visuals when creating their courses.

How to Focus a Presentation This post was written by Scott Schwertly Scott is the Founder and CEO of Ethos3. One of the most difficult tasks when fashioning a presentation is the process of sorting through the myriad of available information and turning it into a coherent outline with a few main points and one clear focus. Think of your presentation as a photomosaic, a large photo composed of lots of little pictures. You know, like this. Making up metaphors – John Saito If you’ve ever taken a writing class, you’ve probably played around with metaphors. A metaphor is when you talk about one thing in terms of another: Time is moneyConsumed by loveThe sweet smell of success A lot of people think of metaphors as a fancy writing tactic—a way to spice things up or sound more poetic. Well, knock that idea out of your head, because metaphors aren’t just for poets.

Teach Yourself Graphic Design: A Self-Study Course Outline Fortunately, it isn’t required to go to design school in order to be a graphic designer. A good foundation in graphic design history, theory, and practical application will help you hit the ground running. There are plenty of resources available in which you can learn graphic design on your own. 12 Ways to Become a Better Designer in 2012 - Designer Blog Designer Blog Judging by the developments at 99designs, this year is going to be an important one. We’re growing and improving at an ever increasing pace and we want our designers to grow with us too. We have 12 months ahead — let’s use each month to become a better designer by learning a new skill and trying a new tip! 1. Learn to use the grid Building a well-balanced design layout, whether for web or print, is one of the most difficult and excruciating design tasks.

When Typography Speaks Louder Than Words Advertisement Clever graphic designers love to use typography to explore the interaction between the look of type and what type actually says. In communicating a message, a balance has to be achieved between the visual and the verbal aspects of a design. Sometimes, however, designers explore the visual aspect of type to a much greater extent than the verbal. Evaluating multimedia presentations I don’t like PowerPoint. I’m happy to admit that; in fact I proclaim it loudly whenever I have the opportunity. PowerPoint became popular because it made presentations easy, but I would argue that it makes them too easy, encouraging and enabling presenters to dumb down what they have to say, letting the slides speak for them and condensing complicated arguments into simplistic bullet points from which the audience is continually distracted by a jumble of irrelevant images, sounds, and animations. It doesn’t have to be this way — and if we’re going to use PowerPoint in the classroom, we can’t allow it to be this way.

10 Books Of Visual Ideas Sharebar Everyone needs a way to get inspired. When it comes to visuals, you can find ideas all around you—in magazine covers, advertisements, design websites and my favorite, books. Here are some of the latter that you might find intriguing. You Need to Know These Seven Tips If You Build Graphics for E-Learning If you’re building elearning courses, then you should expect to have a graphics editing program as part of your tool chest. In a previous post I mentioned a few free (or low cost) graphic editors if you don’t already have one. There’s even a good discussion about graphics applications in the elearning community. Jump in and share a favorite of yours.