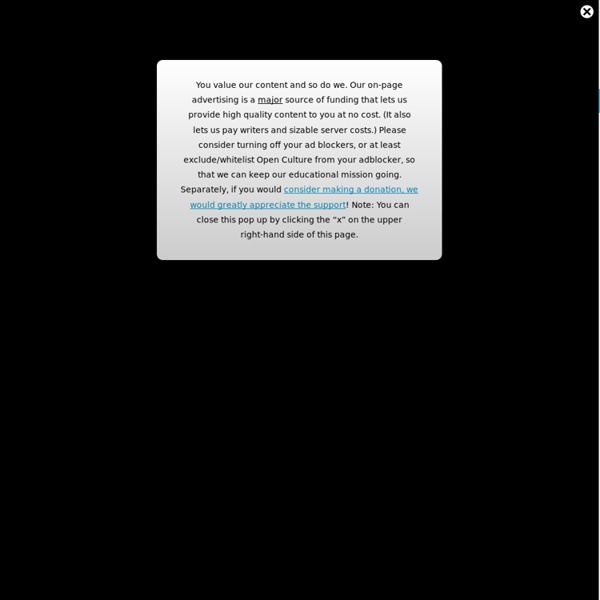 Think of the name Buckminster Fuller, and you may think of a few oddities of mid-twentieth-century design for living: the Dymaxion House, the Dymaxion Car, the geodesic dome. But these artifacts represent only a small fragment of Fuller's life and work as a self-styled "comprehensive anticipatory design scientist." In his decades-long project of developing and furthering his worldview — an elaborate humanitarian framework involving resource conservation, applied geometry, and neologisms like "tensegrity," "ephemeralization," and "omni-interaccommodative" — the man wrote over 30 books, registered 28 United States patents, and kept a diary documenting his every fifteen minutes. In January 1975, Fuller sat down to deliver the twelve lectures that make up Everything I Know, all captured on video and enhanced with the most exciting bluescreen technology of the day. Parts 1-12 on the Internet Archive: 1, 2, 3, 4, 5, 6, 7, 8, 9, 10, 11, 12 Parts 1-6 on YouTube: 1, 2, 3, 4, 5, 6 Related Content: Related:  Interesting Content • Domos 3

In New York City, a Vibrant Green Space Emerges...Underground Many New Yorkers will tell you they can’t imagine life without the city’s most coveted green space, The High Line. Built in the 1930s, as part of a massive public-private infrastructure project called the West Side Improvement, the track (now a pathway) was designed to lift freight traffic 30 feet in the air, removing dangerous trains from the streets of Manhattan’s largest industrial district. Now used as an elevated public park, the city anxiously awaits the birth of an underground sibling, the Lowline. The Lowline site was entirely unaffected by the storm (Sandy), and has proven to be incredibly resilient over the last six decades of neglect. Lowline cofounders James Ramsey and Daniel Barasch asked themselves where they could build a new green space for an overcrowded New York City. The terminal was in service until 1948, when streetcar service was discontinued, and has not been used ever since. Daniel Barasch: We believe the Lowline is hitting a cultural nerve for a few reasons.

Carbon calculator: how taking one flight emits as much as many people do in a year | Environment Taking a long-haul flight generates more carbon emissions than the average person in dozens of countries around the world produces in a whole year, a new Guardian analysis has found. The figures highlight the disproportionate carbon footprint of those who can afford to fly, with even a short-haul return flight from London to Edinburgh contributing more CO2 than the mean annual emissions of a person in Uganda or Somalia. 2019 is forecast to be another record-breaking year for air travel, with passengers expected to fly a total of 8.1tn km, up 5% from last year and more than 300% since 1990. Taking one return flight generates more CO2 than citizens of some countries produce in a year How about your next trip? Source: Atmosfair According to figures from German nonprofit Atmosfair, flying from London to New York and back generates about 986kg of CO2 per passenger. Aviation emissions could triple in the next three decades Sources: IEA, Lee (2019) based on Fleming and Ziegler (2016)

What’s Annoying the North Koreans? Relations between the United States and North Korea have reached a nadir, and in most Western media reports it is the seemingly irrational harsh rhetoric emanating from North Korea that is to blame. Inexplicably, we are told, North Korea has chosen to raise tensions. What is missing from this image of hostile North Korean behavior and blameless American victimhood is context. One does not have to look very far back in time to discern what is troubling the North Koreans. The first step on the path to worsened relations came in October 2012, when the United States granted South Korea an exemption under the Missile Control Technology Regime, permitting it to extend the range of its ballistic missiles so that they could cover the entire territory of the DPRK. i As a result, there was one set of terms that applied to every nation which had joined the treaty, and a different set applying only to South Korea, clearly for the purpose of targeting its neighbor to the north.

There’s another story to tell about climate change. And it starts with water | Judith D Schwartz It’s easy for all concerned about air, water and nature to descend into despair as we watch brazen rollbacks of environmental legislation in the US. Just last week, developments included an executive order to rewrite US carbon emissions rules, jeopardising the country’s ability to uphold its Paris climate talk commitment; the end of a moratorium on new coal leases; and the green-lighting of a pesticide claimed to cause harm to children. But as apathy is not an option, let’s try to think beyond the usual strategies. For one, we can recognise that the way we talk about our environmental challenges has interfered with our ability to truly grapple with them: that we limit ourselves by creating too simple a story. Specifically, the story we tell about climate. Now I’m not speaking of climate-change denial. In a popular TED talk, Nigerian-born author Chimamanda Ngozi Adichie introduced the concept of the “single story”: the tendency to uncritically embrace received wisdom.

TYNAN March 2011 Here is a motorized drinking bear automaton believed to be produced around 1932 by the Decamps firm. The bear measures about 14 inches tall, and is somewhat atypical in that it has white fur rather than brown or black. The bear sure looks like it is drinking, but in reality, there is hole in the the bottom of the cup. From the eBay description of this drinking bear: The Decamps electric Dinking Bear is a fun automaton and one of a very few that uses water. Here is the full ebay listing with many photographs and a lengthy description of this vintage motorized drinking bear automaton Labels: animals, drinking, France, motion, Roullet et Decamps, vintage, water

You Are What You Like: What Your Facebook Activity Says About You : Science Sushi Facebook gleefully reported earlier this week that their privacy practices are “A-Ok”, in response to the growing federal concerns that the company leaks too much personal information. While it’s all well and good that they are legally in bounds, users still worry about just how much is shared via the popular social networking site. After all, just what does your Facebook activity say about who you are? A lot, actually. Michael Kosinski and his colleagues from UC Berkley recently investigated just how much Facebook activity reveals about a person. They wanted to know if a user’s age, gender, sexual orientation, or political beliefs could be inferred from their “likes”, even if such personal details were not provided. Prediction accuracy of simple traits, according to Kosinski et al. 2012 The algorithm they created could predict race and gender with over 90% accuracy. From the pages you like, the computer could predict whether you drink, smoke, or use drugs with more than 60% accuracy.