A Wall That Plays Music When It Rains 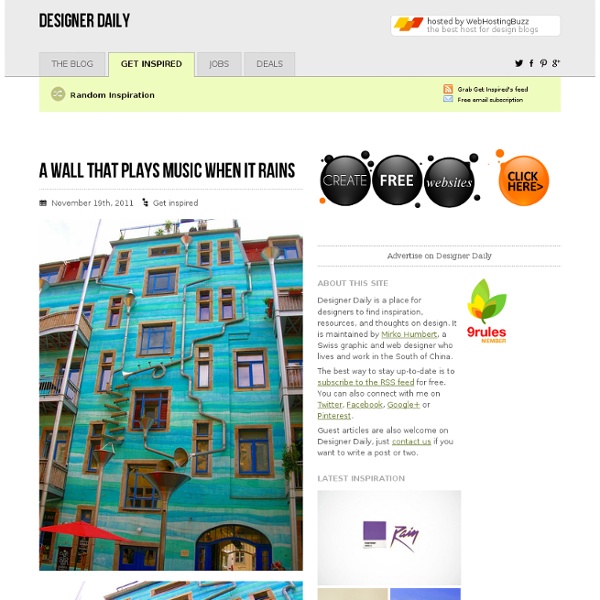 Nature Blows My Mind! The Flamboyant Sea Slug nicoboxethai/CC BY 2.0 Nudibranch, or what we usually call sea slugs, blow my mind. Ever since spotting one for myself during a tide pool trip about a year ago, I've been fascinated with these creatures. I think of them as the drag queens of the sea: flashy stand-outs that are always dressed to the nines. The one I found is a Hermissenda crassicornis -- the flashy little thing pictured below with bright pinkish-orange cerata waving like a feather boa and neon blue outlines around its tentacles.

Fractal World Gallery Thumbnails : cosmic recursive fractal flames or flame fractals Fractal World Gallery contains a collection of Pure flame fractals, fractal flame composites, fractals, etc: established 1998 Flame Fractals date from 1998 to the Present. by Cory Ench © 2007 Images from this gallery may only be used with artist's permission Fractal software includes Frax Flame and Apophysis for cosmic recursive fractal flames. FAQ I CONTACT I DONATE More artwork by Cory Ench at www.enchgallery.com 120 images in room 1 click on the thumbnails for larger image size Tom Lehrer's "The Elements". A Flash animation by Mike Stanfill, Private Hand The Periodic Table The periodic table of the chemical elements (also periodic table of the elements or just the periodic table) is a tabular display of the chemical elements. Although precursors to this table exist, its invention is generally credited to Russian chemist Dmitri Mendeleev in 1869, who intended the table to illustrate recurring ("periodic") trends in the properties of the elements. The layout of the table has been refined and extended over time, as new elements have been discovered, and new theoretical models have been developed to explain chemical behavior. The periodic table is now ubiquitous within the academic discipline of chemistry, providing a useful framework to classify, systematize, and compare all of the many different forms of chemical behavior.

Nudibranch looks like a bunny of the sea It’s round, and fluffy and has wiggly little ears! Sort of. These little sea creatures, affectionately dubbed “sea bunnies” have recently become social media celebrities. 20 stunning examples of bamboo architecture Now it’s time for bamboo to be used for state-of-the-art research centers. The Rix Center for Ocean Discoveries, a hub for oceanographic researches designed by the eminent Canadian architectural firm de Hoog & Kierulf, incorporates an area of 1200 sq m and exhibits a plethora of spatial demarcations such as conference halls, lecturing halls and advanced laboratories for marine sciences. But the defining feature of this fascinating design would be its scallop shaped shell composed wholly from bamboo. Sustainable dormitories for Thai orphanage: Architectural firm TYIN Tegnestue has taken up the conscientious approach to bamboo construction.

16 tips to improve as a graphic designer Graphic design is a field that is quickly changing, both creatively and technically, and while it is easy to get caught up in learning new technical skills, it is just as important to focus improving and pushing the limits of our creativity. While in design school, it was easy to surround myself with inspiration and engage in activities that helped my understanding of effective design. Once I graduated I feared losing it, since I was no longer surrounded by a learning environment.

J. Mayer H. Architects’ Metropol Parasol opening this Sunday We’ve told you before about “Metropol Parasol”, the Redevelopment of Plaza de la Encarnación in Sevilla, designed by J. MAYER H. Architects. March 27 marks the opening, while the final completion of the project is scheduled for April 2011. Jinns in Islamic Art – Islam and Science Fiction Jinns are intelligent beings in Islamic belief system which have free will just like human beings. Unlike humans however they are made of smokeless fire. Jinns are also supposed to have different religions just like humans e.g., Christianity, Islam, Judaism, Hinduism etc and even Atheism. Jinns are supposed to live in the unseen world which can be thought of as a parallel dimension co-existing with our own. Here are some depictions of Jinns in Islamic art over the course of centuries. Jinns that cause toothache!

Ecopods: Shipping Container Housing Available Now Dwight Doerkson has developed "an affordable eco friendly building that’s transportable and doesn’t need to be hooked up to the grid"- out of shipping containers. He cuts out an entire wall and hinges it, so when you want to leave your ecopod you simply flip a switch and a solar powered winch pulls up the deck and closes up the box. The floors are recycled rubber, the walls are FSC birch ply over a bio-based green foam insulation, the optional toilet is composting and fridge is solar powered. From their website: "The eco-pod began its life as a shipping container, hence its sturdy, engineered form and tight weather seal. The imbalance of goods traveling from East to West has created a surplus of these in North America, which means that the purchase price is a fraction of the original manufacturing cost - this saving is then passed on to you, the 'end user'. Interview of Dwight Doerkson

HANDMADE PAPER ARTS Posted by: otilrotcod on Sep 16, 2011 Tagged in: Untagged STEP 1 (SOAKING OF PAPER) Soak paper in a DEEP CONTAINER. Make sure that the paper is fully soaked for quick pulping. STEP 2 (PULPING OF PAPER) There are 2 ways to PULP paper- By OSTERIZER or By HAND(Manually) Once you achieved its claylike pulpiness make sure that any traces of its original form(paper) is gone and that pulped paper was formed. STEP 3 PREPARE A PLYWOOD AS BASE FOR YOUR CREATION. Isleworth Mona Lisa Declared Authentic By Swiss-Based Art Foundation And More Art News (PHOTO) The case of the Isleworth Mona Lisa continues to get more interesting, as an art foundation in Switzerland announced this week that they have reason to believe the painting -- purported to be an earlier version of Leonardo da Vinci's iconic portrait -- is authentic. According to the Guardian, the Swiss Federal Institute of Technology carried out tests on the mysterious artwork after it was revealed last September, determining that the canvas behind the much younger looking Mona Lisa dates somewhere between 1410 and 1455. This finding refutes claims that the piece was a late 16th century copy, as Italian geometrist Alfonso Rubino recently determined that the work conformed to Leonardo's basic line structures.