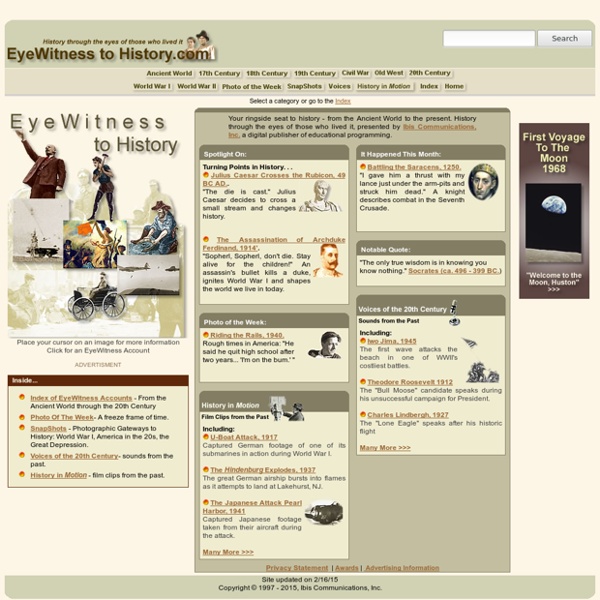 Related:  Visual Literacy in the Classroom

Teaching Visual Literacy to Students Visual literacy is a multi-faceted subject matter, and faculty wishing to include images in their curriculum can quickly find themselves overwhelmed by the prospect of addressing visual literacy. For an introduction to the topic visit The Basics of Visual Literacy: Form, Context and Content. The following tools are intended to help faculty customize their curricula to incorporate visual literacy in ways that suit their individual instructional needs. Some faculty may want to teach visual literacy as a one-time in- or out-of-class activity. Others may want to teach visual literacy as multi-week or semester-long elements of their courses. Electronic Resources for Classicists It's been more than 20 years since Electronic Resources first appeared. The web was still in its infancy and the gopher was the state of the art in technology. The first version of this survey was published in the February 1994 issue of the New England Classical Journal. [NECJ XXI.3 (1993-94) 117-21]. One year later the number of web sites and internet resources had grown so much that a revision of the list was necessary. The second survey was published in the February 1995 issue of the same journal (NECJ XXII.3 (February 1995).

mental_floss Blog » 4 More Forgotten Founding Fathers This Saturday is July 4, a day when Americans of all shapes and sizes will come together to commemorate the founding of their country, and the noble pursuit of life, liberty, and overcooked hamburgers. Here's a quick quiz question "“ how many people signed the Declaration of Independence? We're betting that few of you, not including the people who compulsively Googled that question, knew the answer is 56. Fifty-six?! Yes, there were far more Founding Fathers than most people learn about in civics class.

Teaching History Resources - Historic Newspapers Looking after the world’s largest private archive of original newspapers means that we’re extremely passionate about history. This is why we decided to pick out interesting coverage from historical dates of significance so that others could learn about the past, as it was reported at the time! Our free teaching packs are available in order to help students discover the cause and consequence of historical events. Hard copies are currently available to schools, universities, libraries and accredited education establishments only. The Catholic Encyclopedia Please help support the mission of New Advent and get the full contents of this website as an instant download. Includes the Catholic Encyclopedia, Church Fathers, Summa, Bible and more — all for only $19.99... Click here to jump straight to the articles: Original Preface.

Digital Activities For Visual Literacy Visual literacy is the ability to construct meaning from or communicate meaning through information presented in the form of an image. While it may seem like this could only be applicable to the elementary student, visual literacy pervades all subject areas, disciplines, and grade levels in schools. From identifying patterns, to understanding modern art, to interpreting and creating graphs, visual literacy is one of the most widely important skills students should develop while in K-12 schools. The Encyclopedia Americana presents The Encyclopedia Americana is a US-based encyclopedia published in the 20th and 21st century. (It is also the name of some otherwise unrelated 19th-century encyclopedias, also listed on The Online Books Page, some under the spelling Encylopaedia Americana.)

the Suda On Line (SOL) The Suda on Line For Attic phrase in Plato let them seek, I poach in Suidas for unlicens'd Greek. ― Alexander Pope, The Dunciad 4.227-8 Pope’s ‘Suidas’ is not a man but a work, The Suda (or Stronghold): a massive 10th century Byzantine Greek historical encyclopedia of the ancient Mediterranean world, covering the whole of Greek and Roman antiquity and also including Biblical and Christian material. Preserved in several medieval manuscripts, it has been edited and published several times since the end of the 14th century in traditional hard-copy scholarly editions, most recently that of Ada Adler (Teubner, 5 volumes: 1928-1938, reprinted 1971). The Suda On Line (SOL) project, begun in 1998 as part of the Stoa Consortium, opens up this stronghold of information by means of a freely accessible, keyword-searchable database, with English translations, notes, bibliography, and links to other electronic resources.

A Pictures Worth A Picture’s Worth Analyzing Historical Photographs in the Elementary Grades Keith C. Barton A picture can be worth a thousand words—and maybe a lot more. Imagine the response of students as their teacher holds up a black-and-white photo (Figure 1) in which vintage cars fill a city street.