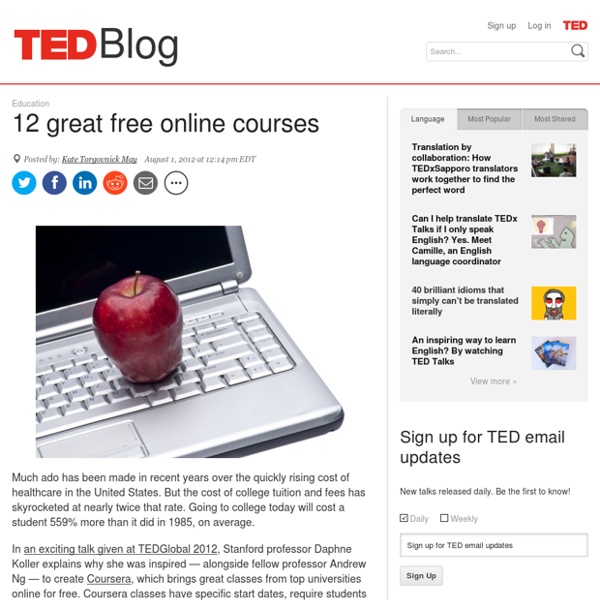 Much ado has been made in recent years over the quickly rising cost of healthcare in the United States. But the cost of college tuition and fees has skyrocketed at nearly twice that rate. Going to college today will cost a student 559% more than it did in 1985, on average. In an exciting talk given at TEDGlobal 2012, Stanford professor Daphne Koller explains why she was inspired — alongside fellow professor Andrew Ng — to create Coursera, which brings great classes from top universities online for free. Coursera classes have specific start dates, require students to take quizzes and turn in assignments, as well as allowing professors to customize their course into online chunks rather than simply recording their lectures. Even outside of Coursera, the number of college classes available on a computer screen rather than in a brick-and-mortar lecture hall is staggering. Inspired by Young, below, find 12 courses you could take for a completely free TED degree in Big Ideas.

THE PURSUIT OF SATORI | infinite satori We’ve all made fear-based decisions in our lives. Fear of the unknown. Fear of the unexpected. Fear of death. Fear of failure. Do you know that unexplainable feeling you get.. some sort of natural high? Through my love for photography I found an outlet where I can take that infinite Satori moment, hold it in my hands, and show it to people who may or may not know that feeling and be moved by it. Like this: Like Loading...

100 Amazing How-To Sites to Teach Yourself Anything Posted by Site Administrator in Online Learning May 7th, 2009 Learning new skills and expanding your knowledge doesn’t have to cost you an arm and a leg. There are loads of free resources on the Web that can help you find instructional videos, tutorials and classes to learn a wide variety of skills from fixing basic car problems to speaking another language. With 100 sites to choose from, you’re bound to find something here that will help you learn just about anything you could want. General Tutorials These sites offer a wide range of tutorials and videos. Around the House Want to know how to fix that broken cabinet or hang up some great wallpaper? Business and Management If you feel like you’re seriously lacking on business and management skills at work, no need to worry. KnowThis? Language and Writing Those who want to learn a new language, improve their writing skills or just learn more about literature will be well-served by these instructional sites. Technology Math S.O.S. Science Creativity

WWTDG: Faith Cheltenham and BiNet USA Faith Cheltenham Photographed When Pregnant With Her First Child (Image from Advocate.com) I met Faith Cheltenham while doing standup in a Los Angeles LGBT bar. She was outspoken, bold, brash, extremely opinionated, and totally approachable. Three years later, I saw her in an Advocate article celebrating LGBT activists and I was blown away by the amount of passion she had invested in the bisexual movement. When thirty-two year old Faith was growing up in San Luis Obispo, California, there was less than one percent of African Americans in the city. VIDEO: Faith Cheltenham Talking About Being An LGBT African American In A Church Community At UCLA in the late 90s, Faith saw LGBT rights activist and former Speaker of the House Newt Gingrich’s half-sister Candace Gingrich speak for National Coming Out Day, specifically emphasizing how people of all faiths needed to start coming out of the closet. Faith Cheltenham Marches For Bisexuality at LA Pride in 2010 Faith Cheltenham Wants To Talk To You!

7 Great Online Alternatives to Photoshop We all love Photoshop and many of you will use it for hours on a daily basis. The question is, have you ever been in a situation where Photoshop isn’t installed on a computer you are using? Of course you have. This is why this post is important. 7 Great Online Alternatives to Photoshop Pixlr Looks and feels a lot like Photoshop fotoflexer Edit photos from many online sources (Flickr, Photobucket etc.) SumoPaint Looks Impressive (especially the real–time gradient) Splashup DrPic Built in JavaScript thumba Drag ‘n Drop! Image Editor Bonus! From start to finish, deviantART Muro allows users to create complete works of art in ways never before realized by digital drawing programs. deviantART Muro already boosts standard and interactive brushes, full-blown layer capabilities, and the ability to upload directly to your deviantART account, but we’ve also left room for expansion. Muro About the author: Ahmed View all posts by Ahmed Ahmed is a UK based internet marketing professional.

English Pronunciation If you can pronounce correctly every word in this poem, you will be speaking English better than 90% of the native English speakers in the world. After trying the verses, a Frenchman said he’d prefer six months of hard labour to reading six lines aloud. Dearest creature in creation, Study English pronunciation. I will teach you in my verse Sounds like corpse, corps, horse, and worse. I will keep you, Suzy, busy, Make your head with heat grow dizzy. Tear in eye, your dress will tear. English Pronunciation by G. Source Breaking News: Fake News Special! The Taming of the Shrew: Act I, scene ii Summary: Act I, scene ii A brash young man named Petruchio, newly arrived in Padua, goes with his servant Grumio to see Hortensio, whom he knows from Verona. Grumio and Petruchio become embroiled in a comic misunderstanding at the door, but eventually Hortensio comes down to greet Petruchio and ask why he is in Padua. Petruchio responds that, upon his father’s death, he set out to look for a wife, hoping to marry a rich man’s daughter and thereby augment his family fortune. Hortensio, determined to find a potential suitor for Katherine so that he himself may marry Bianca, recognizes his opportunity and decides to convince Petruchio to marry the shrew. Gremio and Lucentio enter on their way to Baptista’s house, interrupting Hortensio and Petruchio. At this point, Tranio enters, disguised as Lucentio, with Biondello as his servant. Analysis : Act I, scene ii The reader is bombarded in the first half of the scene by Petruchio’s overbearing personality.

Scandals of Classic Hollywood: The Gloria Swanson Saga, Part One Gloria Swanson wasn’t here to make friends. She wasn’t “just like us.” She didn’t take out the garbage or “wear cotton” or go to the bathroom. Which is part of the reason she’s so unfathomably good in Sunset Boulevard, but we’ll get there soon enough. I also know a ton about her because she, like so many of our grandmothers, was a notorious packrat. Swanson was born in 1899. At the age of 17, Swanson up and moved to California to appear in a bunch of Mack Sennett comedies. I realize that you’re probably thinking that these girls are wearing more clothes than most high schoolers currently wear to prom. Swanson appeared in a Mack Sennett comedy. Obviously. During this period, Swanson endured what can only be described as a horrible marriage to fellow Sennett star Wallace Beery. But Swanson was undeterred in her professional life. These are also the films that made Swanson a tremendous star — along the lines of Charlie Chaplin, Mary Pickford, and Douglas Fairbanks. And so he did.

Well, At Least There Was Good Stuff to Read: The Books of the Decade Anybody remember how anxious and thrilled we were in those last months of the 20th century? When we weren't at war and we had a budget surplus and it looked like Al Gore would be president? The prospect of a 21st century filled with new technologies, new art and literature loomed large and bright. But now, as we look back at what was decidedly a shitty decade for an incredible variety of people in an equally incredible variety of ways (evictions/invasions/bombings/etc), it's surprisingly hard to be pessimistic about the books that assessed, satirized, dramatized and distracted us from the events of the past 10 years. Goethe said that the decline of a nation's literature is the precursor to that nation's fall, and with this look back at the books that defined the decade, we'd like to tell Goethe to suck it. Almost in spite of ourselves, we're still writing, translating, publishing and even occasionally buying good books in this country.

Bright Knit Hats and Mittens Holiday Decorations [ Close Privacy Policy ] Privacy Policy / Your California Privacy Rights Revised and posted as of March 4, 2013 Prime Publishing, LLC ("Company," "we" or "us") reserves the right to revise this Privacy Policy at any time simply by posting such revision, so we encourage you to review it periodically. This Privacy Policy will tell you, among other things: Your California privacy rights. ACKNOWLEDGEMENT/YOUR AGREEMENT Company websites are not intended for use by individuals under the age of 18 or those who are not legal residents of the United States. HOW DO WE COLLECT INFORMATION AND WHAT INFORMATION DO WE COLLECT? Distribution Partners Website operators that license our ad serving technology pass information to us so that we may serve advertisements to you. Offer Forms We also collect information about you when you complete a survey or offer form on one of our websites or web pages. Website Registration Forms We collect information about you when you register on one of our websites.

Anti-Suffragette Postcards from the Early 20th Century by Maria Popova A brief pictorial history of socially sanctioned sexism. Among February’s vintage Valentine’s Day postcards from the early 1900s was some anti-suffragette propaganda. That brand of misogynist messaging, it turns out, wasn’t reserved just for Cupid’s favorite holiday — in fact, as the suffrage movement swelled into a groundswell in the early 20th century, the picture postcard industry was enlisted in producing propaganda that discredited and denigrated women fighting for the vote. Here are a few more anti-suffragette postcards from the period, a reminder at once amusing and appalling of our culture’s history of socially sanctioned bigotry. (No doubt, Tea Party signage on marriage rights and immigration will appear in similar contexts in the cultural criticism of tomorrow.) If this wasn’t amusingly appalling enough for you, up the ante with this Victorian list of don’ts for female cyclists, but then lift your spirits with a look at how the bicycle actually emancipated women.