CALLING ALL CODERS. Standards. Coding from kindergarten to graduation. We interact with computing devices every day—so should we have a better understanding of the science behind them? 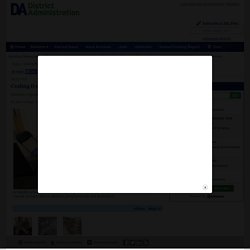 An increasing number of districts are saying yes. This year, 25 states require computer science courses for high school graduation, compared to only 11 states in 2013, according to the Computer Science Teachers Association (CSTA). Districts are teaching basic coding to students as early as kindergarten, embedding computer science principles into core curriculum, and mandating computer science courses for graduation. The lessons teach students logical reasoning, algorithmic thinking and structured problem-solving—concepts and skills that are valuable in any discipline, proponents say. Should every school class be a computer coding class? This spring, at St. 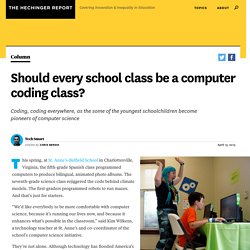 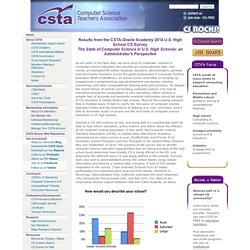 High School CS SurveyThe State of Computer Science in U.S. High Schools: an Administrator's Perspective As we usher in the New Year, we have much to celebrate: interest in computer science education has reached an unprecedented high. Last month, an estimated 80 million students, teachers, administrators, parents, and community members across the globe participated in Computer Science Education Week (CSEdWeek), an annual event committed to ramping up engagement in programming, app development and design, robotics, networking, and other computational thinking skills and activities. Yet despite the recent frenzy of activity surrounding computer science (CS) and its relevance among the constellation of core disciplines, there remains a notable lack of accurate and generally available information about the state of CS education in United States high schools. 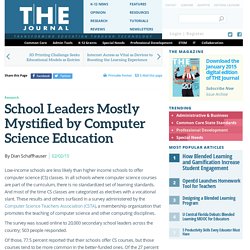 In all schools where computer science courses are part of the curriculum, there is no standardized set of learning standards. And most of the time CS classes are categorized as electives with a vocational slant. The survey was issued online to 20,000 secondary school leaders across the country; 503 people responded. A Coder, a Programmer, a Hacker, a Developer, and a Computer Scientist walk into a Venn Diagram. How to use GNU licenses for your own software. This is a brief explanation of how to place a program under the GNU General Public License, Lesser General Public License, or Affero General Public License. 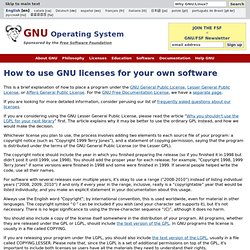 For the GNU Free Documentation License, we have a separate page. If you are looking for more detailed information, consider perusing our list of frequently asked questions about our licenses. If you are considering using the GNU Lesser General Public License, please read the article “Why you shouldn't use the LGPL for your next library” first. The article explains why it may be better to use the ordinary GPL instead, and how we would make the decision. Whichever license you plan to use, the process involves adding two elements to each source file of your program: a copyright notice (such as “Copyright 1999 Terry Jones”), and a statement of copying permission, saying that the program is distributed under the terms of the GNU General Public License (or the Lesser GPL).

How To Pick A Programming Language To Learn Today & Get A Great Job In 2 Years. Coding for Kids. Coding is an emerging global “language” – arguably the most important one at the moment. 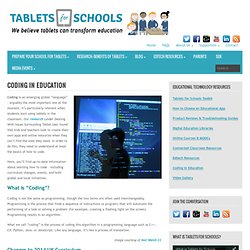 It’s particularly relevant when students start using tablets in the classroom. Our research (under Dealing With Issues Surrounding Tablet Use) found that kids and teachers look to create their own apps and online resources when they can’t find the ones they need. In order to do this, they need to understand at least the basics of how to code. Here, you’ll find up-to-date information about learning how to code – including curriculum changes, events, and both global and local initiatives. What is “Coding”? Coding is not the same as programming, though the two terms are often used interchangeably. Resources for Computer Science Education Week. Grace Murray Hopper at the UNIVAC keyboard, c. 1960. 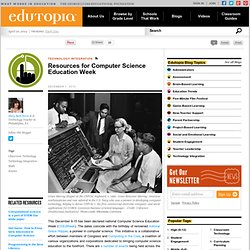 Imagine, if you will, a world where Americans don't teach their children math in elementary school. 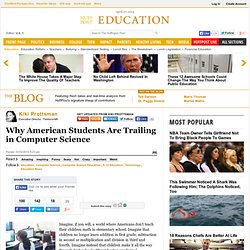 Imagine that children no longer learn addition in first grade, subtraction in second or multiplication and division in third and fourth. Imagine instead that children make it all the way through high school without having any formal presentation of mathematical concepts. Cyhscomputercareers / FrontPage. We will use this workspace to explore computer careers and share this knowledge with other students interested in pursuing computer careers. 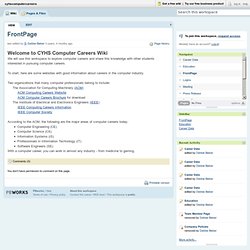 To start, here are some websites with good information about careers in the computer industry. Two organizations that many computer professionals belong to include: The Association for Computing Machinery (ACM) ACM Computing Careers Website ACM Computer Careers Brochure for download The Institiute of Electrical and Electronics Engineers (IEEE) IT Workforce Can't Meet Demand for Cloud Skills CIO. CIO — The cloud computing job market is continuing to mature and as companies define what cloud computing is to them, they will a need a new breed of cross-trained specialists to meet business goals. 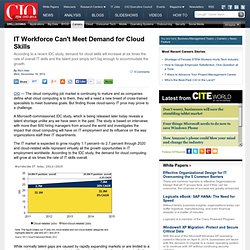 But finding those cloud-savvy IT pros may prove to a challenge. A Microsoft-commissioned IDC study, which is being released later today reveals a talent shortage unlike any we have seen in the past. The study is based on interviews with more than 600 hiring managers from around the world and investigates the impact that cloud computing will have on IT employment and its influence on the way organizations staff their IT departments. The IT market is expected to grow roughly 1.1 percent--to 2.7 percent through 2020 and cloud-related skills represent virtually all the growth opportunities in IT employment worldwide.

According to the IDC study, the demand for cloud computing will grow at six times the rate of IT skills overall. Lack of training Lack of certification Lack of experience.