Learn to Program: The Fundamentals - University of Toronto 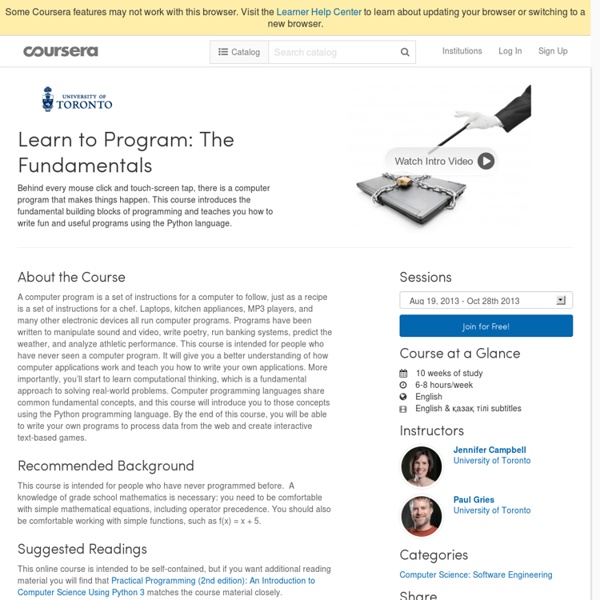 The Python Tutorial Python is an easy to learn, powerful programming language. It has efficient high-level data structures and a simple but effective approach to object-oriented programming. Python’s elegant syntax and dynamic typing, together with its interpreted nature, make it an ideal language for scripting and rapid application development in many areas on most platforms. The Python interpreter and the extensive standard library are freely available in source or binary form for all major platforms from the Python Web site, and may be freely distributed. The same site also contains distributions of and pointers to many free third party Python modules, programs and tools, and additional documentation.

Gamification About the Course Gamification is the application of digital game design techniques to non-game contexts, such as business, education, and social impact challenges. Video games are the dominant entertainment form of modern times because they powerfully motivate behavior.

S189: Introduction to Python - Materials This mini quiz is totally and entirely optional. You don't need to turn it in, it is all for your benefit. You are, however, more than welcome to go over your solutions with the teaching staff, or get help if you are having trouble with any of the problems. Top 30 Python Projects In GitHub There are several repositories for Python language in GitHub and we are providing you with a list of top 30 among them. 1. Django a high-level Python Web framework that encourages rapid development and clean, pragmatic design Understanding Einstein: The Special Theory of Relativity About the Course In this course we will seek to “understand Einstein,” especially focusing on the special theory of relativity that Albert Einstein, as a 26-year-old patent clerk, introduced in his so-called “miracle year” of 1905. Our goal will be to go behind the myth-making and beyond the popularized presentations of relativity in order to gain a deeper understanding of both Einstein the person and the concepts, predictions, and strange paradoxes of his theory. Some of the questions we will address include: How did Einstein come up with his ideas? What was the nature of his genius?

Google Releases Open-Source Online-Education Software - Wired Campus Google has taken what its officials call an “experimental first step” into online education, releasing open-source software called Course Builder in hopes that universities will use it to deliver free online courses. The search giant says it is in talks with edX—a partnership among Harvard University, the Massachusetts Institute of Technology, and the University of California at Berkeley to offer free online courses—though officials declined to comment further. A post on Google’s research blog this week also cited nine universities interested in using the platform, including Stanford University. “We’ve been in touch with a number of universities, and I think it’s a confusing time or an exciting time,” said Peter Norvig, Google’s director of research, in an interview with The Chronicle late Wednesday. “We’re close with Stanford—Coursera and Udacity both came out of Stanford.

Blender Documentation Contents — Blender 2.78.4 39577403d3 - API documentation Welcome, this document is an API reference for Blender 2.78.4 39577403d3, built 2017-01-23. This site can be downloaded for offline use Download the full Documentation (zipped HTML files) Blender/Python Documentation API Info Note Greek and Roman Mythology About the Course Myths are traditional stories that have endured over a long time. Some of them have to do with events of great importance, such as the founding of a nation. Others tell the stories of great heroes and heroines and their exploits and courage in the face of adversity. Open Source Software Open Source Software: Software Revolution Begins Tutorials On Python Programming So you want to be a programmer, huh? Here are 27 ways to learn online Whether you are looking to switch careers and become a full-time programmer, want to try to build a website or app on the side, or are just looking to round out your skill set, learning to code has certainly been something a lot of people have started to do lately. And while being a programmer might not be for everyone, there is a lot to be said about gaining a better, more educated view of how all those pixels get moved around all those screens. Before we delve into our list of learning resources sites, we wanted to share some advice from Marissa Louie, a self-taught product designer for Ness Computing. A former startup founder, Louie told TNW that the hardest part of being self-taught – whether it’s design, programming, or any other discipline is, “gathering the courage. The most important barrier is just to overcome your fears” (she also said having the ability to follow instructions helps as well). F**k it, we'll do it live!

Python Game Development - Learn Python Game Programming Have you always wanted to create your own computer game, but weren't sure how to begin? Are you new to programming and aren't certain if you're up to the challenge? Are you a professional programmer who wants to learn how to make a game? Do you want to learn more about game development? Have you been looking for a step-by-step explanation of how to get started? In this fun and comprehensive python game development course, instructor Alex Bowers will show you how to successfully develop your very own computer game with the Python programming language.

How to Think Like a Computer Scientist — How to Think like a Computer Scientist: Interactive Edition This interactive book is a product of the Runestone Interactive Project at Luther College, led by Brad Miller and David Ranum. There have been many contributors to the project. Our thanks especially to the following: This book is based on the Original work by: Jeffrey Elkner, Allen B. Downey, and Chris MeyersActivecode based on SkulptCodelens based on Online Python TutorMany contributions from the CSLearning4U research group at Georgia Tech.ACM-SIGCSE for the special projects grant that funded our student Isaac Dontje Lindell for the summer of 2013.NSF The Runestone Interactive tools are open source and we encourage you to contact us, or grab a copy from GitHub if you would like to use them to write your own resources.

Learning Enough Python to Land a Job If you want a job programming in Python, prepare to do a lot of work beforehand. The language is easy to pick up, but you need to do more than just learn the basics; to get a job, you need to have a strong understanding of some pretty complex processes. Python is a general-purpose language, which means it isn’t used for just one purpose such as Web development. Rather, it’s used in many different industries, and the industry in which you choose to work will determine how you actually learn the language. For example, if you’re hired to write apps that interact with operating systems and monitor devices, you might not need to know how to use the Python modules for scientific and numerical programming.