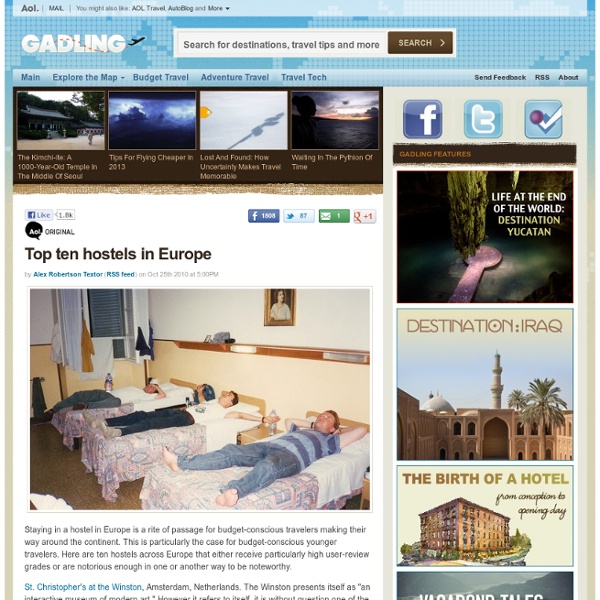 How to Travel Full-Time for $17,000 a Year (or Less!) Wise Bread Picks For the last five years, I've been traveling the world full-time, and for less money than I've ever spent (and I'd wager less money than most people would spend) to live in one place. My worldly possessions fit into one bag (just larger than carry-on size) and a backpack containing my laptop and computer gear. 10 of the Best Places to Hike in the United States The United States is a huge country with tons of variety, so there’s no shortage of awesome places to lace up the boots, get that blood pumping, and take in some amazing views. Want to add US hikes to your trip itinerary? If you’ve been stuck indoors much of the winter and spring, here are ten great places around the country to get out and hike. Zion National Park – Utah With a wide variety of options and a multitude of landscapes, Zion National Park in Utah is a hiker’s and climber’s paradise.

Weekly Frequency Hello to readers in Galway! It’s always interesting when the stars make “confrontation” their default setting. And I’m using “interesting” in that enigmatic and loaded way we’ve come to use the phrase, “May you live in interesting times”—a phrase wrongly attributed to an ancient Chinese curse, but nonetheless part of our modern vernacular. Robert Kennedy used it in his University of Cape Town speech on June 1966. I referred to this speech in May 2012, as we were approaching the first in this current series of seven Uranus/Pluto squares that occur between June 24, 2012 and March 17, 2015, because these squares are part of an astrological cycle that began in the mid-sixties. Indoor Waterpark Resorts to Amp Up a Vacation Visiting a waterpark was once a summertime affair. Now, indoor parks across the country let visitors hit the slides no matter the season. Many such parks are joined to massive hotels, so guests never even have to venture outside. Some of them are even located in close proximity to other major vacation destinations, be it the big city, ski slopes or an amusement park. Kill two birds with one stone by staying at a waterpark resort nearby.

35 Vintage and Retro Free Fonts for Your Designs One of the most important elements of the web designing is the Typography which can change a normal art into an attractive and an elegant piece of art. The most recent and the popular design trend are the retro styled fonts or elements. The right selection and the proper usage of the fonts or typography play an important role in conveying the appropriate message to the clients. The latest trend and techniques of using the retro and vintage script fonts have become very popular in the recent years almost in majority of the small and large scale corporate designs, blogs, online stores, and portfolios. Whenever, you try to use the old style of fonts or designs in any work, it gives an appealing and a creative effect and also uniquely stands out from other works. Usually, the retro styles denote the designs that were popular during the years 1910s to 1930s and when such retro free fonts are used in recent designs, it gives old fashioned personalities, trends, or any objects of the past.

The world’s best secret islands Looking for a romantic spot that's (almost) all yours? Here’s a list from our brand new Best in Travel 2011 guide to reignite your love affair with desert islands, with picks from across the globe. 1. Torres Strait Islands, Australia Image by Killer White Fluff As far as you can go in Oz without falling off the map, the Torres Strait Islands are Australia as it might have been if Europeans had never arrived. I Went on a Wizard Quest A few months ago, I had the most fun I have ever had in my entire life at a place called Wizard Quest in Wisconsin. I've been trying to explain exactly what it is to people ever since, but haven't had much luck. According to their website, it's a "13000-square-foot fantasy-themed labrynth (we call it the quadrasphere)." But that doesn't make it sound anywhere near as awesome as it actually is, so here's a blog about it. If you intend to visit this place in the near future, maybe don't read this blog. It's gonna have a lot of spoilers.